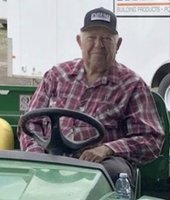 To watch the recording of the livestream pleae click this link:

With heavy hearts we announce the passing of Joseph Kasahoff (aka Diamond Joe) on May 16, 2021, at the age of 83. He was born on August 26, 1937, to William and Susie Kasahoff. His older brother was Peter and his younger sister is Florence Cheveldayoff.

Dad went to Finlayson School until Grade 8 and Saskatoon Technical Collegiate until Grade 10. One of his first jobs was selling cars at a dealership, where we believe his love for buying, selling, and trading things began. He farmed most of his life on the Kasahoff homestead which has been in the family for over 100 years. The Western Producer could be paying us royalties as we think there was rarely an edition that didn’t have some kind of ad from Joe, looking to buy, sell or trade anything from farm machinery, vehicles, RVs to animals.    He attended 1000’s of auctions in his lifetime.  Just when we thought the last auction sale had occurred, he took Covid restrictions in stride and learned about online bidding.

Joe married Marjorie Shukin on July 6, 1957, in the town of Langham. They celebrated their 50th wedding anniversary in 2007. They were blessed with three children: Debby and Darrell (twins) in 1962 and Carol in 1968.

The kitchen table was the hub of the farm.   There, farm decisions were made, cards played, drinks served, friends and neighbours gathered. Hunting and fishing were a big part of dad’s life.  He was happy to show many a hunter the good spots to hunt and made many friendships over the years with numerous hunters from Saskatchewan or Wisconsin.

Joe was a one of a kind guy.  He was an entrepreneur, risk taker, rancher, supervisor, cook, traveller, country music lover, socializer, and gardener.  He taught his children and grandchildren about generosity, compromise, responsibility, financing, investing, and business sense.

He participated in the Doukhobor Society, bread baking at the Saskatoon Exhibition, RM of Corman Park Council, Affinity Credit Union Board, and Borden Care Home Board. Joe retired in 2015, but only for one day.  He found it was the longest, most boring day of his life!!!

A couple of Dad’s wise sayings were “Even a fish doesn’t get into trouble if it keeps its mouth shut!” and “Money is like manure.  It’s no good in a pile – you need to spread it around.”   We all know it was easier for him to say that, than do it.  He will be sadly missed by Kramer Auctions, PBR Auction, Ritchie Brothers, Dakota Dunes, and Gold Eagle Casino.

Due to Covid-19 restrictions, a service by invitation only will be held on Monday, May 31, 2021, at the family farm.  Interment to follow at Bogdanovka (Cee Pee) Cemetery.