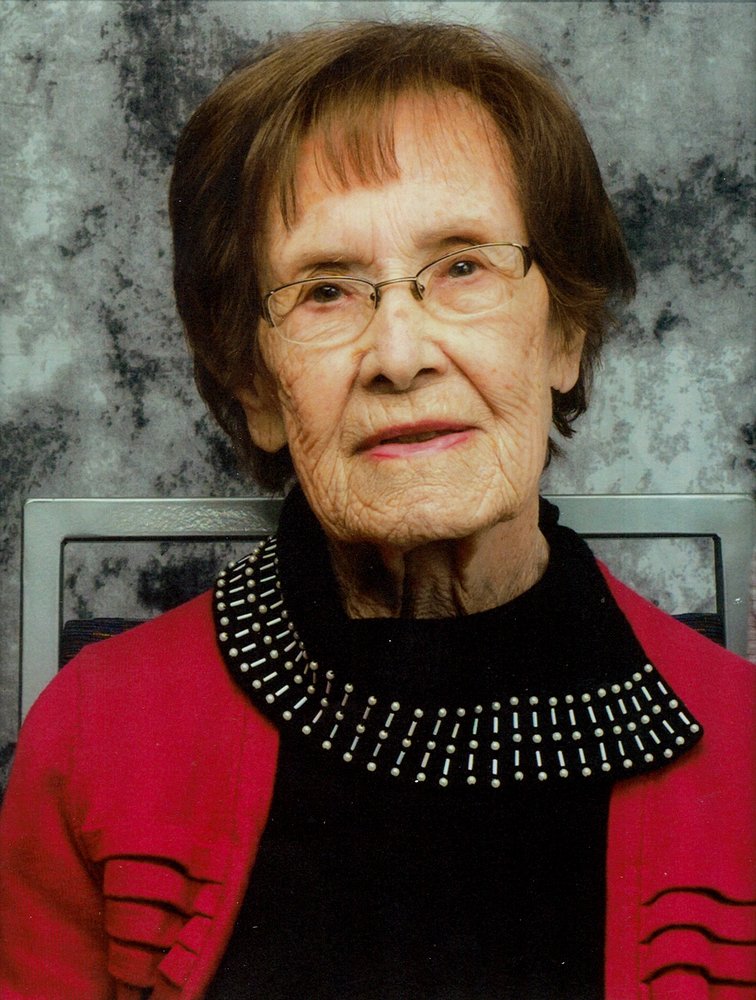 It is with great sadness that the family of Alice Theresa Stevens (Hanley) announce her passing on September 4, 2019 at the age of 90. She will be lovingly remembered by her four children; Murray Stevens of Humboldt, Ron (Shelley) Stevens of Saskatoon, Linda (Wes) Garner of Saskatoon and Shelley (Peter) Friesen of Raleigh NC.

Alice, the youngest in a family of 7 children, was born on March 3, 1929 on the family farm south of Harris. She often talked of growing up in tough times but always had fun with her dog Scotty. She began school at Alluvia school and attended the convent in Rosetown for high school. It was in 1948 she met Lorne at a dance and were married June 1, 1950. They began life in Harris and bought the farm site in 1951 where they farmed and raised their 4 children. She enjoyed her big garden and many visits with Helen Adair, Anne Genest and numerous friends.

She was involved with many community activities as well as Legion, Royal Purple, school and the rink. Alice and Lorne drove the school bus for 25 years, watching the Harris school children grow up. She loved to sing. A highlight in her life was acting in the Ruby Rush play. After retirement in 2000 they moved to Saskatoon to condo living, Alice remaining there for 10 years after Lorne's death. Thanks to Vivian Gordon for your friendship and care. Our whole family was fortunate to celebrate Mom's 90th birthday this past winter where she enjoyed seeing so many friends and relatives.

Alice loved the fun times with family and friends. Great memories were made at Waskesiu and Emma Lake in the summer as well as attending hockey games, recitals and a movie with her great grandkids. They enjoyed flights to Carolina, Christmas at the farm, short trips to Radium, a cruise through the Panama with her brothers and sisters, and winter days with friends in Indio, CA. Thanks to the staff at Warm & Cozy and Flex Unit 2 at St Paul's Hospital for your care. In lieu of flowers, donations may be made in Alice’s memory to the Harris Cemetery, Box 124, Harris S0L1K0

A celebration of Mom's life will be held at Saskatoon Funeral Home in Saskatoon on Wednesday September 11 at 11:00 a.m. Family interment will take place at the Harris Cemetery.

“We love you and will miss having a cup of tea with you.”

Share Your Memory of
Alice
Upload Your Memory View All Memories
Be the first to upload a memory!