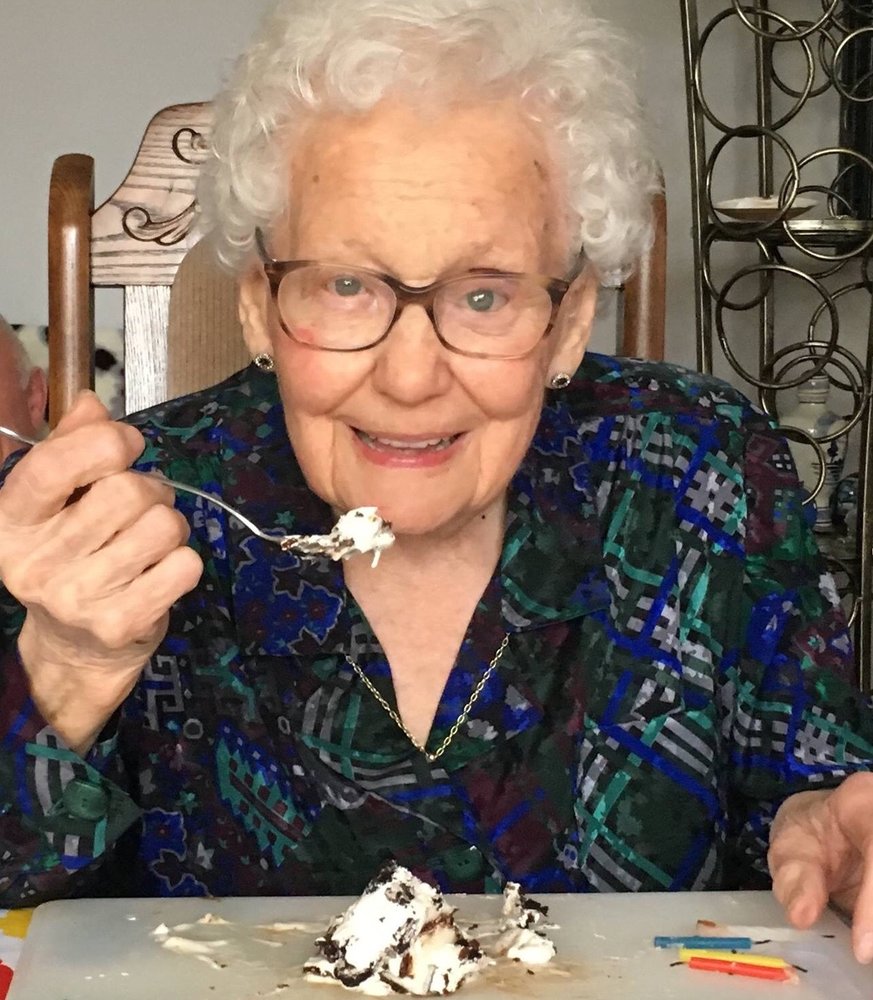 Doreen Elizabeth Ashwin (McConnell) passed away December 20, 2019. Doreen is survived by her sons: Jeff, Jon (Adeline); daughters Beverly (Terry Beaulieu), Patricia (Todd Vogelgesang); grandchildren Jason (Anna) Ashwin, Kristin (Brad) Zurevinski, and Tanner Vogelgesang; brother-in-law Patrick Ashwin (Hamilton); and sister-in-law Myrtle Ashwin (Victoria); great granddaughters Gemma Grace and Ava Jade Ashwin (Calgary), Kendall Marie, Sloane Adeline and Nova Leigh Zurevinski (Saskatoon); great grandsons Noah Luke and Jake Cruz Ashwin (Calgary). Doreen is predeceased by her loving husband Wesley Ashwin, sister Evelyn and her husband Jim Trann, sister Lois and her husband Wally Robb, brother-in-law Jim Ashwin, and her parents Jim and Ella McConnell. Also survived by her grand dogs Lenny, Sally, Bailey, and Annie, as well as many loving nieces and nephews. Doreen took all her schooling in Prince Albert and after completing grade twelve, worked in the Bank of Montreal. During WWII, Doreen served in the RCAF (WD) for thirty-four months. After marriage in 1946, Doreen & Wes began their new life as Wes completed a Mechanical Engineering Degree and then the Theological course at St. Andrew's United Church College. For the next thirty-five years, Wes and Doreen shared their ministry with Vanscoy, Bladworth, Climax, Woodrow, Moose Jaw, Saskatoon and Shellbrook/Leask. Doreen worked as clerk/cashier in Pinders (Saskatoon) and Woodland (Shellbrook) drugstores. Doreen and Wes enjoyed their retirement years in Saskatoon. Being close to their children and families and taking part in leisure-time activities, such as golf, jigsaw puzzles and painting, made for much satisfaction and fufillment. For thirty-five years, our cottage at Buffalo Pound Lake (Tether's End) was a source of peace and refuge. Church was an important part of Doreen's life. She sang in various choirs beginning as a junior in St. Paul's Presbyterian Church in Prince Albert. She was an active member of the Women's groups of the United Church. The Ashwin family would like to thank Villa Royale senior's home and Porteous Lodge for caring for Doreen throughout the years; especially this past year when it has been a little more difficult. Her radiant smile and concern for others before herself will be with us always. In lieu of flowers donations may be made to St. Andrew's College or St. Thomas Wesley United Church. A Memorial Celebration will be held at 11:00 a.m. on Saturday, January 4, 2020 at Saskatoon Funeral Home followed by a reception at the Edwards Family Centre.

Share Your Memory of
Doreen
Upload Your Memory View All Memories
Be the first to upload a memory!