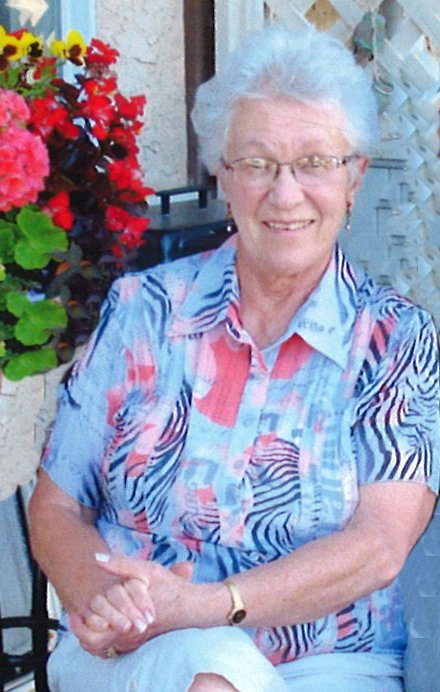 It is with great sadness that the family announces the passing of Mary Osatchoff. Mary passed away on January 7, 2020 in Langham, Sask. at the age of 90. She will be remembered by her two sons, Terry (Cheryl) of North Battleford, Serge of Saskatoon, grandsons Thomas (Joelyn) and Sean and two great grandchildren. Also, her sister Pearl, of Saskatoon, sister in law Helen Hoodicoff of Castlegar B.C. as well as numerous nieces and nephews. She was predeceased by her husband Fred, two sons, Brian and Allen, sisters , Ann, Florence her brother Bill and parents Mary and Bill Verigin. Mary and Fred were married in April, 1948 in Thrums B.C. and farmed on Fred’s father’s homestead near Langham, Sask. Mary was born and raised in Thrums, B.C. and met her husband Fred there .They retired from farming in 1961, then built and ran the Red and White Store, a grocery business, for thirteen years in Langham. Mary and Fred enjoyed retirement and travelled to Cuba several times. Mary enjoyed golfing, curling, gardening, fishing, picking berries and playing Kaiser. Mary sold their house in 2008 and moved to the Yellowhead Manor where she lived for nine years. In 2017 she moved to the Borden Care Home where she lived until moving to the Langham Care Home where she passed away peacefully. The Funeral service will be held on Saturday, January 11, 2020 at 2:00 PM at Saskatoon Funeral Home (338 4th Ave N). Jeanette Stringer will officiate. Interment will be at a later date at Pakrowka (Henrietta) Cemetery. In lieu of flowers, memorial donations may be made to the Canadian Mental health Association or to a charity of choice.

Share Your Memory of
Mary
Upload Your Memory View All Memories
Be the first to upload a memory!