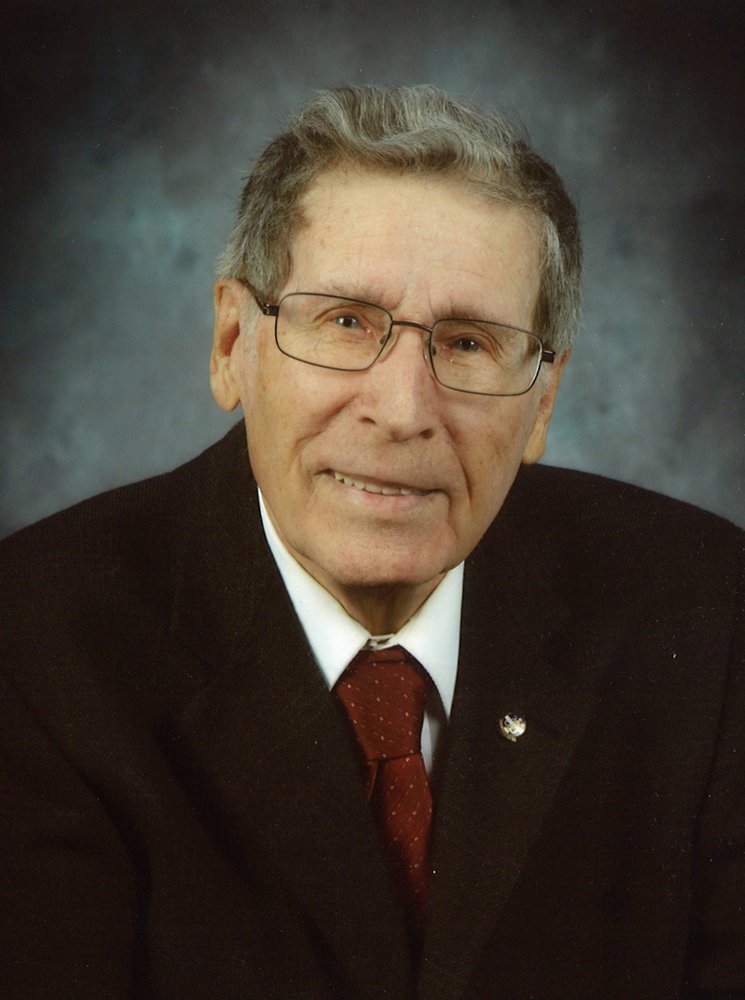 To watch the recording of the service:

Eighteen months ago, our Dad died in his sleep in his home.  At the time we felt that we would wait till the spring to celebrate his life when it was easier for family to travel.  We never imagined that we would be waiting so long to honour our Father and lay him to rest.

Mervin Floyd Tole was born on February 6, 1928 on the family farm in southern Manitoba ,4 miles from the U.S. border.  He was the third child of Orville and Maude. He lost an older brother in a farming accident and was raised with his older sister, Lenore and younger brother Ray.

He received his early education in the local Rosebud School and completed high school in Crystal City.  His first career was with the Royal Bank in Manitou, Manitoba.  That is where he met the love of his life. Elva Bernice Webber. They were married for 63 years and Dad has missed Mom every minute over the past 4 years. They raised four children and made happy, comfortable homes wherever Dad’s career took them. In the mid 60s Merv took the Chartered Life Underwriters program and worked for North American Life and Casualty for a decade.

Always looking for a new challenge, Dad took his Certified Management Accounting Course from the University of Regina and began a career with the Federal Government in Regina.  In 1984, he was awarded a position in Edmonton and remained there till his retirement at the age of 65.  After moving back to Saskatoon to be closer to family, Dad decided to open up his own business, Merv’s Accounting Service and ran this until the age of 86. Dad was a man of many talents and interests.  He loved working with wood and we all benefited from some of his carvings and the lovely pieces of furniture he made. He often drew his creations by hand before he made them from wood.

Another enjoyment of Dad’s was music.  He was a self taught musician and played the guitar and fiddle.  He also loved singing.  He was a member in good standing of the Barbershop organization for over 40 years in the various cities he lived in.  His final group was the Saskatoon Chimo Chordsmen.  Many of us enjoyed the concerts that were put on over the years.   Dad also loved dancing and he and Mom belonged to square dance clubs and went to Polka Conventions all over North America. Dad was a sportsman and active athlete.  He played hockey and baseball as a young man.  He was the founder of a softball league in Regina that welcomed all comers. He took up speed skating in his 40s and competed in the master’s category and then moved to being a referee.  He refereed all over Canada and also in the States so he qualified and was chosen to be a referee at the Calgary Olympics in 1988 as a speed skating line judge.

He also was involved in curling clubs wherever he lived. Gardening was a huge passion of Dad’s and he especially loved roses.  He had a green thumb and the yards were always full of flowers and a vegetable patch. Giving back to the community was important to Dad and he was always involved in some type of community volunteer work.  He was a long time member of Grosvenor Park United church on various committees over the years.  In his last few years, the coffee group from the church was often the highlight of his week.

He was also the business manager for the Saskatchewan Square and Round Dance Federation and was awarded a Centennial Leadership Award in 2005. Travelling and the outdoors were always enjoyed. Camping trips were family fun and Dad enjoyed fishing and duck hunting. Dad had a hearty laugh and always saw the funny side in most situations. He was blessed with great neighbours and enjoyed Sunday suppers with family.

Funeral Services will be held on Saturday, August 7th at 1 pm at the chapel at the Saskatoon Funeral Home. Rev. Nobuko Iwai will be officiating.  A livestream link can be found at Mervin’s Tole Tribute/obituary page at www.saskatoonfuneralhome.com.

Share Your Memory of
Mervin
Upload Your Memory View All Memories
Be the first to upload a memory!
Share A Memory