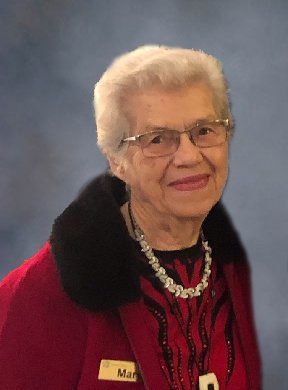 Mary Mantyka, our loving and devoted Mother, Sister, Baba, and Friend was born on March 16, 1928 in Rava Ruska, Poland. She came to Canada as an infant with her parents and settled on the farm in the Cando area.

She was predeceased by her husband Nick (Steve) Mantyka in 1976, her son in law Roy Sangster, and her brothers Leonard, Mike, Bill, and John. She is survived by her four children, Sylvia of Nanaimo, B.C., Don (Angie), Patricia Sangster, and Lillian (Patrick Trimble) of Saskatoon. She is also survived by eight grandchildren, fifteen great grandchildren, two brothers, Paul and Denis and four sisters, Rose, Sophie, Lydia, and Carolyn and numerous nieces and nephews.

Mary lived a full life as a mother and homemaker and was highly skilled at cooking, gardening and sewing. She also operated Syl-Mars Restaurant for over 25 years. Mary was very active in numerous organizations and clubs throughout Saskatoon where she received awards for all her efforts. In her later years, she volunteered with Cloth 4 Kids a weekly sewing group where she had many friends. She was a spit fire with energy to burn.

She lived for many years in the River Heights area and spent her last two years as a resident of Primrose Chateau where she was reacquainted with old friends and met many new friends.

Mary was truly a mother to many.

In lieu of flowers please consider a donation to Cloth 4 Kids a Canadian charity where donated fabric is sewn into clothes for kids in need. More information can be found at clothforkids.ca.

Share Your Memory of
Mary
Upload Your Memory View All Memories
Be the first to upload a memory!