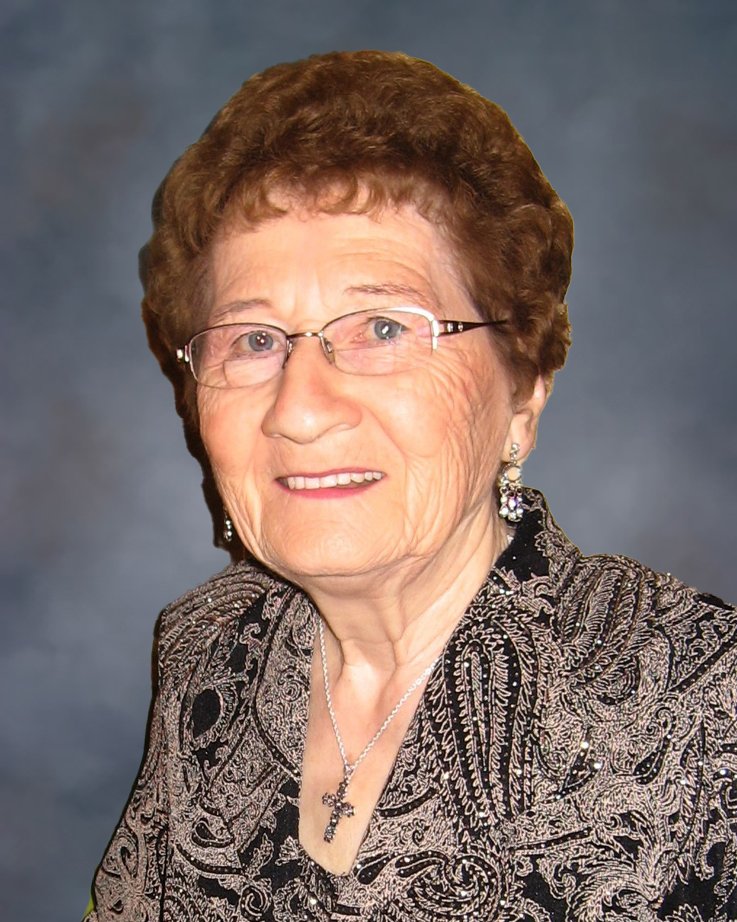 Watch recording of service at https://video.ibm.com/embed/recorded/127426108

The family of Ann Brand is very saddened to announce her passing which occurred on Friday, March 27, 2020 in her home at Columbian Manor in Saskatoon after a brief illness. Ann was 30 days short of celebrating her 95th birthday. She was predeceased by her husband of 46 years, Robert in September of 1997, her parents Nick and Mary Krystyniak in June of 1999 and her brother Joe in 2016. She is survived by daughter Cheryl (Mark), grandchildren Brendon, Lindsay (Mark), Paul (Anna) and great-grandchildren Alex, Hannah and David (Tina); daughter Marlene (Cliff), grandchildren Melissa (Frank), great-grandchildren Finley and Archer, Brianne, great-grandson Hudson, Courtney (Nathan) and great-grandchildren Eliza and Huxley, as well as numerous brothers-in-law, sisters-in-law and nieces and nephews.

Ann was born to Nick and Mary Krystyniak in Lubien Wielki Poland. She immigrated to Canada in 1930 with her mother to join her father who arrived in Saskatchewan in 1928. They farmed north of Borden until 1940 when they moved to Radisson. Ann graduated from high school in 1943 and moved to Saskatoon to take a business course.  Upon graduation she worked in Vonda for two and a half years at Jack Currie Farm Implements. In 1946 she moved to Borden as assistant to Stan Ferguson Administrator of the Rural Municipality of Great Bend. Ann married Robert Brand on December 1,  1951 and took the next few years off to raise her two daughters. In 1962 she returned to the workforce at Foster’s Store where she worked for 13 years.  From 1977 through to her retirement in 1991  she served as Secretary Treasurer of the Borden Union Hospital, a job she truly loved.

Ann provided accounting services to countless people in the community, and she was very active as a volunteer and member of many groups and organizations  in Borden including treasurer of the Borden Museum, Borden Seniors, The Eastern Star, Borden East Telephone Company, Borden Tenant Association and President of the Borden Figure Skating Club. She also served as Treasurer of the Borden Anglican Church until the age of 92.

Later in life she was able to travel to Disneyland, Branson, New Brunswick, take a cruise to Hawaii and Mexico and enjoy trips to Arizona and Las Vegas with her traveling friend Patricia Sheridan.  Ann loved her community of Borden and all the residents  who lived there, young and old. She loved to visit people and take them some of her homemade carrot muffins or boxes of chocolates and she rarely missed coffee time with the regular coffee crew.  In October 2018 Mom left her home of seventy plus years in Borden and moved into assisted living at Columbian Manor in Saskatoon to be closer to her daughters.

Most of all she loved her family and they looked forward to her legendary perogies, cabbage rolls  and buns which made all celebrations special. Mom took great comfort in her church, bible studies and prayer. She was a shining example to all of us as  she was non-judgmental and looked for the good in everyone.

Ann’s daughters would like to thank the staff and residents at Columbian Manor who made her feel loved and at home. Big thanks to Erin Boyce, Sandra Nourse and all the HomeCare nurses and aides who enabled Mom to live in her home till the end of her life. Also a big thank you to Rev. Sheldon and Roseann Carr who not only provided spiritual care but became good friends.

A Celebration of Ann’s life will  take place in Borden at a later date and will be announced in a future edition of this newspaper.  In lieu of flowers the family requests that charitable donations be considered to the Saskatchewan Abilities Council, Cosmopolitan Industries or St. John’s Borden Church Accessibility Fund.

Share Your Memory of
Ann
Upload Your Memory View All Memories
Be the first to upload a memory!