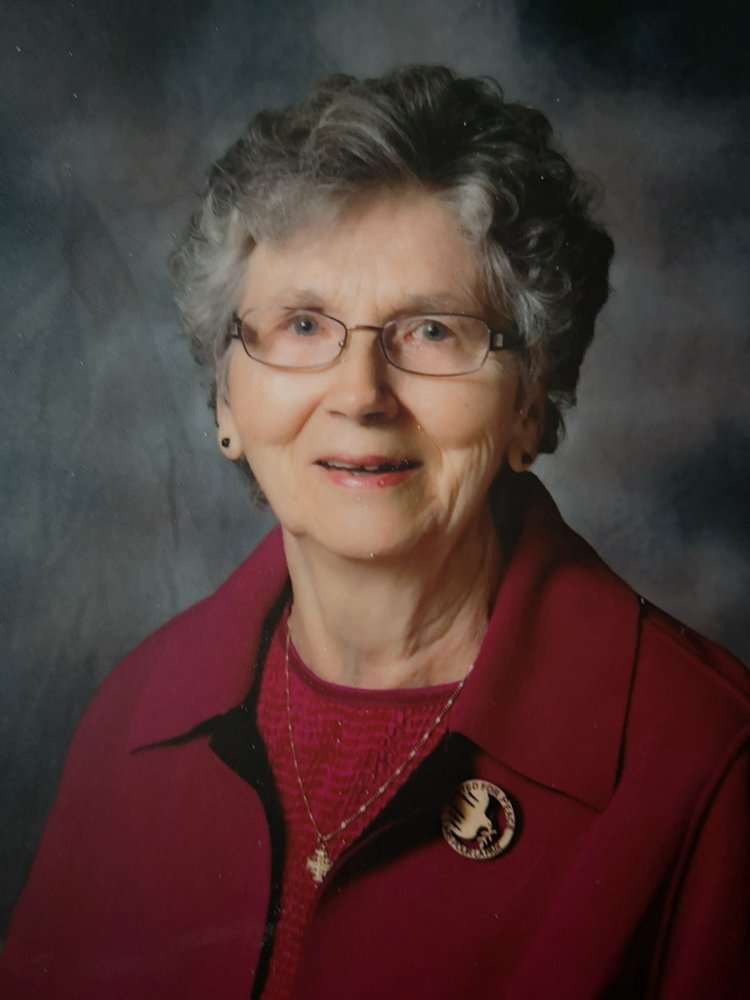 To Watch Recorded Video of Service click this link:
https://video.ibm.com/embed/recorded/130847904

It is with great sadness that the family of Mildred Anne Morrison announce that she died at her home (as was her wish) in Saskatoon on April 25, 2020.

She is survived by her husband, Rev. Dale Morrison, her daughter, Yvonne (David), and her son, Greg (Kaylea Dunn).  She is also survived by 10 grandchildren: Michael (Colleen); Elizabeth (Ghislain); Matthew; Stephanie (Trevor); Daniel (Karissa); Sarah; Charles; Madison; Lily and Pearl; and by 4 great-grandchildren: Daniel; Alexander; Brimley; and Theodore; and brothers John (Fae) and Donald (Marjorie); sister-in-law, Dorothy; and many nieces and nephews.

Mildred attended Elementary and High School in Alameda.  She was involved in CGIT; Camp Wabamasqua as a leader and lifeguard; choirs; the 4H Calf Club; hockey; curling; and baseball (where she got her fancy-shaped little finger).

Mildred graduated from the Moose Jaw Union Hospital School of Nursing in 1955, and then began her career as an RN at the Weyburn General Hospital.  She worked for several months at the Vancouver General Hospital to save money for a VISA, which allowed her to work for a year at St Ann's Hospital in Juneau, Alaska.  This was an adventure that she always treasured.

Returning to Saskatchewan in March 1958, Mildred was employed at the University Hospital in Saskatoon until she and Dale were married on November 10, 1958 in Alameda.  Their first home together was in Luseland, SK. As they moved from one community to another (Balcarres, Wynyard, Jamestown, ND, Winnipeg, MB, Revelstoke, BC and back to Saskatoon), Mildred continued her nursing career, and took part in a variety of community and church activities. Mildred continued cross country skiing for many years, and swimming until only a few years ago. Mildred enthusiastically followed her children’s school, music and athletic endeavours. She was proud of her 65-year membership in the Order of the Eastern Star.

Mildred was a patient, loving wife and mother, a devoted friend, and a neighbour who was always willing to offer a helping hand.

Some onlookers saw only the casual, famously funny side of Mildred’s character, but those who knew her best could glimpse the burdens she carried, the pain and sorrow she endured, and her enormous inner strength.  Her family adored her, and her true friends admired her.  Mildred, herself, was truly humble and utterly faithful. We have been blessed to be sheltered by her love, inspired by her faith, and saved by her honesty and wit from taking ourselves too seriously

The family is grateful to Dr. Jared Prisciak and the staff at the Lakewood Clinic; the Saskatoon Health Region Palliative Care Team; the McClure Place Staff; and to friends and relatives who have been thoughtful and caring in many ways.

Donations in Mildred’s memory may be made to the McClure Place Foundation, 1825 McKercher Drive, Saskatoon, SK S7H 5N5, to the Canadian Cancer Society, or to a charity of your choice.

A Service of Remembrance will be led by Rev. Debra Berg and Joan Brown on Saturday, August 28th, 2021 at 1:00 pm at McClure United Church (4025 Taylor Street East) followed by a reception prior to Interment at the family plot at Woodlawn Cemetery.  For those unable to attend in person the service will be livestreamed and can be accessed by the link on the top of the tribute page.

Share Your Memory of
Mildred
Upload Your Memory View All Memories
Be the first to upload a memory!