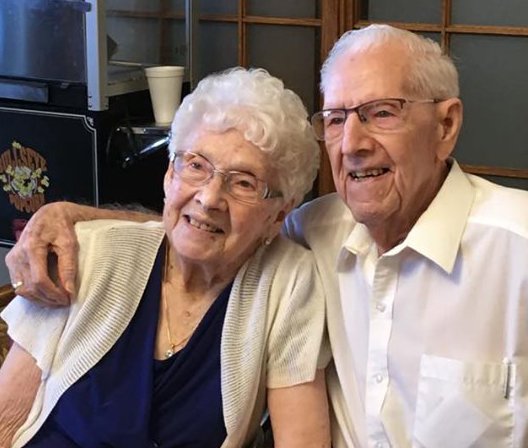 We are sad to announce the passing of our mother Jean Pateman at home in Warman with her family by her side on May 8th 2020.

Jean Allison was born on June 10th 1923, the oldest of twin girls to James and Nell Nickason on the farm south of Wiseton Saskatchewan. The girls weighing 3 ½ and 3 pounds respectively, spent the first few weeks of their lives wrapped in cotton batting and in shoe boxes on the oven door. They took all of their schooling in Wiseton and after grade 12, Jean went to Normal School in Saskatoon to become a teacher. Her first school was at Rosetown. The next year she went to Glamis Saskatchewan to teach where she met the love of her life, Clifford Pateman. They were married on May 12th 1944 in Wiseton.

Cliff was an Aircraft mechanic in the Airforce stationed at Trenton Ontario. After a brief honeymoon, he headed back to Trenton and Jean went to Glamis to finish out the school year. Then she joined him in Trenton. Their oldest daughter Gail was born the following May and with the war being over, Jean and Gail came back to the farm in Saskatchewan and Cliff went to Gimli Manitoba. He came home in time for harvest and continued to farm with Jim Nickason. Daughter Linda joined the family in 1946 and John in 1948.

When the kids reached school age, a house was built on the south side of Wiseton and so began an exodus that lasted for 10 Years. Spring and fall saw chickens and pigs loaded into the grain truck and cattle were herded down the 4 ½ miles to town. Son Ken completed the family in 1953.

Jean was kept busy looking after 4 kids, helping on the farm and raising a large garden every year. She loved flowers and there were many summer brides in the community who had sweet peas and gladiolas from her garden on their bridal tables. Jean was a lifetime member of the Sterling Rebecca Lodge holding many of the executive positions over the years.

In 1974, with the kids all gone from home, they sold the farm to nephews Lyle and Wayne Nickason and moved into Saskatoon where Cliff worked with a friend doing carpentry work and Jean worked the early shift at McDonalds for 11 years

They enjoyed dancing and meeting with friends, traveling and spending time with family, Especially the grandchildren. Winter would find them at the bowling alley. The last year they bowled they were 93 years old. Dad had also bought a truck with a camper and a boat and many weekend were spent fishing at various lakes by themselves or with other family members.

Though they lived in Saskatoon, Wiseton was home and they never missed an opportunity to join with friends and family there for any event that was happening.

In lieu of cards or flowers, donations can be made to the charity of your choice. There will be no funeral service at this time, but a celebration of Jean’s life will be held at a later date.

Share Your Memory of
Jean
Upload Your Memory View All Memories
Be the first to upload a memory!