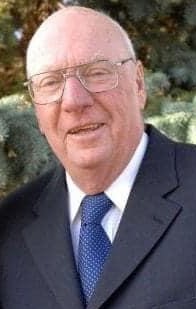 It is with great sadness that the family of Keith William Carroll announce his passing on June 19, 2020 after an extended battle with cancer.  He was predeceased by his sisters Estelle and Maxine, and by his parents William (Bill) and Kathleen.

He is survived by his wife of 56 years, Jean (nee: Hicks), daughters Kathleen of Ottawa and Deanna (Tom Ursino) of Edmonton, son Devon (Carrie) of Saskatoon and stepson Wayne (Shirley) Hicks of Semans.  He will also be missed by his six grandchildren:  Tanis, Trevor, Sydney, Zach, Samantha and Max; as well two great-grandchildren, Kaden and Kale.

Dad was born in Saskatoon on October 26, 1935.  He was raised in a railroading family, growing up in the CN station in Rabbit Lake, SK.  Although he had a lifelong love of steam trains, and an interest in joining the railroad, he ultimately went to the Saskatoon Business School and later the University of Saskatchewan to become an accountant.  He spent his career with the Saskatoon Co-op as an accountant, finishing his career as the Controller.  After his retirement from the Co-op, Dad went on to have a Mac’s Store and to work as a business consultant at the Business Development Bank.

In his youth, Dad was an avid ball player which likely contributed to his passion for  sports (Go Riders!!), in addition he was passionate about his family and spending time with his friends indulging in the odd Lemon Hart (rum) and coke.  Dad enjoyed music and dancing and, as the number of rums increased, so too did the volume of the music and singing – Elvis and the Irish Rovers were among the favorites.  He also loved road trips, as our frequent treks to the mountains and the west coast can attest.  He had a great love for Saskatoon, both the history of the city and the city it is today.

Most of all, Dad was dedicated to his family and set the example for us to become honest caring adults, with a dose of stubbornness and sarcasm thrown in.  His caring manner, sly smile and sense of humor will be greatly missed.

Special Thank You’s go out to Dr. Enweani, Dr. Sami and the staff of the Cancer Clinic for their wonderful care over the past several years, and to the home care team for the compassionate end-of-life care they provided
In lieu of flowers donations may be made to the Saskatoon SPCA or the Cancer Foundation of Saskatchewan.

Share Your Memory of
Keith
Upload Your Memory View All Memories
Be the first to upload a memory!