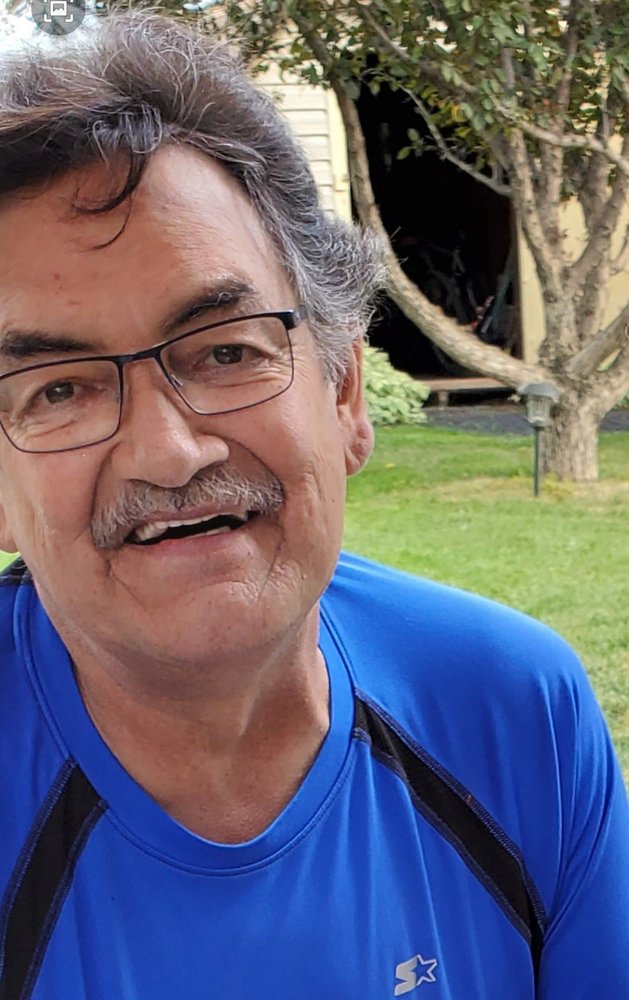 To Watch Live Stream of Service click this link: https://video.ibm.com/embed/recorded/128367844

Mickey was born on May 13, 1952 in the village of Ile-a-la-Crosse, Saskatchewan to father Jean Marie and mother Marie Rose. He grew up on Fort Black Island on Lac Ile-a-la-Crosse with his parents and siblings. He was close with all of his siblings, partly due to living together in a two-room house, and he had many fond memories of growing up on the island. He was an avid and skilled outdoorsman, having learned to hunt, trap, and fish from his parents and siblings. Mickey attended school in the village of Ile-a-la-Crosse, then moved to Prince Albert at the age of 14 to finish high school. He later moved to Saskatoon and attended Nutana Collegiate. These were some lean years for Mickey, and he learned to improvise meals with what he had on hand (his children never inherited his fondness for bologna and jam sandwiches). He was unable to finish high school as a teenager because he needed to start working to support himself. He would later go on to complete his GED in his fifties, not because he needed to, but because it was important to him. Mickey began a carpentry apprentice program in the mid-1970s. He achieved his journeyman carpenter designation in the early 1980s.

Mickey met Janice Olson in 1974 and they married in 1975, on the anniversary of their first date. Mickey adopted Janice’s daughter Shannon, who was four years old at the time. Tammi was born later that year, and Matt was born in 1984. After living in various areas of Saskatoon, Mickey and Janice built their family home in the Dundonald area in 1979. Mickey took great pride in being able to build his own home, and he and Janice lived there until 2016, when they decided to downsize.

Mickey was well-known as a hard worker, and was never one to complain, even when his health was deteriorating. He worked in the construction and mining industries for many years, then worked independently as a siding installer for over 15 years. Mickey spent the last four years of his life doing caretaking and maintenance work at Rock of Ages Lutheran Brethren Church, of which he was a long-time member. Spirituality was an important part of Mickey’s life. He was brought up in the Catholic church, and he later joined the Lutheran-Brethren church after marrying Janice. He formed many lifelong friendships there, and some of his favorite times were lunches he shared after Sunday Services with Janice, friends, and family at Mano’s.

In addition to his strong work ethic, Mickey was known for his upbeat nature and sense of humour. He was rarely seen without a smile on his face. He loved children, animals, and the occasional practical joke. He often spoke of his father’s sense of humour and the jokes the family would play on each other back on the island. He was also known for his caring and generous nature. When people speak of someone who would give you the shirt off their back, Mickey is the person they are talking about. No one was a stranger to him, and one of his grandsons recently commented that when they went to Ile-a-la-Crosse, Mickey couldn’t walk fifteen feet without meeting someone he knew. Janice often noted that shopping in Saskatoon always required extra time due to all the people Mickey would stop and talk with. Mickey loved music, and grew up listening rock and country. Some of his favorite artists were The Beatles, CCR, and Johnny Cash. He enjoyed playing guitar from time to time, and (as we recently found out) played in a CCR cover band as a teenager. He also loved Christian music and had many favorite hymns.

Mickey’s greatest joy in life was his family. He adored Janice and bought her fresh flowers every week. He was proud of his children and loved his grandchildren more than anything. “Papa Mickey” was a name he wore proudly. He was always there for his family, whether it was helping build a fence, or coming out in 40-below weather to help change a tire. He was a selfless man with a big heart. He lived his life with integrity, and though he appreciated the same in others, he never expected it. Mickey was one of the least judgmental people you could ever meet, and he always chose empathy over anger.

Mickey’s family would like to thank all the wonderful staff at St. Paul’s Hospital, not only for the excellent care he received in his final days, but also for the care he was given during many admissions over the years. In particular, we would like to thank Mickey’s nurse Shawn in the ICU. He went above and beyond to make Mickey comfortable in his final hours, and he provided professional and compassionate care to our family as well.

Due to current public health concerns, Mickey’s funeral service will be limited to immediate family only. The service will be streamed online on October 27th, 2020 at 1:00 p.m. and can be viewed at www.saskatoonfuneralhome.com For those unable to view at that time, the service will remain available on the website for later viewing.

Share Your Memory of
Magloire
Upload Your Memory View All Memories
Be the first to upload a memory!