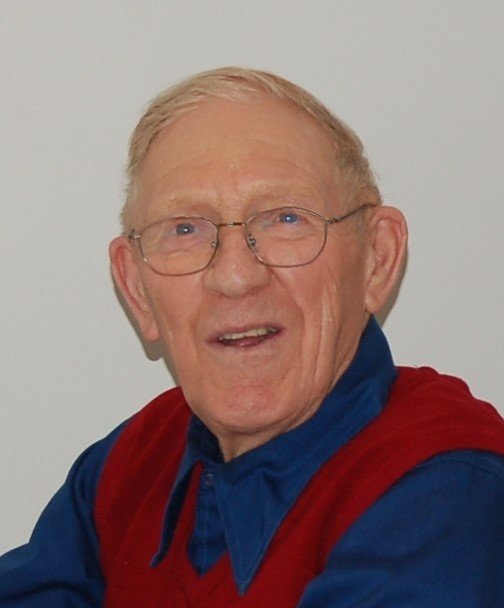 Murray Sheldon Schollar passed away peacefully at the age of 94 surrounded by his children at the Royal University Hospital on October 18, 2020.  He was born October 10, 1926 in Craik SK to Arthur and Ethel Schollar.  He is survived by his children Ruth (Marcel) Gosselin, Lorna (Jake) Hoyles, Ronald (Darcy) Schollar, Karen (Greg) Lopaschuk, grandchildren Jasmine (Miles) Geres, Aaron (Emily) Gosselin, Jesse Gosselin, Tabitha (Troy) Schollar.  He is also survived by his brother Sterling.  Murray is predeceased by his parents, his wife Doris, sisters Velma, and Muriel, and brothers Glen, and Lorne.

Murray was born and raised in Craik SK.  He worked briefly in the mines in Alaska before returning to Craik to farm.  He married Doris Nancekievill on March 29, 1958 and they were married for almost 56 years. They farmed first at Craik, then at Penzance, and finally at Hanley until they retired and moved to Saskatoon in 1981.

Upon retirement Murray and Doris enjoyed travelling, including trips to Yellowknife NWT, Victoria BC, across Canada to Deer Lake NL, Idaho, Oregon, and Washington.

He was active in his church including working many summers in the kitchen at the summer camp church in North Battleford.

Murray spent many hours building and fixing things in his garage.  This included building dozens of salt boxes and trailer pads.  He enjoyed figuring out how to fix items the neighbors would bring to him and was always willing to lend a helping hand.

He enjoyed gardening and became a Master Composter.  He grew to know many of his neighbors as they brought over leaves and grass clippings in return for rich compost.  He planted a full garden every year including this past summer.  He enjoyed sharing his bounty of tomatoes, cucumbers, and potatoes with his family, neighbors, and friends.

Murray was very social and enjoyed meeting and talking to people everywhere he went, and usually could be counted on for a joke or two.

Because of the current Covid situation regarding large gatherings, and because so many of his family and friends attended his 90th birthday party (which he always claimed was the best birthday party ever thrown) there will not be a public funeral.  His immediate family will lay him to rest at a private graveside service.  For those who wish, a donation may be made to a charity of your choice.

Share Your Memory of
Murray
Upload Your Memory View All Memories
Be the first to upload a memory!
Share A Memory