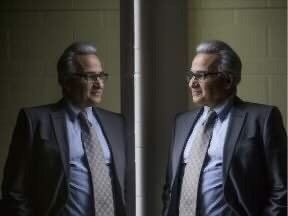 A private Mass of Christian Burial will be held at St. Paul's Co-Cathedral on Tuesday, November 17, 2020 at 9:30 a.m. A link to the virtual service will be posted at https://www.mykeeper.com/profile/JosephGarcea/.

It is with heavy hearts and deepest sorrow that we say goodbye to our amazing and loving husband and father, after a long and hard-fought battle with cancer.  Joe was a shining light, full of love, and compassion. Despite his many accomplishments he had the humblest of spirits.

Joe was incredibly proud of his children and grandchildren. He found joy in watching his kids grow and despite the pressures of the outside world was never to tired or busy to help with homework, or to attend countless soccer matches, hockey games, or dance recitals.

Joe was born in Satriano Italy, where he spent the first ten years of his life with his mother, Carmela. He was reunited with his father (Michele), brother and sisters in Jasper, Alberta in 1965. While always true to his Italian roots, Joe had a profound love for Canada and all things Canadian (including Les Canadiens), and described coming to Canada as having “arrived in paradise.”

As a professor of political science at the University of Saskatchewan, Joe was a prolific scholar who published in the areas of immigration, settlement, public administration, and local government.

Professor Garcea was particularly passionate about mentorship, civic education and was well known for his astute political commentary; he believed deeply in the importance of community service and always found time to volunteer on local associations, coach, and even maintain the local outdoor hockey rink.

Despite significant personal adversity, Joe achieved several honors and distinctions throughout his lifetime. He was the recipient of both the University of Saskatchewan’s Master Teaching Award and Distinction in Outreach and Public Service. Joe was honest, just and never afraid to speak truth to power. His fearlessness was put on display in 1999, when he was appointed by the Premier of Saskatchewan to lead the Task Force on Municipal Amalgamation and travelled the province to consult and meet with Saskatchewanians, who were sometimes not eager to hear his message.

Special thanks to Dr. Marlys Misfeldt for her years as Joe’s GP, all the doctors who formed part of his care team at RUH, as well as all of the nursing staff.

A private Mass of Christian Burial will be held at St. Paul's Co-Cathedral on Tuesday, November 17, 2020 at 9:30 a.m. A link to the virtual service will be posted at https://www.mykeeper.com/profile/JosephGarcea/. Pending Covid-19 restrictions a public memorial service will take place in 2021 with the chance to celebrate Joe’s life. In memory of Joe, please volunteer, support your local community including those in need, and don’t forget to vote! In lieu of flowers, donations may be directed to the University of Saskatchewan’s Indigenous Student’s Centre.

We love you Dad, you are irreplaceable.

Share Your Memory of
Joseph
Upload Your Memory View All Memories
Be the first to upload a memory!