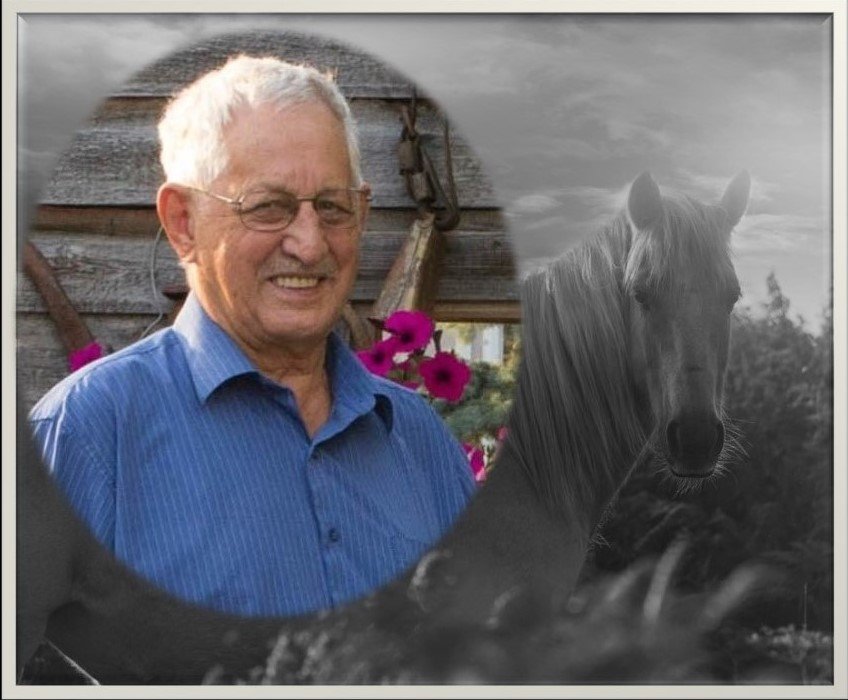 After almost 91 summers since his birth on the 22 of July in 1930, Herbert Leonard Wourms was welcomed home on New Year’s Eve, 2020. He was lovingly greeted by his parents, Mary and Raymond Wourms, sister Irene (Gobeille), and brothers Paul and Edwin.

Born in Morinville, Alberta, Herbert was raised in St. Walburg, Saskatchewan on the family farm. His love of horses developed early and remained with him all his life. While he never liked the nickname Herbie, many of the folks around St. Walburg still refer to him that way.

In 1954 he married the love of his life, Vera Trotzuk, and together they raised five (5) children, Patricia, Beverly, Brian, Lorna and David. Their August 9th wedding is still remembered, by anyone who attended, as the highlight of that summer. They were married for 66 years.

Herb was a truck driver for over 16 years and won many safe driving awards. He criss-crossed the prairies, travelling thousands of miles each year.  As children we always looked forward to his return home, as he would often bring us left-over macaroon cookies, sugar cubes wrapped in paper, and salt sticks from the potash mine.

In 1973 Herb and Vera moved from Saskatoon and purchased the general store in Marengo, Saskatchewan where they lived and worked for 34 years.

Herb was a skilled carpenter, mechanic, and a true jack of all trades.  Carpentry was a passion throughout his life. Many phones calls were made to dad when a home DIY project went sideways. Dad had a great sense of humor and loved a good water fight or practical joke.

Herb’s greatest treasures were his nine (9) grandchildren; Karrie, Roxanne, Samantha, Jesse, Jameson, Garret, Brianne, Hyacinth and Emilie; in addition to his five (5) great-grandchildren, Aidan, Charlotte, Astrid, Theo and Slayden. He would look daily on his computer for new photos or videos of the little ones.

Recently Herb & Vera moved back to Saskatoon to reside one block from their original family home in the city. Herb battled lung disease and cancer for years before his passing.

In lieu of flowers the family requests a donation be made in his name to a horse or dog rescue group. As per dad’s wishes, no service will be held.

The family wishes to thank the professionals at St. Paul’s Hospital for his care during his last days and acknowledge the amazing staff at Preston Park I Senior’s Residence for their continuous and on-going support.

Dad’s final arrangements are being handled by the caring staff at Saskatoon Funeral Home.

"We are all just walking each other home.”  Ram Dass

Share Your Memory of
Herbert
Upload Your Memory View All Memories
Be the first to upload a memory!