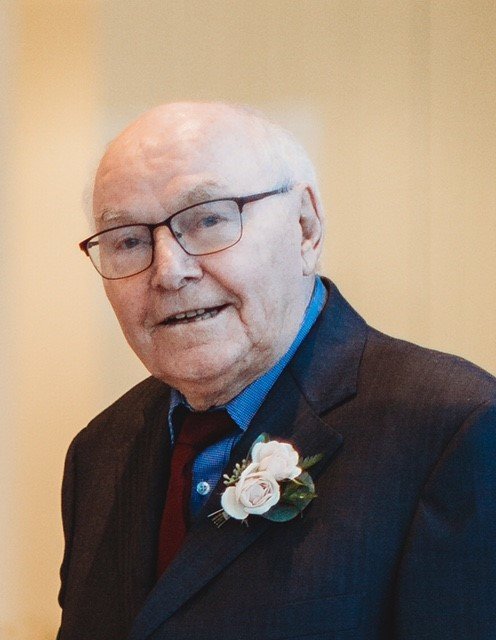 To watch the recorded version of the Service click this link:

It is with deep sadness the family of Lyle Broadfoot announces his passing on Sunday, February 14, 2021, at the age of 93.

Lyle lived a long and amazing life, he was born on January 12, 1928 to Tom and Margery Broadfoot in Watrous, Sask.  The family later moved to Star City where Lyle met his wife Dorothy (Travers).  Lyle and Dorothy were married, November 15, 1949 and shared a remarkable 71 years together.  They lived and worked in Codette, Melfort, Regina, and eventually moved to Saskatoon in 1964.  Lyle worked for The Rent-It Store where he soon became an owner.  The business still remains in the family, and is a legacy of which he was very proud. He and Dorothy continued to visit the store every Thursday for coffee, right up until the winter of 2019.  Lyle also worked for Acklands and owned Business Furnishings Ltd, until he retired.

Lyle gave many years of service to the community.  He was a member of the Saskatoon Cosmopolitan Club, President and Governor of the Western Region; President of Cosmopolitan Industries (1990-91), volunteered for City Hospital Foundation, and The Festival of Trees.  In 2003, he was honoured with the Saskatoon B’Nai Brith “We’re Proud of You” Award, for his volunteer service to Saskatoon.

Although he was hard working, his family was most important and always came first.  He spent many hours in hockey rinks, at ball diamonds, and at music and dance venues, supporting his grandchildren.  He was their biggest fan.

Lyle and Dorothy spent many happy years at their cottage at Emma Lake.  They always looked forward to May so they could move up to the lake for the summer, to enjoy golfing and getting together with all of their lake friends.

Lyle was honest, kind and caring.  He had a wonderful sense of humour, a positive attitude, and he was a true gentleman.  He loved and was loved by his family and friends and he will be greatly missed.

A Service of Remembrance will be held on Tuesday, February 23rd, 2021 at 2:00 pm.  Due to COVID restrictions, the service will be held for immediate family only.  The live streaming link is available for those who wish to join the family, on the day of the Service, and will be at the top of this page.

In Lieu of flowers, donations can be made to the charity of your choice.

Share Your Memory of
Lyle
Upload Your Memory View All Memories
Be the first to upload a memory!