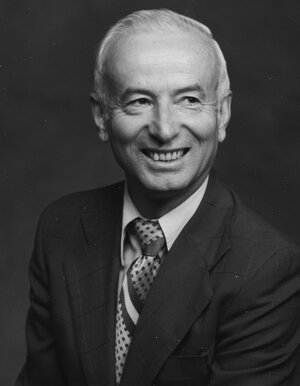 Lou was born on March 3, 1925, on a farm near Hepburn, SK to Anna and Henry Janzen. He was the fourth of five children and grew up in a small Mennonite farming community. Lou moved from Hepburn to Saskatoon after WWII, working at various jobs until he found his life long calling as a realtor. He met Muriel Davis in Saskatoon and the two were married in 1954. Their two children soon followed. The family spent summers farming near Harris, and winters in the Avalon district in Saskatoon.

In the early 1950's, Lou became a licensed realtor in Saskatoon and went on to become the President of the Saskatoon Real Estate Board in the early 1970's.

Lou was passionate about the business of real estate, and he also cared deeply about doing "the right thing" for his clients. As a result, Lou ventured beyond strictly acting as a realtor. In the 1960's, Lou and a group of partners took a risk to develop a few affordable townhomes together and after that success, they went on to develop many more. Lou also built another successful business providing homes and the financing for those homes to individuals who did not qualify for traditional bank mortgages. He and his partner, Lisle McCallum, were very proud of this business that provided an opportunity to numerous families who otherwise would not have become home owners.

Lou enjoyed many active years in real estate and is fondly remembered in the industry for his wonderful sense of humour, upbeat outlook and willingness to help out the next generation. Above all, Lou is remembered by his peers for his honesty. He was highly respected; a true gentleman, who always had a smile.  Family meant the world to Lou. When he became a grandfather in 1985, another side of Lou emerged. Lou loved to get on the floor and wrestle, play with, and truly enjoy his grandchildren. He loved learning about what his grandchildren were doing in their lives, actively supported them in their life and career goals, and, most importantly, nurtured meaningful relationships with each of them. Even as a great-grandfather in his 90s, Lou readily enjoyed cuddling with his great grandsons and even 'raced' them around Preston Park on his walker. Lou would light up when family was coming to visit him, and he eagerly looked forward to every visit or phone call.

Lou's charisma, sense of humour and joy for life continued with him through to his final days. During the weeks leading up to his passing, numerous family members, friends, caregivers, and colleagues visited and/or shared their gratitude for the opportunity to be a part of Lou's life. Lou truly epitomized being a good, kind, thoughtful person. He will be dearly missed.

Lou's family would like to extend thanks to the amazing staff at Preston Park II. Your care and kindness brought much joy to Lou's life.

A celebration of Lou’s life will be held on Monday, July 18, 2022 at Saskatoon Funeral Home beginning at 11:00 a.m. In remembrance of Lou, the family welcomes donations to KidSport Saskatoon or the Alzheimer Society.

Share Your Memory of
Louis
Upload Your Memory View All Memories
Be the first to upload a memory!
Share A Memory