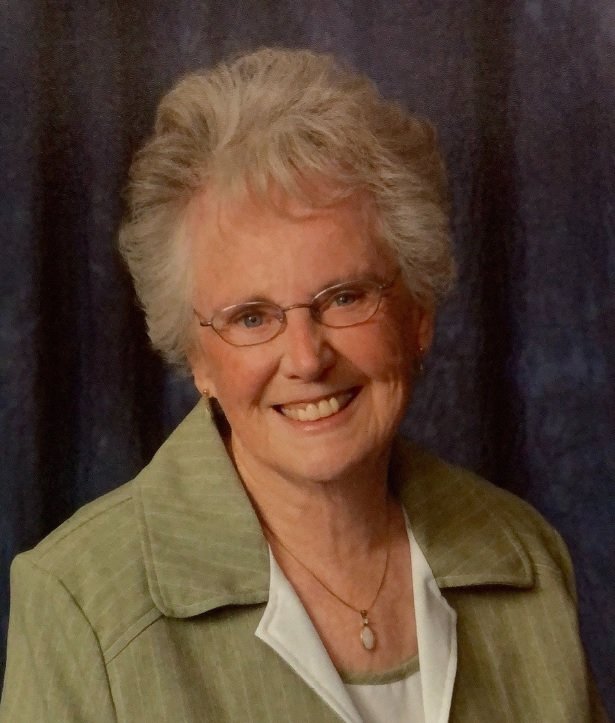 To Watch Video Recording of Service click this link:
https://video.ibm.com/embed/recorded/130750951

Pat was born to Irish immigrants Samuel Nealy Hillen and Margaret Stuart Hillen on March 17th, 1935, in Collingwood, Ontario.  Sam was the Nottawasaga Lighthouse keeper on Georgian Bay from 1933-1942, and Pat had fond childhood memories of growing up in this unique setting.  When his time was done in Collingwood, Sam and Maggie moved their family back to Toronto, and it was here where Pat spent the rest of her youth.

Pat met her future husband Cliff while working in a bakery in Toronto.  They were married on October 31st, 1952, and shortly thereafter moved out west to settle in Saskatoon, Saskatchewan.  Pat was suffering from arthritis, and they hoped that moving to a drier climate would help alleviate her discomfort.  They soon began a family and welcomed two daughters, Gail, and Faye.  In addition to being a loving wife and mother, Pat also worked outside of the home for many years in the orthodontic offices of Dr. Hill.

During their years together, Pat and Cliff enjoyed camping and canoeing, and they spent many summers in their Boler, and later larger camper, which they frequently parked at Namekus Lake.  They also enjoyed travelling across North America visiting family and friends. Pat loved curling— both playing it and watching it on TV.  She also relished any opportunity to play a round of golf.  Family suppers were especially a treat if Pat made roast beef and scalloped potatoes— her gravy was legendary!

The image of a lighthouse is one that will forever be associated with Pat not only because she was “born in a lighthouse”, but because she was a beacon of light and love for those who knew her.  Her circle of friends and acquaintances was vast—if you were ever at her house on her birthday, you knew that her phone barely stopped ringing.  She was always touched by the letters and phone calls from her nieces, nephews, cousins, and friends.  Birthday and Christmas cards were always proudly on display, and her refrigerator was often covered in newspaper clippings and photos featuring various loved ones and their accomplishments.

Pat was generous with her time and with her talents.  She was a dedicated knitter and made many blankets and tuques for premature babies at the Royal University Hospital, in addition to all the blankets, scarves, sweaters and mitts that she lovingly crafted for friends and family.  She was also a constant supporter of all her grandkids’ sports and activities.  Many hours were spent driving Jean-Marc and Gaétan to rowing or kayaking lessons down on the river, and many fingers were pricked while sewing dance costumes for Cara and Chloé.  She was proud of us, and we were always proud to have our Nanny out in the crowd cheering us on.  Pat was also a constant supporter of her daughters’ interests and endeavours even into adulthood.  Gail recalls all the hours that her mom spent learning lines with her for her various plays and how grateful she was for the many times her mom could come and watch the finished productions.  Faye enjoyed welcoming her sorority sisters for meetings at the house and spent many Sunday mornings attending church with her mom.   Her great-grandson, Zack, fondly remembers doing endless crossword puzzles and just spending quality time with Nanny.   While Théo and Éloise are still quite young, they enjoyed visiting with Nanny, giving her hugs, and sharing smiles and giggles.

Her departure will leave a large hole in the lives and hearts of many, but her legacy of kindness, love, and laughter will live on through those whose lives she touched.  A Service of Remembrance will be held on Friday, July 30th at 7:00 pm from the chapel of the Saskatoon Funeral Home and will be officiated by Pastor Mark Hedlin. Those unable to attend are invited to watch the livestream of the service on Pat’s tribute page at www.saskatoonfuneralhome.com  In lieu of flowers, donations can be made to the Nottawasaga Lighthouse Preservation Society at https://www.nlps.info/.

Share Your Memory of
Marion
Upload Your Memory View All Memories
Be the first to upload a memory!