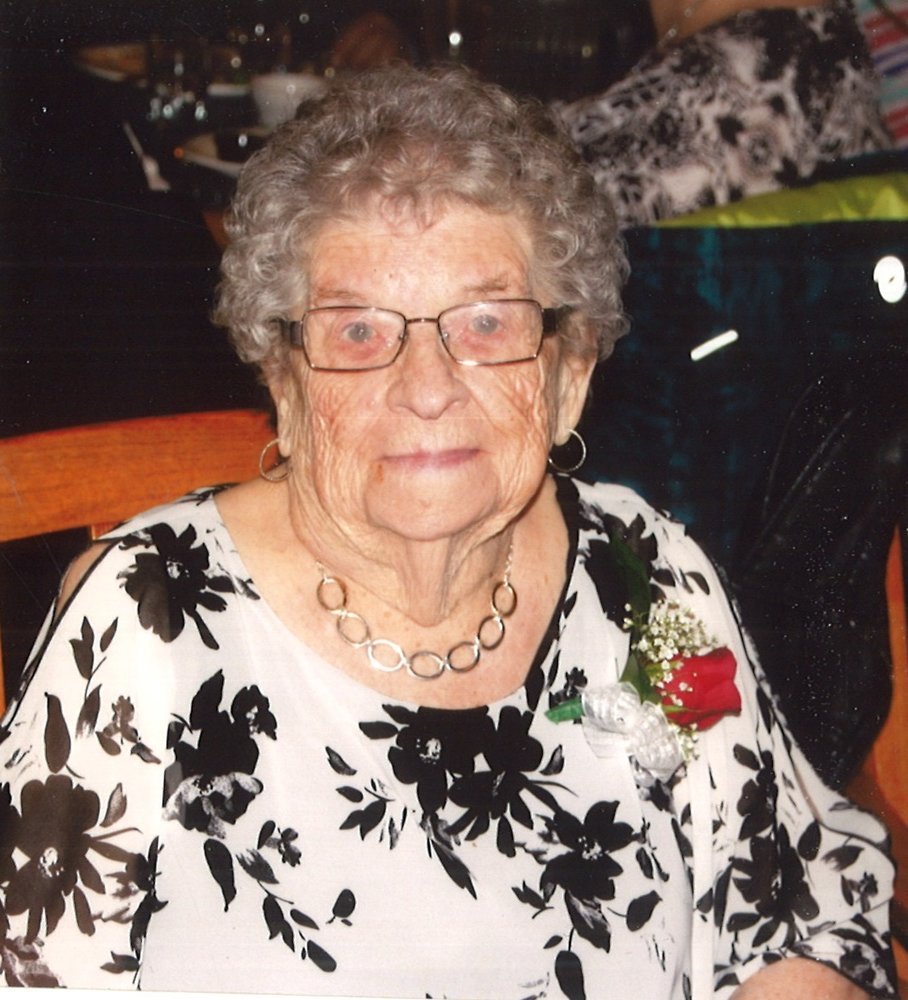 To watch the recording of the Service, please click this link:
https://video.ibm.com/embed/recorded/130742541

It is with great sadness the family of Esther Annie Robinson (Pilgrim) share her passing at the age of 99.  Esther left us peacefully to be with her Lord and Savior July 22, 2021.

Our Mom Esther lived a wonderful full life.  A loving mom, grandma, great grandma, aunt, and friend to all.  Mom was a wonderful influence on our lives and was proud of all her children and their achievements. Esther touched the lives of many and will be truly missed.

Ether was born on the family farm in the Avondale district on April 4, 1922.  She was the middle daughter of five “Pilgrim Girls”.

Esther received her education at Fairholme School and Avondale School.  She took correspondence courses for grade 9,10 and 11.  She attended normal school 1940-1941.  Then taught for 10 years at Frontinac, Pervil, Avondale and Fairholm Schools.  In Esther’s teaching career she especially appreciated working with the student teachers.  That was a responsibility to be a role model to set them on the right path for the future.  After moving to the city Esther used her teaching skills to tutor many students over the years.

Esther married Victor Robinson July 26, 1945 celebrating 43 years of marriage.  They resided on the family farm in Avondale District where Esther and her siblings were born.  While on the farm she was an active member of the Avondale Baptist Church, she taught Sunday School, took part in the Baptist Young People Association and the Ladies Mission Circle, where she displayed her strong faith in God and her love for people

.
December 1st, 1964, Esther and Victor moved to Saskatoon.  She was a member of the First Baptist Church and the Clara Sinclair Mission Group.  She was the secretary, group leader and the President.  Esther received a Western Life Membership Pin and a Dominion Life Membership Pin from the First Baptist Union of Western Canada.  Esther attended Church faithfully.  She had a strong belief and faith in God.  The family would like to thank the loving care and support over the years from Ray and Brenda Milne who meant a lot to Mother.

Esther with the family enjoyed many family gatherings: camping, picnics and playing cards with her sisters and their husbands.

Esther worked faithfully at The Trading Post for 19 years.  Esther did volunteer work at the Heart and Stroke Foundation, she belonged to the Saskatoon Old Timers, Live Smart, Wandering Trailer Club and Widows Club.  After retiring she kept busy gardening, making quilts for her family as well as for the children at the University Hospital and Linus Project Club.

Esther sold her house in Saskatoon in 1999 and moved to the Wycliff Condo where she resided for 9 years.  She then moved to Luther Towers in 2008 until 2019 in which she was involved in many activities and met many new friends.  In January 2020 Esther moved to a Private Care Home until June 12, 2021.  Esther spent her last days in the comforting hands with the team at St. Paul’s Hospital Palliative Care Unit.  Special thank you to the Nurses and Dr. Fenske.

Left to cherish are her children.  Wayne, Ron(Steve), Carol(Dana), Dawna(Joe) and Neil(Delores).  Her Grandchildren; Shawna ( Hassan), Nicole(Kevin), Delaney(Christina), Jordon(Devan) and Kelly(Curtis).  Six Great Grandchildren; Owais, Taylor, Brody, Athena, Brielle, and Mathew.  She is survived by one sister Frances Pilgrim (Don Water) and many nieces and nephews.

Esther is predeceased by her beloved husband Victor in July 1988, her mother and father William and Annie Pilgrim, Daughter in law Lori.  Sisters; Hazel (Harry Cuff), Viola (Al Warren) and Grace (Cliff Winder), who are all waiting for her to join in the next card game.

Celebration of life will be at the First Baptist Church in Saskatoon 401 4th Avenue North on Wed. July 28th, 2021 at 11:00 a.m. Interment will be at Woodlawn Cemetery.

In lieu of flowers, donations may be made to The First Baptist Church or the Palliative Care Ward at St. Paul’s Hospital. To view the service, the livestreaming will begin prior to the service. The link can be accessed here on her obituary page where condolences for the family can also be left.

God looked around his garden
And found an empty place,
He then looked down upon the earth
And saw your tired face.
He put his arms around you
And lifted you to rest.
God’s garden must be beautiful
He always takes the best.
He knew that you were suffering
He knew you were in pain.
He knew that you would never
Get well on earth again.
He saw the road was getting rough
And the hills were hard to climb.
So he closed your weary eyelids
And whispered, ‘Peace be thine’.
It broke our hearts to lose you
But you didn’t go alone,
For part of us went with you
The day God called you home.
-    Anonymous

Share Your Memory of
Esther
Upload Your Memory View All Memories
Be the first to upload a memory!