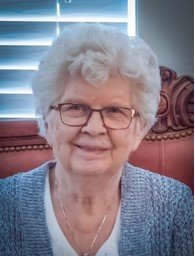 It is with great sadness that the family of Shirley Whiteside announce her peaceful passing at St. Paul’s Hospital just short of her 90th birthday.

Shirley was born in Saskatoon and spent her childhood on the family dairy farm at Grandora.  She attended Hawoods Country School before moving to Saskatoon where she completed high school at the Sion Academy.  While working as a telephone operator in Humboldt, she met the love of her life, Ron and they were married at Asquith United Church on October 5th, 1951.  Douglas and Michael were born while Shirley supported Ron’s career as they moved from Humboldt to Gravelbourg, Watrous, and Rosetown before settling in Estevan in 1959. The family moved in 1967 to Saskatoon where Ron continues to reside at Preston Park II. Shirley bravely navigated the many moves while raising a family in some interesting homes during their first few years.  Shirley returned to the workforce in Estevan then Saskatoon, working at Sears until her retirement.  She briefly reentered the workforce as office manager for Ron’s company, E&R Telecom.

Shirley was a passionate Riders fan and an ardent golf and curling spectator.  She lovingly baked, created handicrafts and cared for her two children and eight grandchildren. One of Shirley’s favorite activities later in life was cradling her five great-grandchildren.