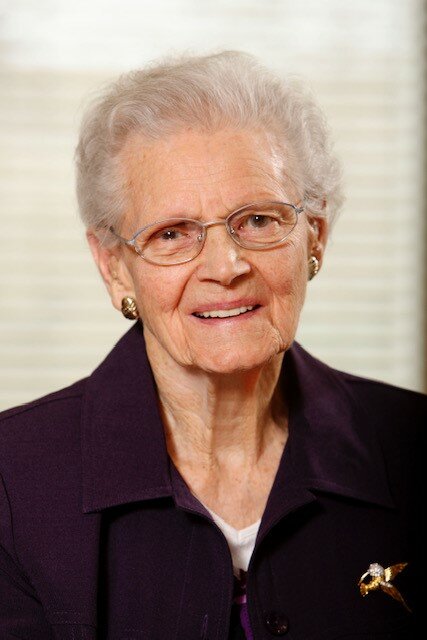 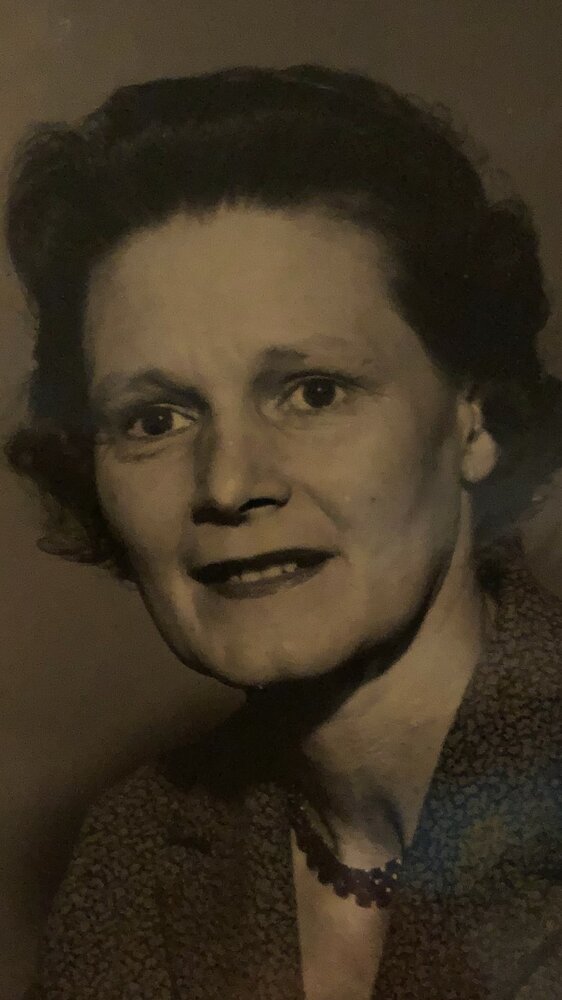 To watch the recording of the Service, please click this link:
https://youtu.be/MVMeuOJRDEo

Mum was raised in a German speaking area around Esk which is just east of Lanigan. During World War II she worked in the general store as postmistress. Some of the locals were very outspoken about their pro-German feelings. It fell to Mum to caution these people about what they were saying during what was then the largest war that the world had known. Some of them heeded her advice and some of those that didn’t were picked up by the RCMP and taken to internment camps for the rest of the war. After the war she moved to Saskatoon and got a job as a clerk at EATON’s (later the Army and Navy and still later the Saskatoon School Board building). In 1949 she met our dad (Dennis Morgan) at an outdoor skating rink. They were married at Esk and started a family. 3 sons and a daughter: Don (Sandy), Lloyd (Melodie), Ken and June (Kevin). During the 1950s Dad was out of town wiring farms during the rural electrification program. Parenting rested with Mum. She spent summers at Pike Lake teaching kids to swim and building tree houses. She didn’t learn to drive until she had three of her four children and it was a challenge. We remember Dad trying to teach her and getting frustrated. Actually it was Mum getting frustrated with Dad. Eventually they hired someone to teach her and she quickly passed. In 1954 they moved to the green and white house at Clarence and Taylor which was great for quick commutes to high school. We were raised in that house and Mum put up with all of us, our friends, our dates and various hidden pets. Dad didn’t allow animals but Mum was able to be wilfully blind for cats and other animals for short periods of time. In the early 70s she took flying lessons and learned to fly our dad’s small plane, just in case she needed to land it in an emergency. In the 1980s grandchildren started arriving. Mum certainly enjoyed the grandkids and found them far less challenging than her own kids. Dad passed away in 1990. She wanted to explore her ancestry and she and a number of her cousins made plans to travel to Volyhnia (which is now part of Ukraine) where her parents and grandparents came from. They flew from Saskatoon to New York to board an overseas flight. No one told them that they were to arrive in LaGuardia but were to leave from JFK. The flight connections were tight so Mum herded all of the cousins to find a taxi van and travel across New York to catch their flight. They made it. They had an interesting trip in Ukraine, but sadly all signs of their family history had been obliterated. Cemetery head stones had been ground up for building material; and church and birth records had been destroyed by fire or military turmoil.

She enjoyed family and friends, especially her Kiwanis friends, her bridge club, her neighbours in Saskatoon, Pike Lake, and Texas, her dear sister Mary, and nieces and nephews. She was a joy to be around. We were blessed to have her for our mum.

Our family extends our deep appreciation to the wonderful and caring staff at Luther Special Care Home, and to Dr Arun Nayar. In lieu of flowers please consider a donation in her memory to Luthercare Foundation, 1212 Osler St. Saskatoon SK S7N 0T9.

The Memorial Service will take place on Monday September 20, 2021 at 1:30 p.m. at Grace-Westminster United Church, 505 10th Street East. Those unable to attend in person are invited to watch the livestream video of the service by clicking the link at the top of this page at the time of the service.

Share Your Memory of
Sarah
Upload Your Memory View All Memories
Be the first to upload a memory!