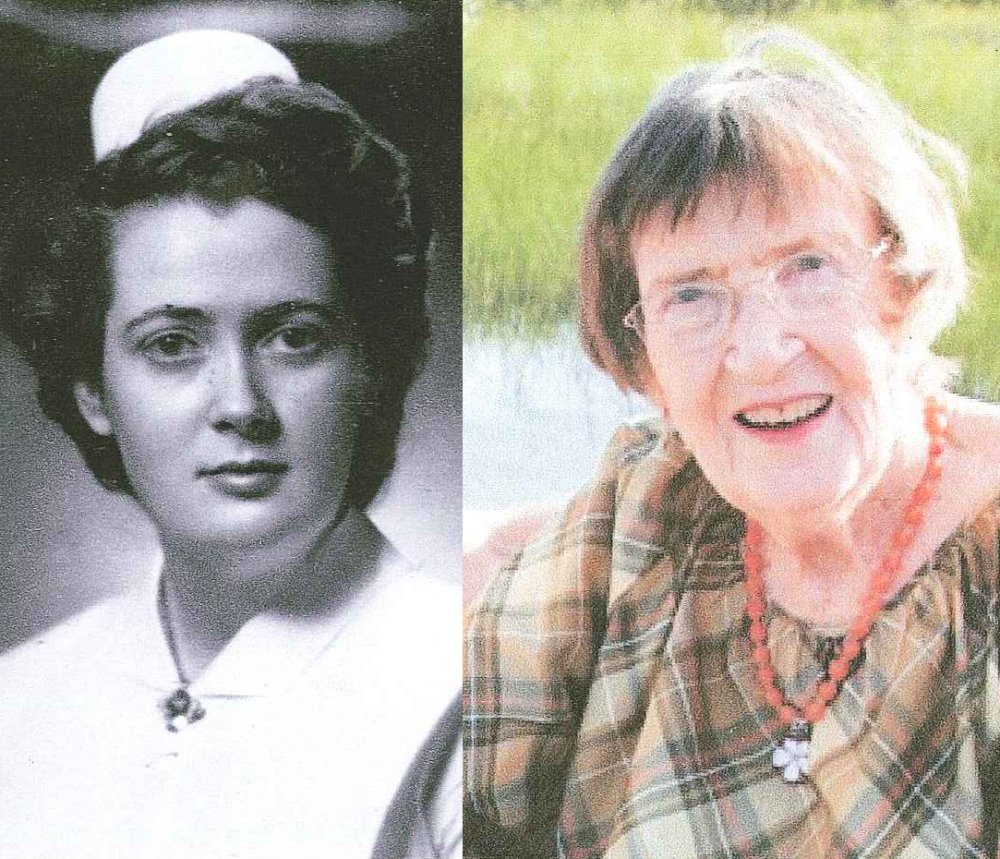 A Memorial Service will be held on Saturday, October 10, 2015 at 11:00 a.m. at St John’s Anglican Cathedral, 816 Spadina Cres East, Saskatoon, SK with inurnment in the Columbarium at St. John’s

Laureena “Pat” Isabel Hodgins (née Wright) It is with deep sadness that the family announces the peaceful passing of our wife, Mom and Grandma on September 12, 2015 at the age of 91 years, after many health challenges. Laureena was born in Tisdale. She grew up on the family farm, attending Newmarket country school and then high school in Tisdale. After graduating from high school at age 16, she took a business course because she was too young for university. She took her nursing training at the Royal Victoria Hospital in Montreal, graduating in 1946 and Public Health course at the University of Toronto. She had the perfect personality for a nurse—intelligent, kind, compassionate and non-judgemental and could remember every little detail about people and their lives. Laureena married James Lamb in 1950; he died two years later. She worked as a public health nurse for nine years and then was appointed the first head nurse on the Rehab Ward at the University Hospital in Saskatoon. She also was on the board and then co-administrator with EdnaMae Gibson, of Cheshire Homes of Saskatoon for several years in the early 1980s. Laureena married Stanley Hodgins on October 11, 1958. They lived in Assiniboia and moved to Saskatoon in 1972. They moved to Vancouver Island from 1993 to 2000, and then returned to Saskatoon to be closer to their family. Mom’s greatest joy was spending time with her children and grandchildren. Laureena was predeceased by her parents, Percy and Alice Wright. She was deeply loved and will be missed by her husband Stan and her four children and their families Sarah (Doug) Woo and their children Chloe, Olivia and Madeline; Kevin (Dot) and their children Oliver and Laureena; Kathleen (Dave) and their children Jonah and Isaac; and Dan (Tara). She is also lovingly remembered by her younger brother and his wife, Jim and Betty Wright and their family; four sisters-in-law Evelyn Orcheson, Gladys MacDonald, Doris Hall and Inez Sorensen; brother-in-law Bud Guenther, and many nieces, nephews and cousins in the Wright and Hodgins families. In lieu of flowers, donations may be made to Cheshire Homes of Saskatoon (2901 Louise Street, Saskatoon, SK. S7J 3L1) or St John’s Cathedral Restoration Fund (816 Spadina Cres East, Saskatoon, SK. S7K 3H4).

Share Your Memory of
Laureena
Upload Your Memory View All Memories
Be the first to upload a memory!