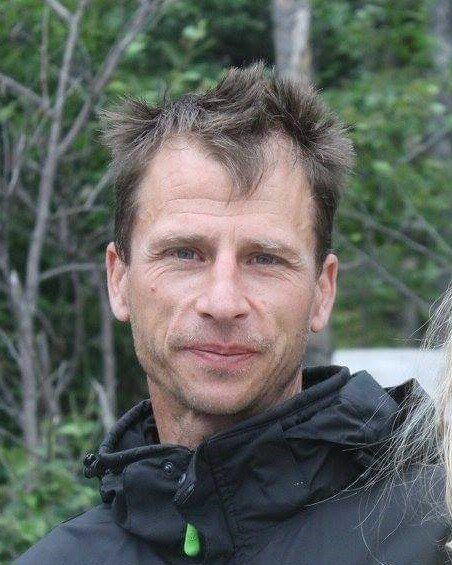 2:00 pm
Army Navy & Air Force Veterans (Anavets)
359 1st Ave North
Saskatoon, Saskatchewan, Canada
* Free parking at the Army Navy and Airforce Veterans Club and directly across 1st Ave * COVID-19 Information: Masks are mandatory! Family preference is that attendees be fully vaccinated or have a rapid antigen test or PCR test if possible Please do not attend if you have tested positive for COVID-19, are waiting for COVID-19 test results, are showing COVID-19 symptoms, Or if you have had close contact with a person who has tested positive for or who has symptoms of COVID-19. The service will be live streamed and recorded.

To watch the recording of the STARS service

To watch the recording of the service at Anavets

It is with a heavy heart that we announce the death of Rorke Michael Dueck- beloved husband and father.  Rorke was born on April 23rd, 1969 in Calgary to parents Leonard and Patricia Dueck joining big sister Tannis Joy.  Rorke grew up in High Level, AB and graduated from Prairie High School in 1988.  As a child Rorke loved hockey, biking, track and field, cross country skiing, water skiing and spending time in the outdoors.  He was always on the go and never wanted to come inside, even after the streetlights came on.  When he was three, he wanted a ‘ockey ‘tick.  His mom told him he had to skate around the entire outdoor rink once to get a stick.  After a few tries he got his ‘ockey ‘tick.  Rorke was always persistent in accomplishing things that were important to him.

After high-school Rorke had many adventures.  He worked at a ski hill, a hotel, in a bank and at a lumber mill.  In 1998 Rorke got his helicopter pilot’s license and began new adventures working all over Canada doing firefighting, drill moves, heli-skiing and whatever other jobs needed doing.  He worked for Aerial-Recon, Campbell, Great Slave Helicopters, High-Terrain and Coldstream. as well as a short stint on the island of St. Eustatius doing medi-vac work.  In November of 2012, Rorke started working for STARS first in Regina and finally moving to Saskatoon where he worked until present day.  Rorke believed strongly in the mission of STARS and spent many hours giving tours to families and classrooms and volunteering at fundraising events.

In 2004, while working for Great Slave Helicopters in Nunavut, Rorke met Alison Jane Fitz-Gerald. It was a love that grew while fishing, hiking, and exploring parts of Canada most people never see.  Rorke and Alison married on December 6, 2006 in Antigua. The wedding week consisted of snorkeling, scuba diving, time with friends and a circumnavigation of the island on a catamaran on his first day as a married man.  Rorke and Alison lived first in Sundre, AB and then moved to Fruitvale, BC where kids Jake Michael (2009), Hanna Elizabeth (2011) and Carly Anne (2013) were born.  During this time Rorke developed a strong love of the mountains and enjoyed countless hours of time in the outdoors with his family.  Late in 2013 they moved to Regina, SK, and 8 months after that moved to Saskatoon.  In 2016 they welcomed their 4th and final child Ryan Campbell (2016).  Rorke was the most amazing father and husband.  If he could help it, he never missed a game, practice, camping trip or any other activities his family had planned.  On his days off he made sure that the kids had a hot breakfast and became famous at home for his egg sandwiches.  His kids were so lucky to have had a Dad that was happy to spend time with them fishing, camping, golfing, walking by the river, skiing, building forts or any other activity they could dream up.  When Covid kept everyone home last winter Rorke moved all the furniture out of the living room and brought the trampoline in the house so the kids would have a fun way to spend their time.

Rorke leaves behind his wife Alison, kids Jake, Hanna, Carly and Ryan, his sister Tannis as well as Bob and Alison Peel (aunt and uncle), Brian and Heather Fitz-Gerald (parents-in-laws), Andrew and Cindy (brother and sister-in-law) and so many cousins, aunts, and uncles.  He also leaves behind longtime friends Ray, Guy, Henry, Beth and many friends from STARS, his time in BC, his neighborhood in Saskatoon and the kids hockey circles.  Rorke is predeceased by his parents Leonard and Patricia Dueck.

In lieu of flowers the family asks that you consider donating in support of the Dueck family via e-transfer to Dueckfamily2021@gmail.com or a memorial donation to STARS Air Ambulance, Nutrien Hangar, 2475 Airport Road, Saskatoon, SK.  S7L 1M4 or online at https://stars.ca/ways-to-donate/sk/

Share Your Memory of
Rorke
Upload Your Memory View All Memories
Be the first to upload a memory!
Share A Memory