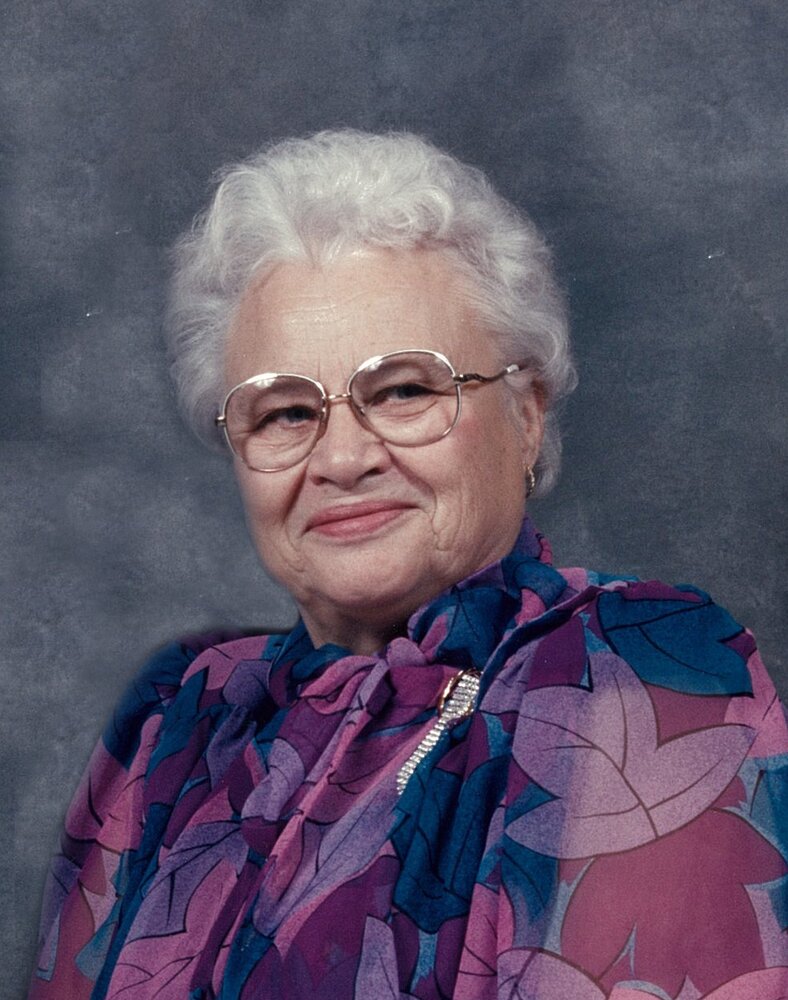 With sadness the family announces that Edith Gertrude passed away peacefully on Oct 2, 2021 at the age of 94 surrounded by her family whom she loved so dearly.

Edith and her twin sister Ruth were born in Loch, Poland on October 28, 1926.  At two years of age, the twins and their parents travelled across the ocean to arrive at Pier 21, Halifax ,Nova Scotia.  Their journey continued across this large country till they arrived at Brightholme, Saskatchewan where they began a new chapter in their life.  Grandpa Heimlich’s vocation changed from being a butcher to a farmer in the dirty thirties with no support was the beginning of resilience in mom’s life.  She attended school in Pine Grove until Grade 8 but when only one of the girls could continue with school, Edith stayed home to take care of her frail mom and work on the farm.  She did work at the TB Sanatorium until a young farmer came pursuing her on a regular basis.  On July 8, 1948 she married Joseph Arnold Ferster and they celebrated their 60th anniversary before his passing in 2008. ,

Mom had a very strong spirit and in 1958, they left the family farm with three small children in tow, Grandma Ristock and  against all advice and no family support, moved nine miles north of Shellbrook to the Rayside district.   Working tirelessly with unlimited determination, they built a farm which is still a part of the family  three generations later.  They continued farming with their sons until they decided to move to the Peter Pond area near Prince Albert.  Dad continued to help with the farm until 1991 when they decided to move to Saskatoon where mom lived until her passing. Left to always cherish her memories are her children: Larry (Debbie) Ferster, Ron (Bev) Ferster, and Brenda (Ted) Ledding. Grandchildren:  Drew (Tanya) Ashton, Kassie, Kallie, Ferster, Deanna (Jeff) Ava and Emmy Ledding, Jay ( Angela), Nolan, Austin and Taylor Ferster, Shea (Kyla) Ellis and Evan Ferster, Quinn Ferster, Jeremy (Katie) Abby, Joey and Maddie Ledding, Teneille (Adrian) Axel Robson, Brooke (Mike) Cooper and Addison Klatt.

Mom was the last remaining member of both sides of this generation and has many nieces and nephews who remember her with fondness. Mom had so many exceptional qualities that had become so diminished over these final years.  Her determined spirit which she passed to her children and her grandchildren will be a legacy that will remain with them throughout their lives.

Her strong faith never faltered even when it was tested over the years and this too will be part of their legacy.

The family expresses a special thank you to the caregivers at St Anne's who provided her with compassionate care during the final years of her life. Donations in Edith's memory may be made to Brightholme Cemetery Fund or Redeemer Lutheran Church. A family Celebration of Edith's life will be held at St. John's Lutheran Church, with Pastor Trent Felstrom and Emmanuel Aristide officiating. Email condolences can be sent to mail@saskatoonfuneralhome.com. Arrangements have been entrusted to Saskatoon Funeral Home

Share Your Memory of
Edith
Upload Your Memory View All Memories
Be the first to upload a memory!
Share A Memory