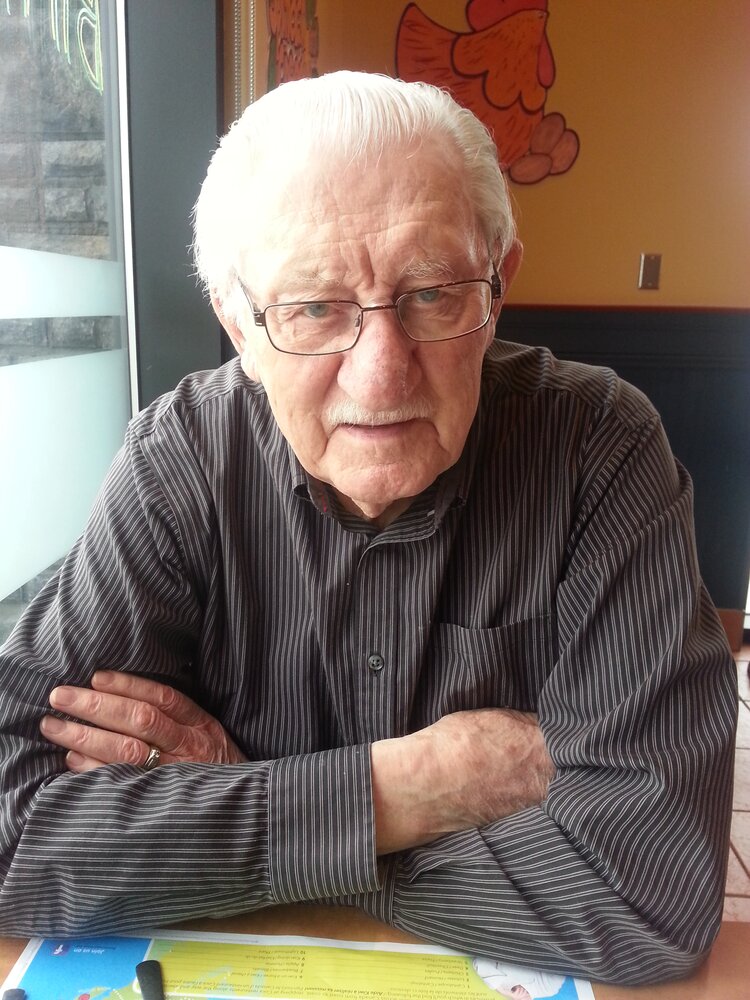 It is with sadness that the family announces the death of Otto Ulrich occurred at Royal University Hospital on Monday, November 29, 2021. He was born on July 30, 1918 at Southey, to parents John and Amolia Ulrich. He was predeceased by his wife Ruth on December 28, 2008 as well as his parents, and his five brothers and their wives; Edward, Frank, Albert, Rudy and Victor and is survived by his daughter Elisa (Colin) Paul, grandchildren Gregory, Christine (John) Villena and great-grandchildren Kayleigh, Kara, Damian Villena as well as numerous nieces and nephews. Otto took his early schooling at Freudenthal Public School and continued on to graduate from Southey High School. He joined the Royal Canadian Air Force in June of 1938 as an Aero Engine Mechanic and was commissioned as a Flying Officer in 1952 and retired as a Squadron Leader in 1967. He served on numerous Canadian Bases from Calgary to Halifax as well as serving in England during WW II for three years and with NATO Forces or three years 1955 – 1958 in Baden-Baden Germany  where daughter Elisa was born. He was especially honoured to receive the Queens Coronation Medal while serving in Toronto in 1952.  After retiring  from the RCAF in 1966 the family returned to Saskatoon. Otto worked for four years at the University of Saskatchewan with the Institute of Space and Atmospheric Studies prior to the Western College of Veterinary in 1970 retiring as Hospital Administrator in 1984. Otto was a charter member of the University Administrative and Supervisory Personnel Association. He was a local member of the Rotary Club of Saskatoon since 1972 and a Multiple Paul Harris Fellow serving a term as Club President and maintaining perfect attendance throughout his active membership. For 15 years he served as an active member of the Saskatoon United Way and was a Charter Director of Junior Achievement in Saskatoon. He did volunteer work at the Royal University Hospital for several years. He took great pride and fulfillment in helping people and one of his favorite pastimes was volunteering  his talents and energy to countless organizations and was nominated for Citizen of the Year in 1978. He enjoyed photography, curling, home carpentry, golfing and playing bridge. Otto enjoyed living in Primrose Chateau Retirement Residence from 1999 to 2020 when he moved to live with Elisa and Colin. Otto’s greatest joy was spending time with his family and grandchildren and great-grandchildren to whom he was affectionately known as “PaPa PaPa” The family extends a special thank you to Dr. J. Hey for all his care for over 25 years. Otto requested that in lieu of flowers friends consider a donation to the Rotary Club of Saskatoon Charitable Fund or a charity of choice.  Following current Covid protocol a private graveside service will be held with Royal Canadian Legion Last Post Rites.  A Memorial Service Celebration will take place at a future date and will be announced in this newspaper.

Share Your Memory of
Otto
Upload Your Memory View All Memories
Be the first to upload a memory!
Share A Memory