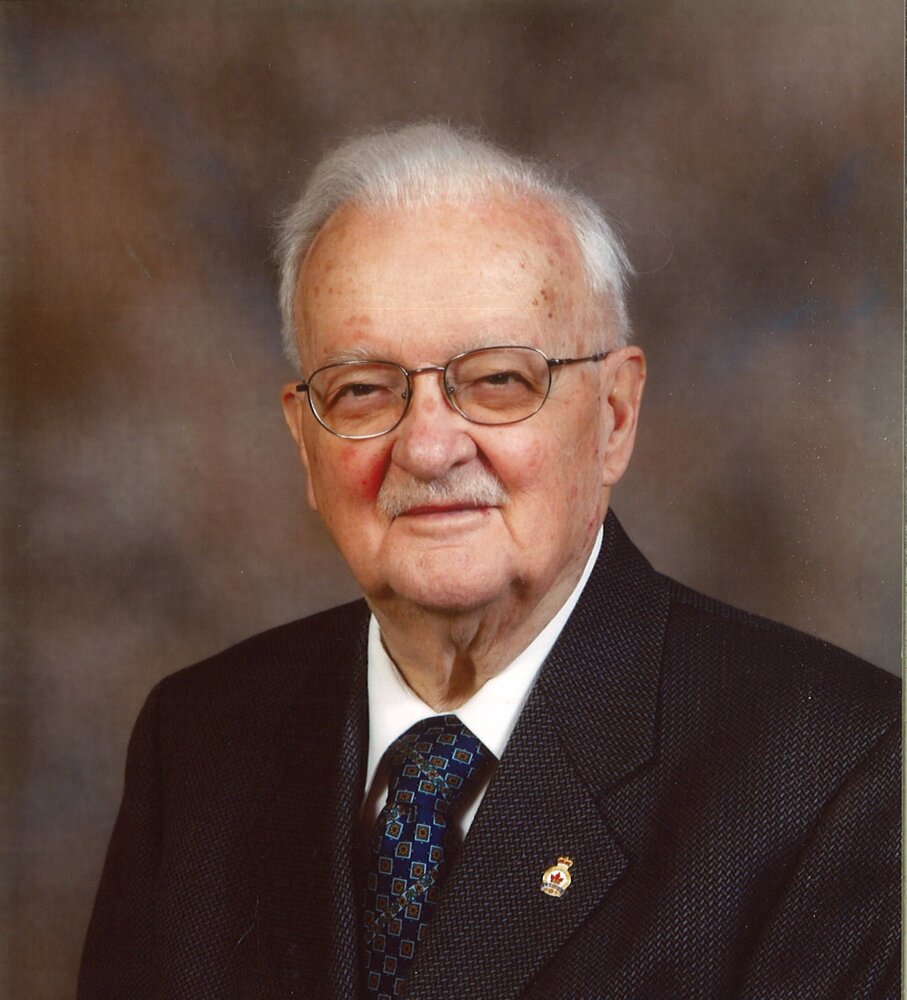 To watch the recording of Frank's service

We are saddened to announce the passing of our father, grandfather, uncle and dear friend, Frank Gow in his 100th year.

Frank was the eldest of four born to Clara and Bill Gow, from England and Scotland originally. Frank was very proud of his Scottish heritage and looked forward to hearing from family there each Christmas. His father served in the 46th Battallion in WW1, then married and became a lineman for CPR. Times were difficult in the 30’s and the family moved around from Winnipeg, Minnedosa, Kenora Ontario and Napinka, a total of 13 moves.

Frank served with the Royal Canadian Air Force in India during WW11 as a Radar technician. He always said he could stand the heat because of his time in India. Many wartime friendships lasted a lifetime and became close family connections in the next generation as well. After settling in Saskatoon, he had a career with the Federal Government making more friendships extending beyond work, developing more family connections.

Frank was devastated after Ida’s tragic passing, but with the strength and support of friends and family, he was able to raise his children in a new future with Jennie. Frank and Jennie helped host highly anticipated Block Parties on their street and built more family friendships there that continue today. They enjoyed numerous trips, always visiting and sharing with family and friends.

For over 70 years Frank’s piece of heaven was Hawk Lake. He enjoyed celebrating generations of family gatherings as well as hosting friends from near and far. Fishing was one of his greatest pleasures and his fishing trips with his brother in laws are legendary. He was in the lake at 97 years, something we will all remember when we think it is too cold to get in. Fortunately, his birthday was at a time of year that many could celebrate with him at the lake. He especially enjoyed happy hours laughing and telling stories.

Days before his passing, he attended a gathering celebrating his 75 years of membership as a Mason in A.F.& A.M. Victory Lodge # 144.  He was proud of his achievements with his Masonic brotherhood and treasured his friendships there.

Frank had a terrific ability to memorize Masonic work and to remember stories of his life. He could recite poetry he learned in high school as well as sing Gaelic songs he learned from his father. He was our encyclopedic family history resource.

Frank was active in his 40 years of retirement and commented that he was retired longer than he had worked. He made many friends curling and cross-country skiing. He spent many years volunteering with St Martin’s United Church. From teaching Sunday School, to contributing at Friendship Inn and Ministry by Phone and more, he valued his connections with a wide variety of people. In later years he looked forward to also helping with the Yard Sale and Church Suppers. He was delighted to talk to strangers while selling poppies with his good friends Jack and Carol, and was looking forward to celebrating 75 years of Legion membership in 2022.

Frank’s volunteer work was never work, but was a regular part of his day, to check on friends and acquaintances, help someone navigate red tape, drive someone to appointments, and countless other acts of kindness. He wasn’t much of a cook, but he could help peel potatoes or serve food to the needy. Generous with his time and energy, he would support any worthy cause that requested, it seemed, and checking his mail was important to him to the very end.

Frank was always referred to as a good man, liked by all and loved by many. He will be greatly missed by all, but none more than his own family. We will miss his presence, but his spirit lives within each of us and we hope we can all live a long and good life, as he did.

The family wishes to thank the staff at Sherbrooke Community Center who lovingly cared for our father Frank. In lieu of flowers, donations to a charity of your choice are welcome.

The Funeral Service will take place on Saturday, May 14, 2022 at 1:00 pm at Saskatoon Funeral Home (4th Ave. & 25th St.) followed by a reception at the Edwards Family Centre. Royal Canadian Legion Last Post and A.F.&A.M. Masonic Rites will be included. The Service will be live streamed and can be accessed at www.saskatoonfuneralhome.com where condolences and stories may also be shared with the family. Arrangements have been entrusted to Saskatoon Funeral Home.

Share Your Memory of
Frank
Upload Your Memory View All Memories
Be the first to upload a memory!
Share A Memory