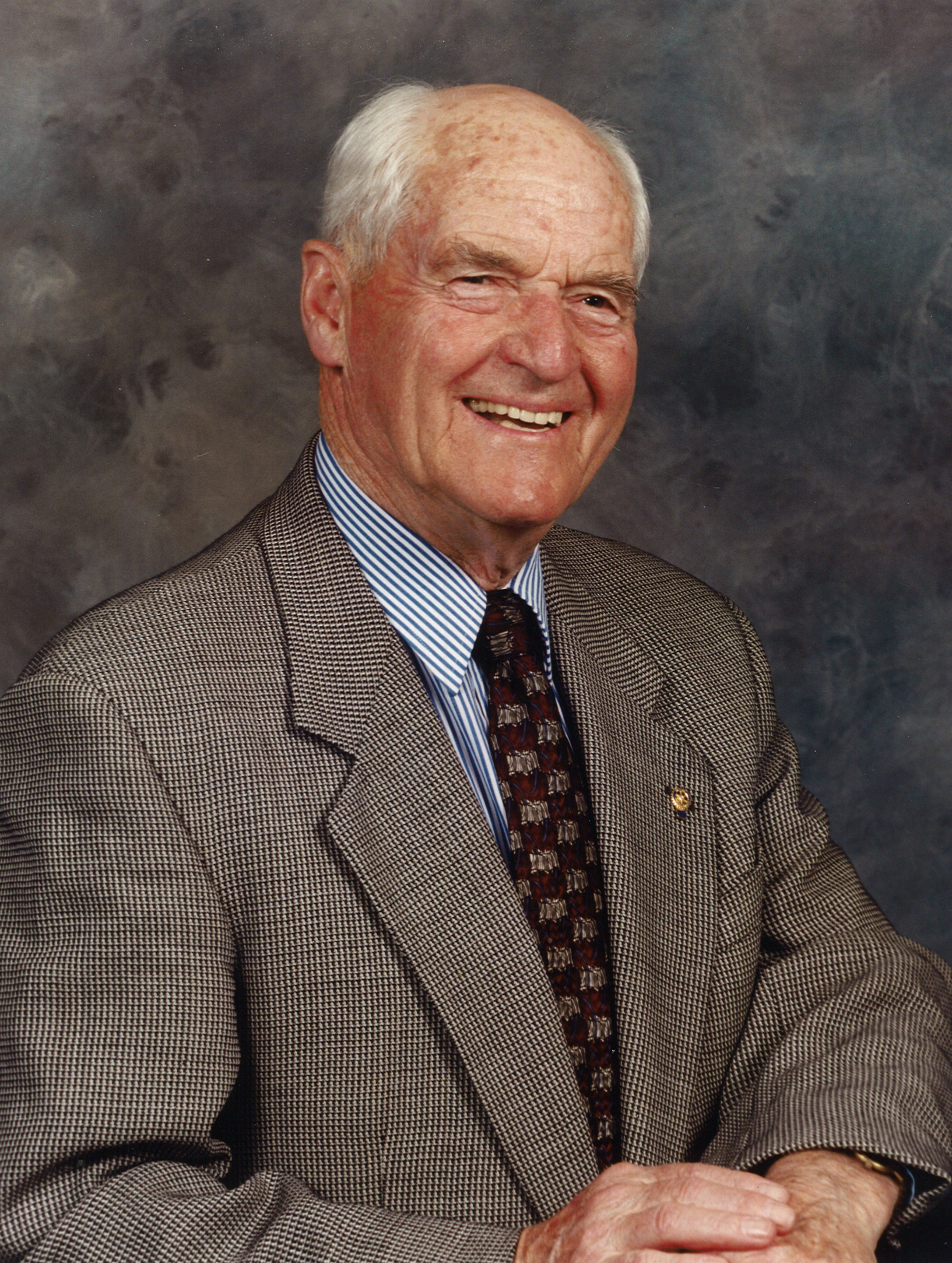 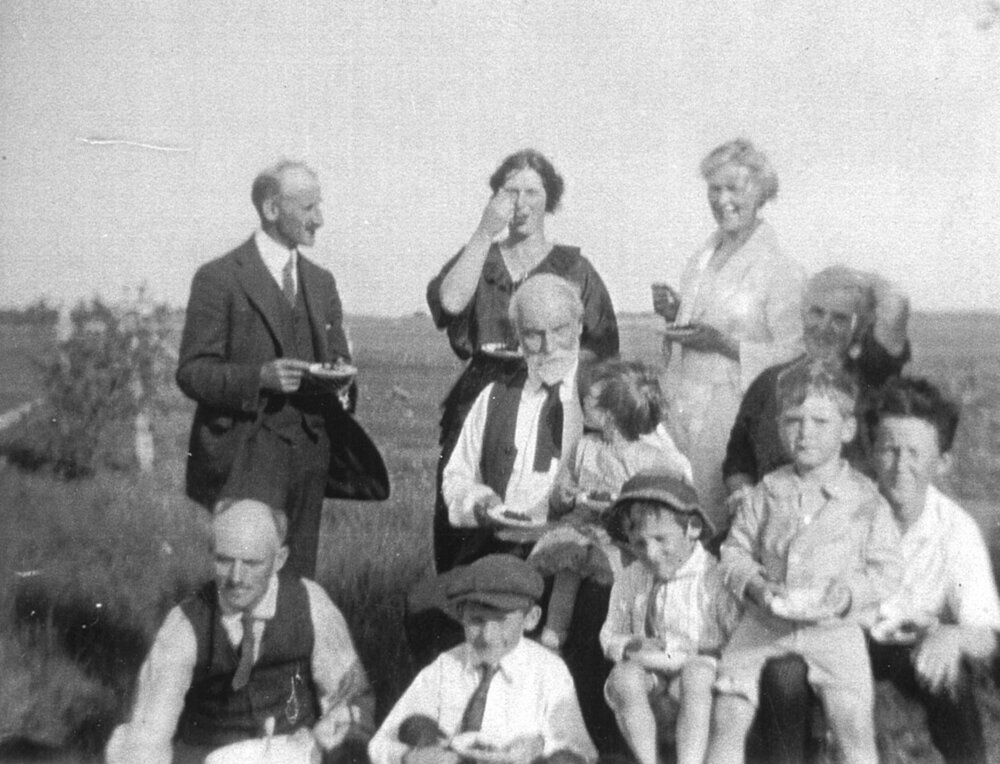 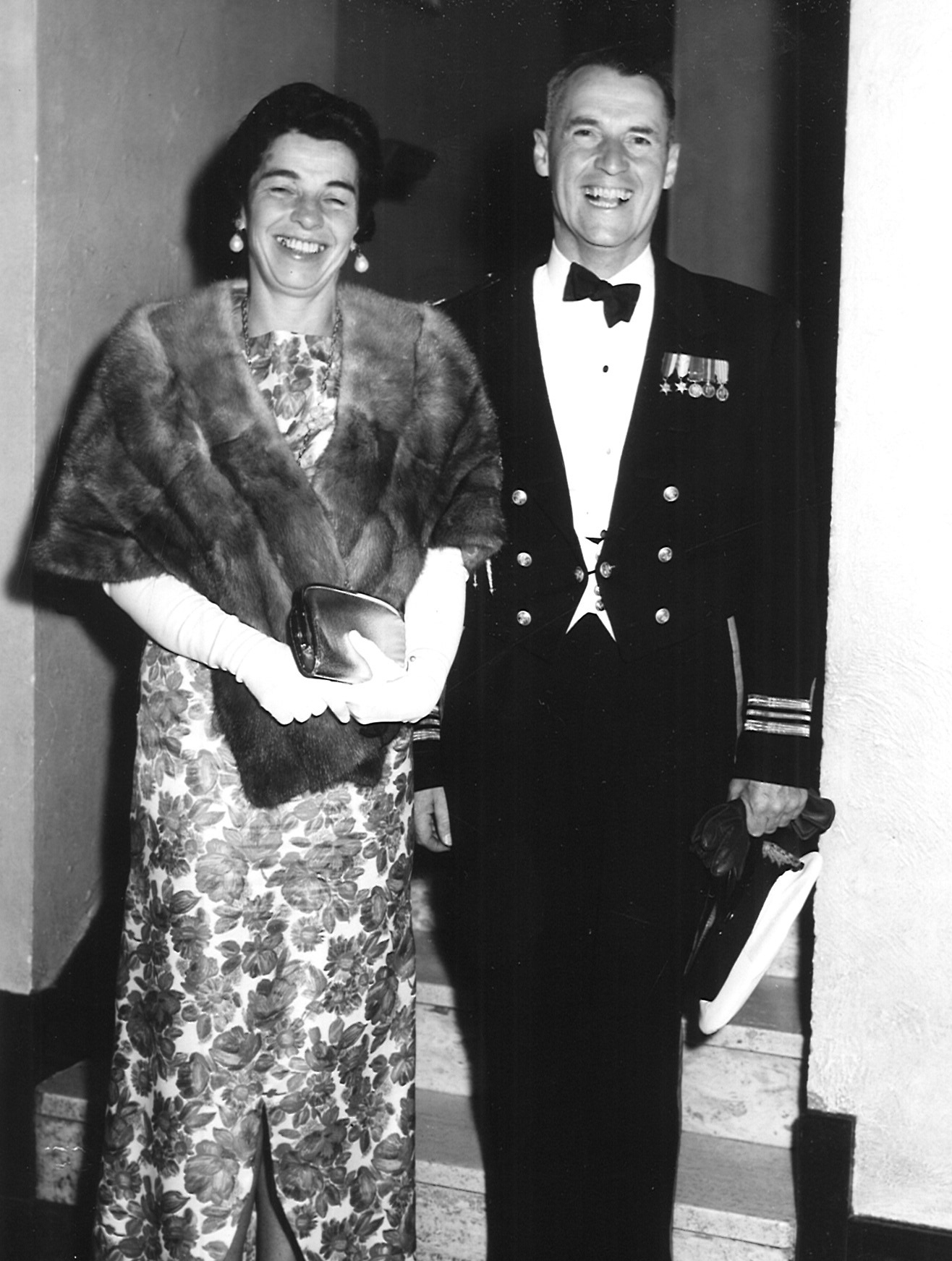 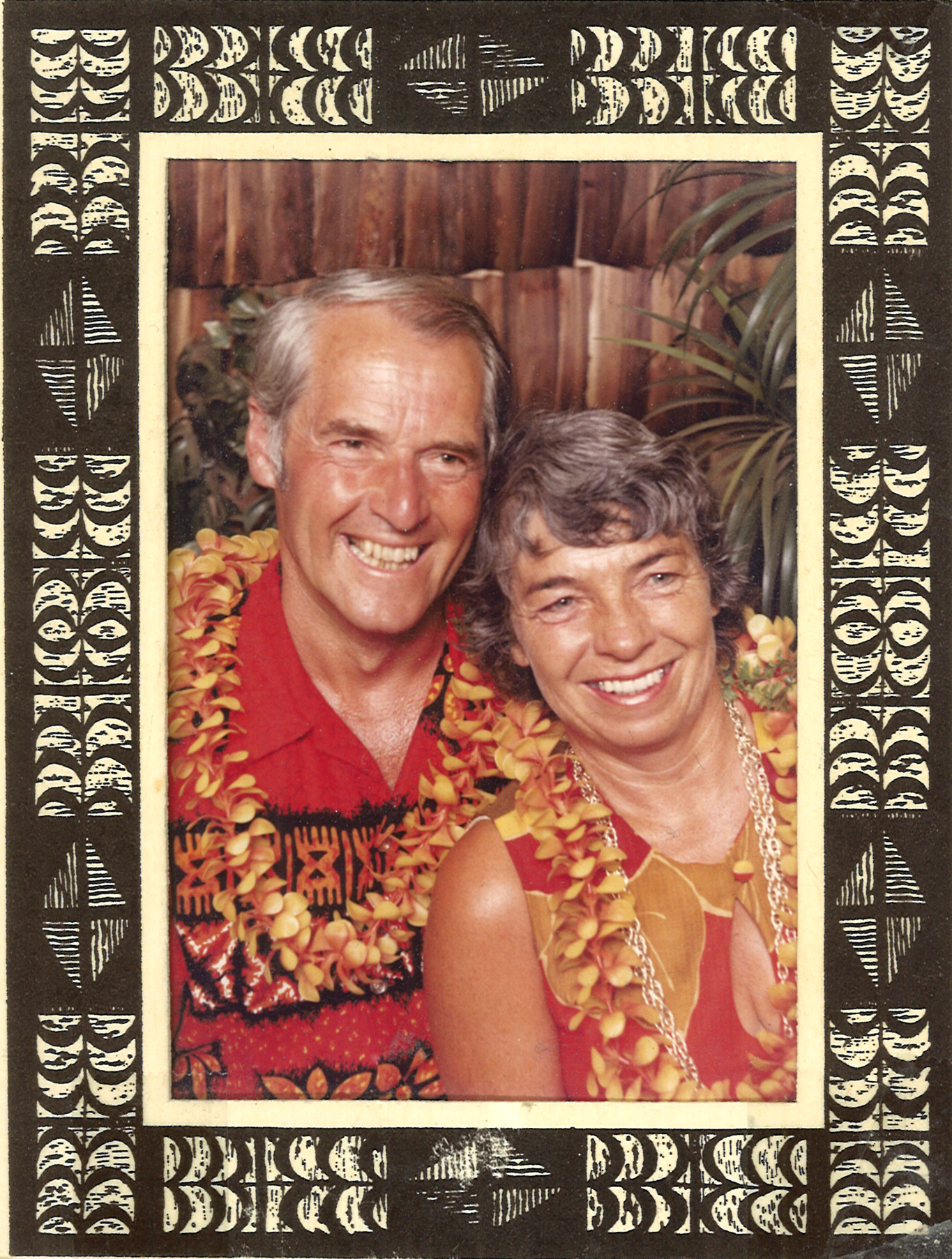 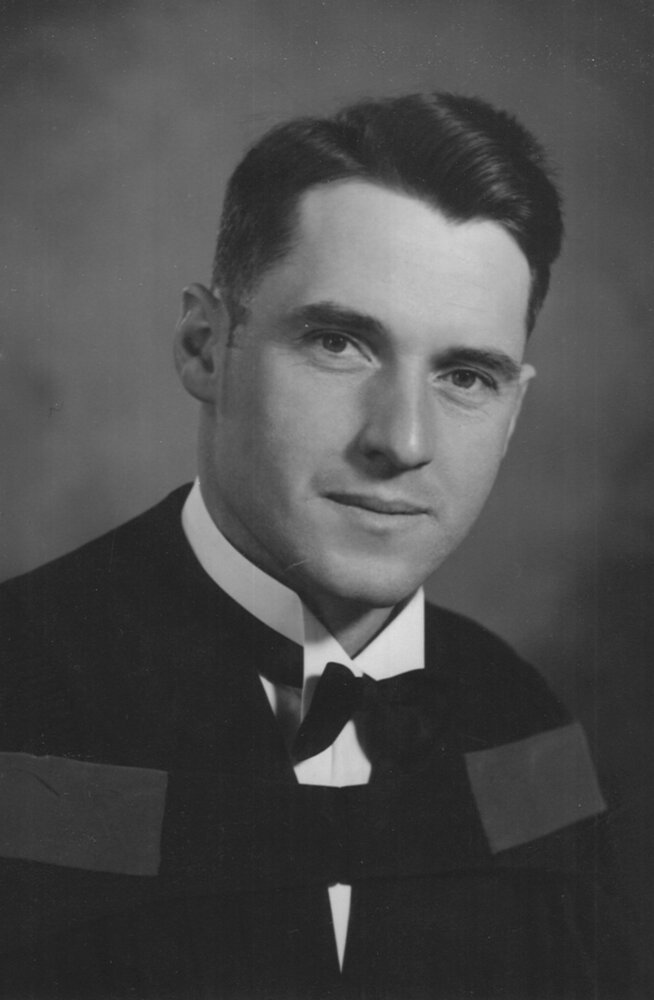 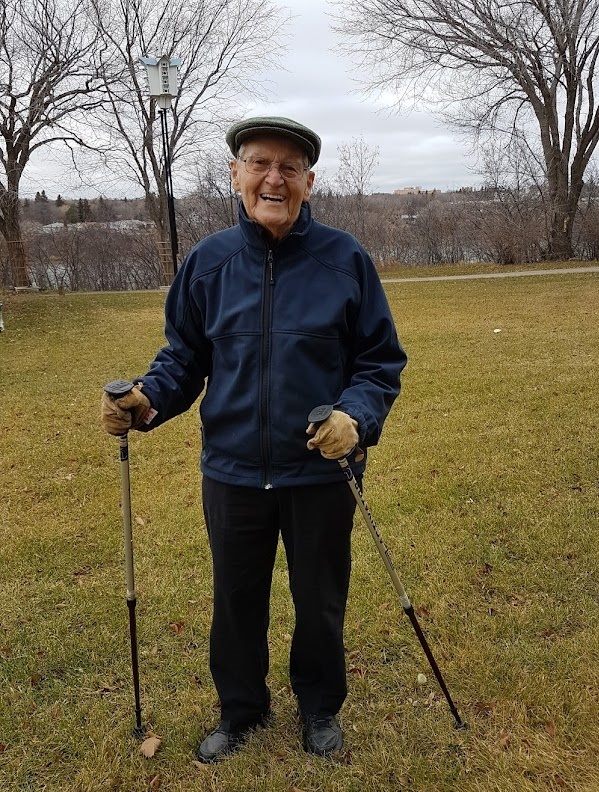 Born in Saskatoon at the home of Mrs. Chisholm, Herb grew up on the farm in Lilac. His sister arrived 18 months after him. At once, Nora embarked upon a century long mission to improve Herb's sense of humour! His brother, Dave (deceased) and sister, Liz, joined the crew. Adjoined by homesteads belonging to extended family and friends, the Dow farm, by the railway tracks, was the setting for much hardship and happiness. Grandfather William imbued Herb with devotion to family and utmost respect for all of humanity. Parents, Marjorie and Jack, created a home rich with stories, music, and laughter. As a farm boy, Herb acquired a relentless work ethic and the ability to keenly observe the elements in order to nurture plants and livestock.

Herb's formal education started in the one room school at Lilac for grades 1 through 10. He joined 35 pupils in Ruddell to complete Grade 11. Moving with his family to Saskatoon in 1938, Herb did Grade XII at City Park Collegiate. Dad worked his way through first year Agriculture at the U of S. He earned thirty cents an hour, doing 10 hour shifts, six days per week.

In July of 1940, Herb enlisted in the Royal Canadian Navy. Trained in Halifax, he was posted to the HMCS Kenogami. A mere three weeks after going to sea, the Kenogami engaged in the Battle of the Atlantic. For the rest of the war, Herb was stationed on the gulf of St. Lawrence and the east coast, as a sub lieutenant. His vessels were small torpedo boat type ships. He achieved his own command just before VE day.

Home again in Saskatoon, Herb worked for the Veterans Land Act and returned to his studies in agriculture. 1950 saw Dad graduate with his BSc from U of S. This same year, he married his wartime sweetheart from Nova Scotia, Frances.

Fran and Herb made Regina their home for 43 years. Leaving the Rain and Hail Insurance Company, Herb became an investment dealer with Houston and Willoughby. Twenty-five years later, he retired as a senior vice-president.

Herb was honorary Naval aide de camp to five lieutenant governors. He and Fran enjoyed the resulting proximity to provincial and national leaders of the day.

Herb gave his time generously to the causes he believed in. With the Royal Canadian Legion he was president of the Regina Branch, provincial treasurer and provincial chairman. For U of S Alumni, Herb served on the Alumni Council as a member, as president, and subsequently as Alumni Representative to the University Senate.

Herb's appointment to the Saskatchewan Securities Commission from 1983 to 1997 provided him with a productive way to ease into retirement.

Saskatoon became Fran and Herb's home city again in 1992. At Oasis Manor and Luther Riverside Terrace, Herb and Fran welcomed friends and family. The move to LRT in 2007 was an opportunity to reconnect with old acquaintances and forge new friendships. The LRT blend of companionship and caring helped Herb to survive and eventually thrive after the loss of Fran in 2014.

Incredibly, Herb always found time for his children: Bev (Smithers, BC), Bill (Vancouver), and Doug and his partner Louise (North Vancouver). Dad informed and inspired us every step of the way. He is enshrined in the hearts of his grandkids: Nellie (Smithers), Amus and partner Sabrina (Port Coquitlam), Malcolm and partner Melissa (Vancouver), Stuart and his wife Zoe (Hamilton, Ontario), Theo and partner Tianna (Saskatoon). Theo was his grandpa's steadfast wingman; sharing festivities, practicalities and predicaments in the final decade of Herb's life.

Visits with his siblings, his cousins, nephews, and nieces, by phone and in person always warmed Dad's heart and brightened his day. The family extends their gratitude to all of the wonderful people who have accompanied Herb on his life's journey. Special tributes: to Dr. McKee for her insightful care and to the entire staff working in Emergency at St. Paul's Hospital for their skill and compassion on December 24.

We will hold a celebration of this life, well lived, once it is safe for us to gather together again.

Kindly consider making a donation in Herb's memory to the charity of your choice.

To contact the family with personal condolences, please email: HJDowmemorial@gmail.com

Share Your Memory of
Herbert
Upload Your Memory View All Memories
Be the first to upload a memory!
Share A Memory