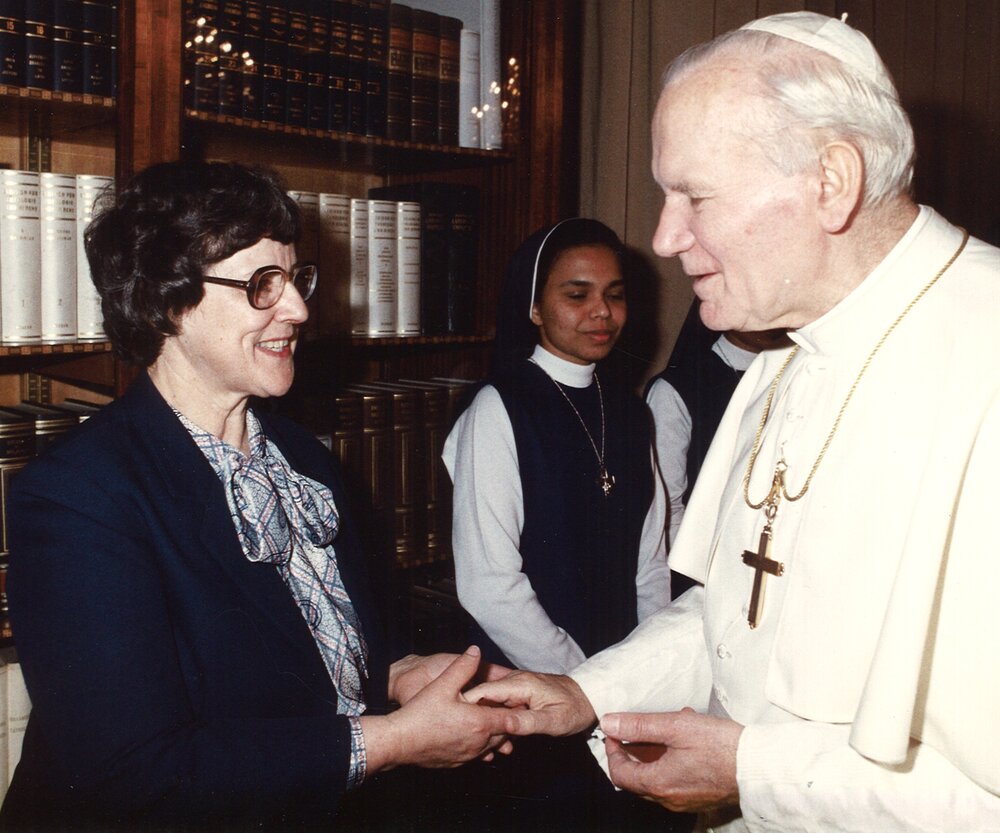 To watch the recording of the Service, please click this link:
https://video.ibm.com/embed/recorded/131299699

Sr. Catherine was born in Mazenod, Sk. on November 26, 1926. She attended school in Gravelbourg where she was taught by the Sisters of the Holy Names of Jesus and Mary. After grades 11 and 12 with  the Sisters of Sion in Moose Jaw she entered religious life with them in Prince Albert in 1944. After profession in 1947 she took teacher training in Saskatoon where she taught for two years in Sion Academy. After teaching the three following years at St. Agnes School in Moose Jaw, she became one of the four founders of St. Bernadette Convent in Dearborn, Michigan where she taught for ten years and was school organist. She transferred to Kansas City in 1960 where she taught at Notre Dame de Sion Elementary School for thirty years, seven of which were as librarian and three as principal. After retirement in 1990 she spent a year at the Generalate in Rome, five years in Toronto working with refugees and in 1996 retired to Acadia Drive, Saskatoon, where she ministered to the elderly Sisters and volunteered at the Gathering Place. When the convent on Acadia Drive closed in 2005 she moved to St. Anne’s Residence from where she volunteered at Queen’s House of Retreats once a week for several years. Catherine then moved to Trinity Manor where she lived the remaining years of her life.

During her busy life of teaching she managed to earn two Education Degrees and because of her life-long interest in archives she gathered information for both the Sion Archives and for her family. In her retirement she completed writing five books on the latter and put the archives of the lives and works of the Sisters of Sion in Canada/US in order. She translated the House of Journals from French to English for the many houses in Canada/US and transferred much in the archives to the computer for use of the Congregation.

The Sisters of Sion want to express their gratitude to the staff at Trinity Manor, to the nurses, and Dr. Skeldon at Royal University Hospital, to Kathy Daniels and the staff of OverCHealth, to Ashley Bassendowski of CPAS, to Fr. David Tumback and St. Patrick’s Parish and to Saskatoon Funeral Home.

A private funeral liturgy will take place at St. Patrick’s Parish with Fr. David Tumback presiding. Interment will follow at Woodlawn Cemetery in the Sisters of Sion section. For those wishing to watch the service livestreamed, the link will be live on this obituary page at 1:30 pm on Tuesday, January 25, 2022.

Share Your Memory of
Sister Catherine
Upload Your Memory View All Memories
Be the first to upload a memory!
Share A Memory