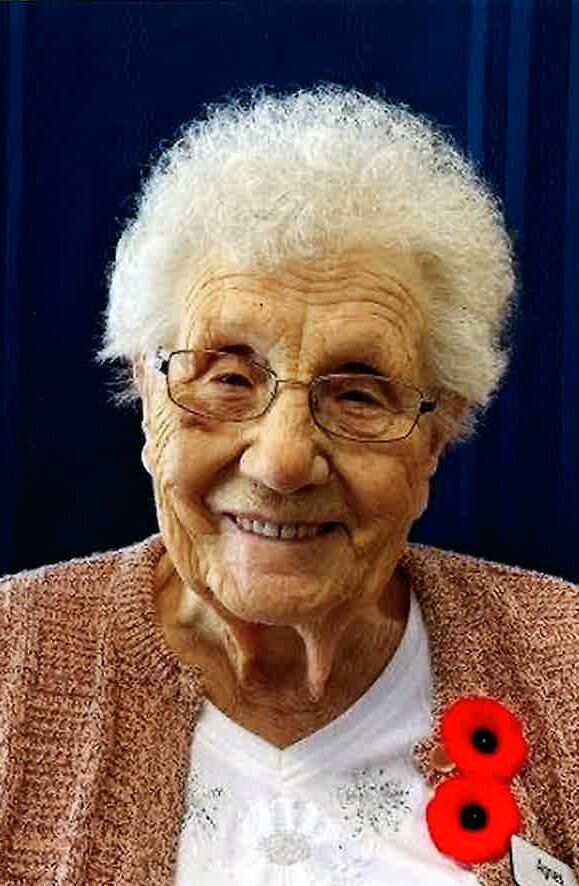 The family of Agnes Hilgers are saddened to announce her passing on Jan. 26 at her home at St. Angela Merici in Saskatoon at the age of 94.  She was born in Humboldt, Sk. on May 30, 1927 to Paul and Clara {Ecker} Thiemann, the middle of eleven children.  She received her schooling at St. Augustine’s school leaving after grade eight to help at home caring for younger siblings as well as her mother who suffered from MS.
She married her best friend and the love of her life, Herb Hilgers, on July 5, 1949.  Family was everything to them.  Together they raised two sons and two daughters.  Ron [Joan} and Ron’s children Tracy Dietrich and family Cody, Jessie {son Lyric and daughter Karma], Colton, Aidyn and Talyn; Warren; Rhonda {Justin} Busse and their family Chase, Baillie and Kira; Ryan {Rhea} and their daughters Cali and Jade as well as Joan’s sons Bruce and Billie and their families:  Lynn {Mike} Kohle and their children Levi {Cathy} and their family Emmerson and Lucas; and Megan {Mitch} Lester and their family Cohen, Liam and Sophie:  Terri {Garth} Farough and their children Shannon {Mark} Barry and their daughters Madison, Makenna and Ella; and Craig {Janelle} Farough and their family Claire, William and Ivy: and Jerry {Linda} and his daughter Jennifer {Eric} Dyck and their daughters Ava and Julia; as well as Linda’s   children Laura, Tanya and Justin and their families.

Herb’s career with the Wheat Pool took them to Lake Lenore and Totzke for short periods and then to Bruno where they raised their family for the next twenty years.  Agnes was very involved with the CWL and the PTA while they were there.  Herb’s Credit Union career took them to Spy Hill, Sk. in 1970, Herbert, Sk. in 1973 and Hafford, Sk. in 1984.  Agnes taught catechism while they were in Spy Hill and in Hafford.  They retired to Saskatoon in 1987 where they enjoyed many busy years with gardening, bowling, dancing, card parties and traveling.  They were usually in the company of family or friends either in Saskatoon or their cabin at Wakaw.

The family would like to express sincere thanks to Ann Miller and the thoughtful, conscientious staff at St Angela’s for the amazing care they gave Agnes, as well as the consideration they gave her family.  Memorial donations can be made to the Heart and Stroke Foundation.  Prayers and funeral mass will be held at a later date as per Agnes’ request and will be announced prior.

Share Your Memory of
Agnes
Upload Your Memory View All Memories
Be the first to upload a memory!
Share A Memory