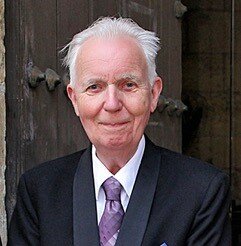 To Watch the Livestream of the Service, please click the link below.

Dr. Leslie Smith passed away, in Saskatoon, at the Palliative Care Unit of St Paul’s Hospital on February 12, 2022, at the age of ninety-one. Born in Ryeford, near Stroud, Gloucestershire, England on January 24th, 1931, to Walter George Smith and Gladys Edith Smith (née Fowles).

He attended St. Matthews Primary School and early on showed an aptitude for learning and was intellectually curious.  Later, he was accepted into the local Grammar School (Marling Boys School) at the age of eleven. Upon graduation, he attended the University of Birmingham from which he graduated in 1956 with medical and surgical degrees.

November 9, 1956, he married Brenda Margaret Smith (née Clough) and moved to Muenster, in Germany, as part of his National Service obligations; serving as a Captain in the Royal Army Medical Corp. His military service was an important part of his life and he developed a love of Germany, which stayed with him throughout his life. His first son Paul was born in 1959 in Germany.

In 1962, at the height of the medicare crisis in Saskatchewan, they emigrated to Prince Albert, Canada where Leslie held a position at the Prince Albert Community Clinic and was one of the first physicians to directly bill the government for patient care. In 1963 their daughter Juliet was born. The family then moved to Calgary where Leslie was in private practice. It was here that Adrian (1965) and Michael (1966) were born.

In 1969 the family returned to Germany via the UK, where Leslie supported the Army of the Rhine as a physician followed by a short stint in the UK, as the physician at a Military School.

In 1976, the family returned to Canada. A twenty-five-year career as a General Practitioner providing community care in Esterhazy followed, before Leslie and his wife moved to Saskatoon in 2000 to enjoy their retirement.

Leslie was an academic profoundly interested in everything from the arts to the sciences and with a fondness for history. An adventurer, with a dry sense of humour and a quick wit, who loved to see what was over the horizon. An admirer of classical music with a special interest in the works of Richard Wagner and the mythology of his operas. A profoundly complex man with a keen intellect and a deep sense of decency.

An avid photographer, he was also happy at home listening to music, reading newspapers, and embracing the newer internet technologies.  He maintained an strong interest in news from the community surrounding his home, the Stroud Valleys which is part of the Cotswolds, an area that he never ceased to love and which he visited often.

In later years, while was less mobile, he maintained his connection to his family and the broader world using his iPad. He followed the news, found those movies from his younger years and always had a British comedy sketch at his fingertips to show a visitor.

He will be deeply missed.

Leslie was predeceased by his wife Brenda (Margaret) Smith née Clough; his parents, Walter and Gladys Smith (Fowles), and his sister Doreen Smith.

Funeral Service will be held on Monday Feb 21, 2022 at 11:00 a.m. at Grace Westminster united church. The service will also be livestreamed for those unable to attend. The link will be at the top of this triubute page.

Share Your Memory of
Leslie
Upload Your Memory View All Memories
Be the first to upload a memory!
Share A Memory