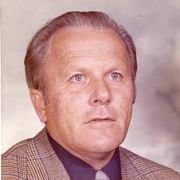 Funeral Services will be held in Saskatoon at St. Joseph's Roman Catholic Church on July 13 at 1:00 p.m. Viewing will be at the Church one hour prior to the funeral.

Frank George Holizki was born in Bayard, Saskatchewan on March 22, 1925 and passed away in Victoria, BC on July 3, 2015. Frank was predeceased by his wife, Mary, his parents Zachary and Mary Holizki, his brother Joe and sisters Rose, Eva and Madeleine, his daughter-in-law, Trudy and by his friend, Mercedes (Merce) Abrahamson. Frank is survived by his children, Terri (June), Garnet and Lois and by his grandchildren Alexis, Spencer and Cameron and by his great- grandchildren Robin and Felix, his brothers George and Zachary and his sister Carol and many nieces and nephews. As well as Merce's daughter Pam (Allen), her children Jared (Emily) and Natasha, and granddaughter Poppy. Frank attended Normal School in Moose Jaw after graduating from high school. He started his teaching career while attending Normal School. Frank earned his Bachelor of Education from the University of Saskatchewan. He taught and was principal in many locations in Saskatchewan including Lake Alma, Aberdeen, Ceylon and Hanley. In addition to teaching high school, Frank coached high school sports  basketball, football and softball and he loved directing school plays. His love of sports continued throughout his life and he shared his passion with his family. When he retired, Frank golfed daily in the summer and curled in the winter. Frank had many friends at the Wildwood Golf Course and Nutana Curling Rink and he was a regular volunteer at both clubs. Frank moved to Victoria, BC early in 2014. He enjoyed his flowers and the greenery outside his home. Being able to spend more time with his daughters and grandchildren was very important to him. His morning breakfasts with Cam and weekend drives to explore Victoria and the surrounding golf courses made him happy. Funeral Services will be held in Saskatoon at St. Joseph's Roman Catholic Church on July 13 at 1:00 p.m. Viewing will be at the Church one hour prior to the funeral. In lieu of flowers, please make donations to the Heart and Stroke Foundation.

Share Your Memory of
Frank
Upload Your Memory View All Memories
Be the first to upload a memory!