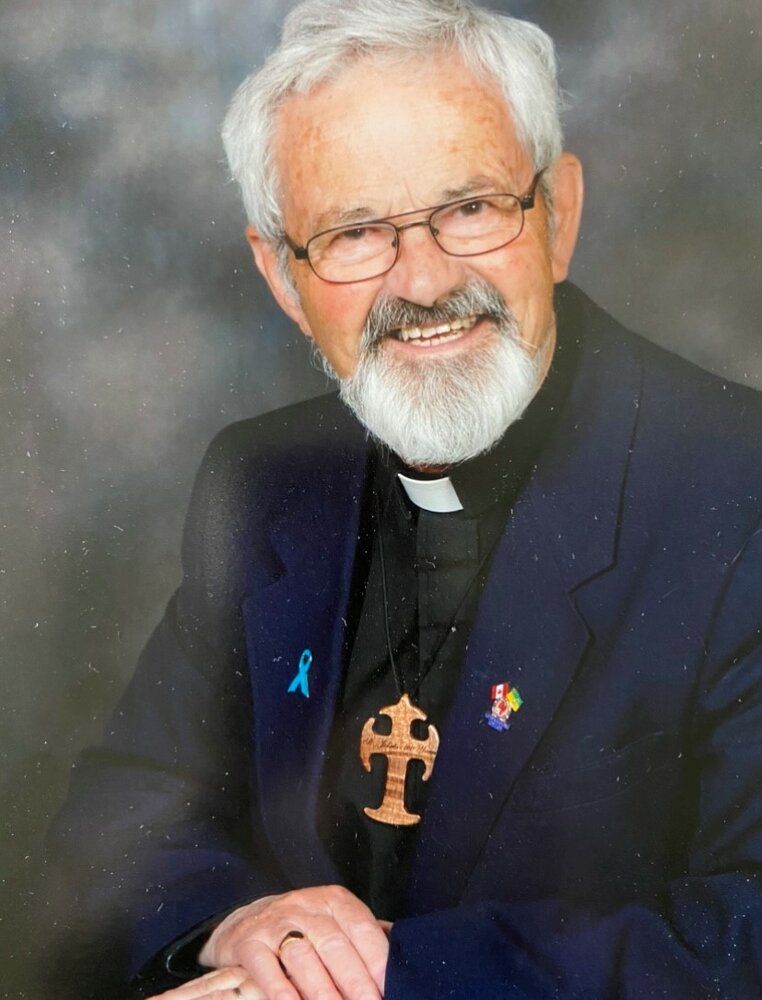 To Watch the video of Colin's Service click the following link,

"Nothing is lost that Love remembers."

Dad to us, Colin Clay will be remembered as a Husband, Grandad, Great-Grandad, Uncle and Brother to his family across Canada and around the world, a world that was filled with love, compassion, and service.

After a beautiful 90th birthday party at his home at Stonebridge Crossing in Saskatoon, surrounded by his family, Dad ended his Earthly journey and embarked on a new, exciting adventure. With family by his side, the "ambassador of Saskatchewan" as we called him, died on Wednesday, July 6 where he always said the sun shines.

The Clay family is so humbled by the tributes we have received about Dad's impact on their lives and can best summarize them in the words of his English nephew, Michael Horton: “A British soldier, a Cambridge graduate, a Reverend Canon, an NDP parliamentary candidate, a university chaplain, a peace advocate, a gay-rights campaigner, a proud Canadian... the living embodiment of true ecumenism”.

British by birth, Colin and Barbara Clay emigrated to Canada in 1959 with children Philip and Gill. He served pastorally and then academically in Sudbury, Ontario, where Elizabeth (deceased), Alan and Sue were born, before moving to Saskatoon in 1977 to be one of the ecumenical chaplains at the University of Saskatchewan, retiring in 2000. He continued in the ministry and was committed to inter-faith dialogue. Colin served as a padre in various veterans’ clubs and was a strong advocate for world peace. He was also the author of several books.

Predeceased by his wives Patricia and Gail, and daughter Elizabeth, Colin is survived by his ex-wife Barbara, the mother of their four adult children: Philip (Cindy); Gill (Michael); Alan (Sandra); and Sue (Mike); as well as his sister Audrey in England, nephews Andrew (Lynne) and David (Marzena); eight grandchildren: Michelle (Greg); Mark (Candace); Alison (Andrew); Katie (Trell); David (Monika); Alex; Jacob (Laura); Scott (Stephanie); and four great-grandchildren: Bentley; Colin; Landon and Owen. There are too many friends and colleagues to list here, but you know who you are and how special you were in the life, work, and communities of Rev. Canon Dr. Colin Clay.

Dad has left us all with wonderful memories, stories, and examples to live by. His final thought for us, comes from a poem tucked into the pages of a recently arrived Reader's Digest: "I am with you still, do not weep. I am with you still, in each new dawn." In another favourite verse from the poem Crossing the Bar, he writes: "May there be no sadness of farewell."

As his brother-in-law Bill wrote to us: "In life he taught us how to live and now he is teaching us how to die."

As a family, we have had the wonderful opportunity, and pleasure, to share our Dad with all of you through his ministry, community service, and political and social activism. We know his spirit lives in all of us and it makes each of us a better person. In celebration of Dad's lifelong commitment to the people and communities he served, Dad was awarded the Saskatchewan Centennial Medal in 2005 and in 2021, was named Saskatoon's Citizen of the Year.

Dad would also want us to acknowledge and thank the management and staff at Stonebridge Crossing for their love, compassion, and care. This was his home for the past four years, and he was a big part of their community in so many ways. He died at home in the loving care of those he cherished at Stonebridge. Thank You!

With Dad's involvement in so many organizations across the province, in lieu of flowers the family asks that you donate to a charity of your choice.

The funeral will also be livestreamed for those not able to attend in-person.  Link will be placed above the obituary the day of the service.

Share Your Memory of
Colin
Upload Your Memory View All Memories
Be the first to upload a memory!
Share A Memory