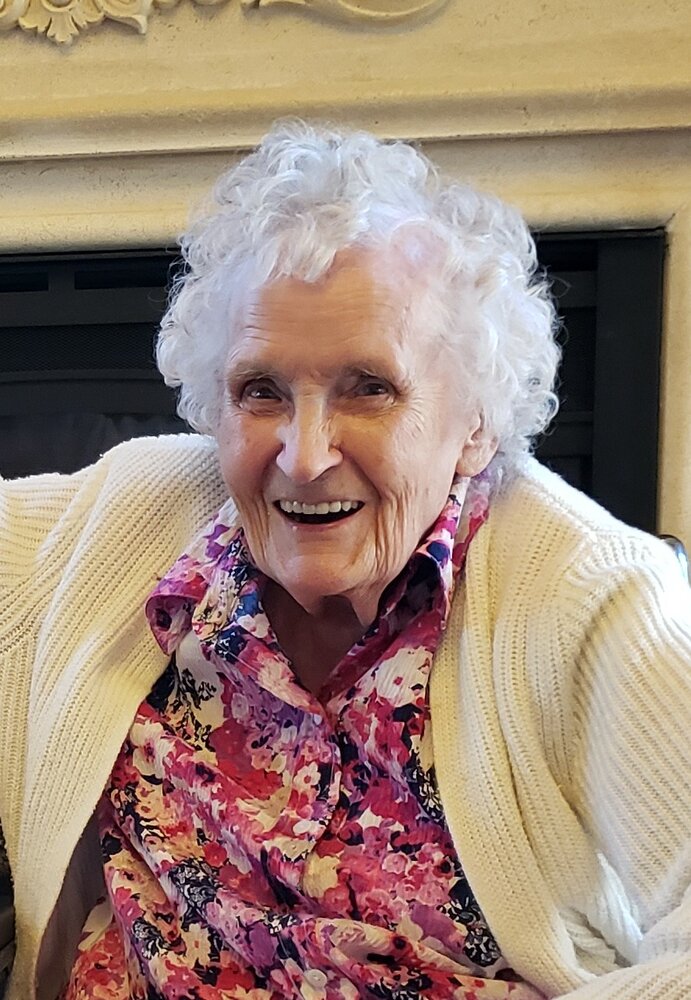 To Watch Video of Service Click This Link: <iframe https://video.ibm.com/embed/recorded/131968353

Dorene Lenore Thomas, age 95, passed away peacefully on July 17, 2022 with her husband and family by her side.  Born in Saskatoon, Dorene was raised on the Zoerb family farm near Delisle until the age of 7 when the family moved to White Fox due to the drought.  In 1945, Dorene started teaching in a one room school after 6 weeks at teachers’ college in the summer.

Dorene married the love of her life, Howard Clark Thomas in 1952.  They were married a few days shy of 70 years. In the later years, Dorene would often bring up the handsome man she married in 1952.
Dorene and Howard lived on the family farm from 1952 to 2014. They had six children: David, Belle, Donald, Melvin, Carol Lynn, and Murray.  Tragically, Donald and Melvin passed away in 1973 in a hotel fire.  Dave and Susan have four children: Courtney, Jefferson (Amanda), Cody, and Kiel.  Belle has three children: Richard (Ashleigh), Angie and Rob (Delia).  Carol Lynn has two daughters: Allegra (Dalton) and Tammara.  Murray and Jennifer have two boys: Liam and Adam.  Dorene enjoyed her great grand children: Kayden, Gabriel, Lyla, Athena, Lennon, Jasper, Livi, and Lenox.

Dorene loved to have a large garden, which she happily shared with others.  She loved her roses.  Dorene was active on the farm, including swathing, combining, or any other farming tasks.  She was grateful to live her life on the family farm.

Dorene loved family and friend gatherings.   Christmas, Easter, Thanksgiving, New Years Day were spent with a family meal (often Norman and Bea Thomas and their kids).   Zoerb/Grandberg family gatherings were eagerly attended.  Many evenings were spent with friends. Whenever Dorene was traveling to some part of the country, she would reach out to relatives for a quick visit.  Visits to her sister in Birch Hills, SK, her daughter, Belle in Grande Prairie and Thomas relatives in Hartney, Manitoba were a common occurrence.

Dorene was active in the United Church and the UCW.  She enjoyed many activities; Old Time Dancing, Square Dancing, and Eastern Star. She was a lifetime member of Saskatchewan Flying Farmers (both serving as Queen and first woman President).

With their plane and their love of travel, Dorene and Howard saw many parts of the world.   They flew their small plane to Expo in Vancouver (‘86), Montreal (‘67), Seattle (‘60), many, many Fly-ins across Saskatchewan and Flying Farmer conventions across the prairies.  Further, they flew their plane to Montreal, Toronto, Florida, Memphis, Arizona, Vancouver, Churchill, South Dakota, Mexico, and others.  Dorene and Howard flew airlines to Hawaii, China, New Zealand, Australia, Scotland, England, Wales, Spain, Gibraltar, Portugal, Morocco, Mexico, United States, Trinidad & Tobago, and Jamaica.  What an outstanding travel record for a couple that grew up in the dirty thirties in Saskatchewan.

Dorene was loved, respected and touched many people.  She had a deep love for family and friends and she always made you feel welcome.   Dorene truly was one of the kindest people around.

Please join us celebrating her life Tuesday afternoon on July 26, 2022, at 2:00 pm at Delisle United Church. The family will hold a “come and go tea” after the service at the Delisle Senior’s Center. The interment will be held the following day.   In lieu of flowers, we ask that donations may be made to Salvation Army or the Delisle United Church in her memory.

The link to view the service on livestream will be found on this web page and will be active just prior to the service.

Share Your Memory of
Dorene
Upload Your Memory View All Memories
Be the first to upload a memory!
Share A Memory