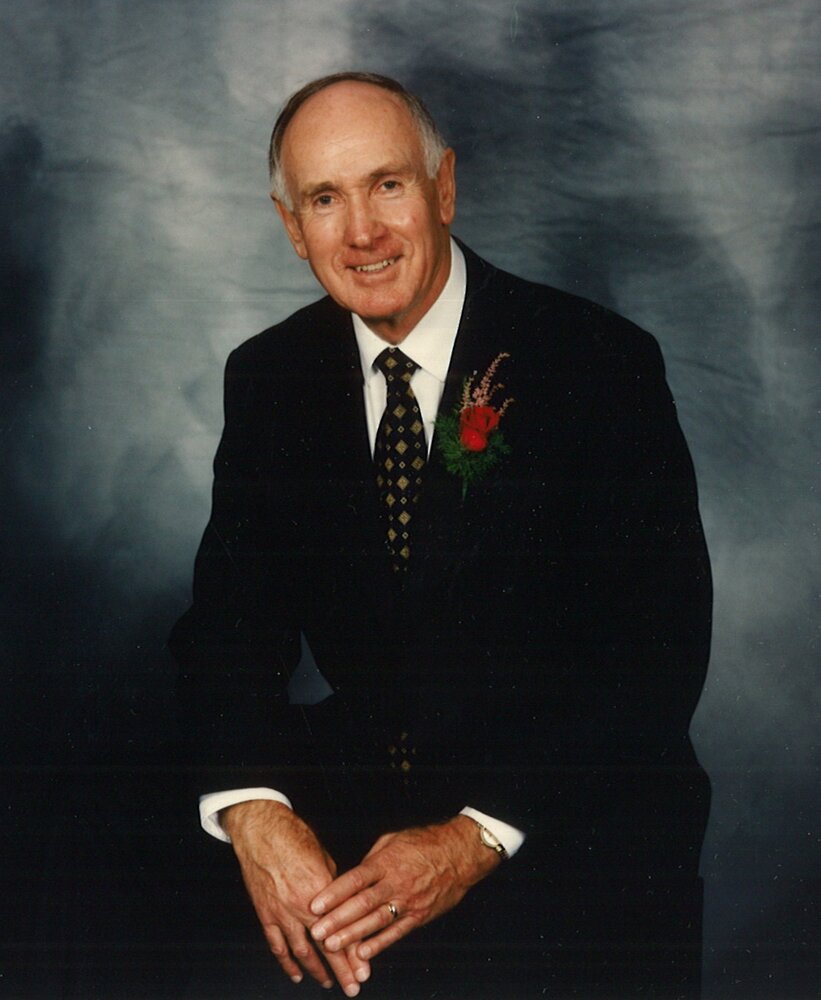 Bob was born at home just outside of Loreburn, Sask., on the family farm of his parents George and Robena (MacNaughton) Dodds, on May 12, 1932. Growing up in the dustbowl 30’s and the World War II years, Bob nevertheless described his childhood as “idyllic”: he had loving parents, two brothers and two sisters, horses to ride, cows to milk and eggs to gather, and all within a close-knit rural community. He played and loved hockey, baseball, and curling, and was a lifelong and passionate fan of the Riders, Leafs, Packers, and especially the Yankees!

After attending the School of Agriculture at the University of Saskatchewan, Bob began a dual career that led to a complex life and a vast social network: in the summers he farmed and was an active community member in Loreburn, and in the winters he taught at the School of Ag, eventually becoming a professor in the Agricultural Engineering Department. In 1956 he married Mary Bolton who had come to teach in Loreburn, and over 37 years together they maintained houses in both Loreburn and Saskatoon, and raised four children who in time gave them fourteen grandchildren.

In his 40 years at the U of S over 4000 students graduated from the School of Ag and Bob taught all of them in one or more classes. He enjoyed hearing about and from these students all his life, and spoke of them as a kind of extended family as they pursued careers all over the prairies and beyond.

Mary died in 1994, and in 1997 Bob married Carol Doerksen with whom he formed a devoted life partnership for the last 25 years of his life. By 2007 Bob said he was “ready to retire”, and sold the farm to two of his nephews.

Bob was a man who valued a quiet life but embraced a social one; who strived for excellence but personified modesty; who held firm beliefs but could change with the world; a passionate man who held his passions in check. He had the gift – though he would have called it a duty – of teaching his family and students to embrace life in all its wonder. He could spot a hawk high over his tractor, or a baby rabbit quivering in the stubble below, where others would scarcely notice the clouds or the swath. Living his entire life near his birthplace, he encouraged his children and grandchildren to explore the globe. In his words: “There is so much beauty in the world. I believe life is meant to be a series of experiences and adventures, and it would be unfortunate if you did not find God in a lot of unexpected places.”

A memorial service will be held at the Circle Drive Alliance Church Chapel on Monday, September 26, 2022 at 2:00 PM. with reception to follow.  Interment will take place at Hillcrest Memorial Gardens.  Donations may be made to the University of Saskatchewan College of Agriculture and Bioresources  or The Luthercare Foundation or a charity of your choice. For those wishing to watch the livestream of the service the link will be found at the top of this obituary page and will be live a few minutes prior to the service.