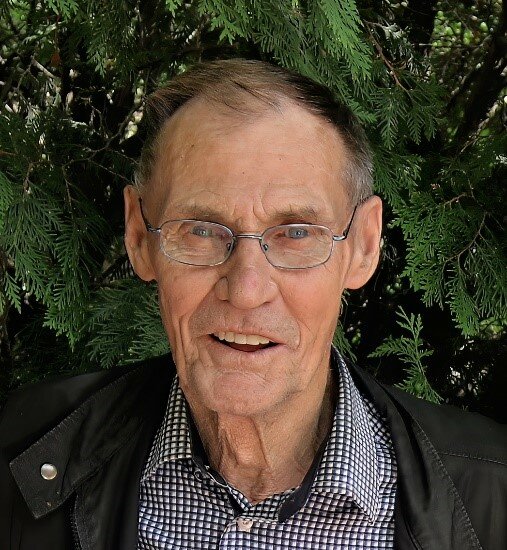 Val passed away on Oct 5, surrounded by his children, after a brief battle with stomach cancer.  Val was born in Saskatoon to Alfred Perrin and Catherine Neal.  He married Anne Peters in 1959. He and Anne raised six daughters.  Later, after Anne’s death, Val married June Zawertailo.  Most of his working life was spent as a serviceman for Saskatchewan Transportation Company where he was employed from 1966 until his retirement in the mid-1990s.

Val enjoyed country music (Hank Williams, Hank Snow and Stompin’ Tom were his favourites), dancing, and watching the Toronto Blue Jays. He also became an avid reader late in life with a preference for non-fiction. He was a member of SaskAlone for many years and was an active participant in their events.  For many years he enjoyed visits to Granada House for a nightly beer and socializing with the other regular patrons.  After his move to St Ann’s Place in April, the venue changed to Red’s Bar & Grill, but more than the beer it self, it was always about having a beer while visiting with people.

The family is grateful to the staff at St Ann’s Home for the care and support provided to Val in his final days.

Rest in peace Dad.   We hope you are able to get the rest of the MLB season up there.

A celebration of Val’s life will be held on Saturday, October 22, 2022 at Saskatoon Funeral Home, 338 4th Ave. North, beginning at 2:00 pm.
The link to view the livestream of the service will be on this website page and will be live just prior to the service.

Share Your Memory of
Val
Upload Your Memory View All Memories
Be the first to upload a memory!
Share A Memory