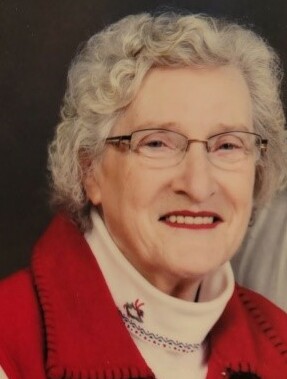 It is with deep sadness we mourn the passing of Yvonne Nickel (nee Hunter) who passed peacefully November 1, 2022 at the Parkridge Care Home in Saskatoon after an extended battle with vascular dementia.

Yvonne was predeceased by her husband of 49 years, Jake Nickel; along with her parents, Charles and Francis Hunter; brother, Chuck (Joan) Hunter; and brother, Ed (Marg) Hunter.

Yvonne was born October 23, 1937 at Wilkie, Saskatchewan and grew up on their family farm just north of Wilkie. She attended a one room school at Fairyland where her mom Francis was her teacher. She graduated from McLurg High School in Wilkie and went on to take a secretarial course at Reeves Business College in Lloydminster.

Yvonne worked as a secretary for the Government of Alberta in Edmonton, and then moved to Unity Saskatchewan to work as a secretary for Sifto Salt in their office where she met and married Jake Nickel. As it was not proper for her to continue working for her husband who was the Office Manager at Sifto, she left and went to work at Ralston’s Electric which was a radio/television/stereo sales and service business that also sold music, records and musical instruments in Unity. When the owner retired she then worked for the local lawyer H T Hepting doing legal secretarial work and assisting clients with their tax preparations until her retirement.

Yvonne was a selfless community volunteer and active in a number of community service organizations as well as the United Church and the Unity and District Museum. She belonged to the local Lioness Club and was active in the Eastern Star as well as supporting Jake in his many service clubs. As well Jake and Yvonne coordinated the local Terry Fox Run for many years in Unity in support of the Canadian Cancer Society.

Yvonne loved to garden and her yard on 7th Avenue in Unity won many awards for the Communities in Bloom for her flowers and landscaping.

In retirement Jake and Yvonne tackled a major construction project at the Unity Museum where they both volunteered. They deconstructed a pioneer stone milk house, individually numbering all of the rocks, transporting them all to town and then reconstructed the stone house, rock by rock, at the museum grounds.  It was a big project that turned out great and a nice addition to the local museum.

The family would like to thank the doctors, nurses and care professionals at the Parkridge Centre, East One Wing in Saskatoon for their wonderful care of Yvonne during her time as a resident there for her final years. In lieu of flowers or cards we encourage donations to the PRC Quality of Life Development Fund in Yvonne’s name. In accordance with Yvonne’s wishes there will not be a formal memorial service held for her, but rather the family will hold a private gathering at a later date.

Share Your Memory of
Yvonne
Upload Your Memory View All Memories
Be the first to upload a memory!
Share A Memory