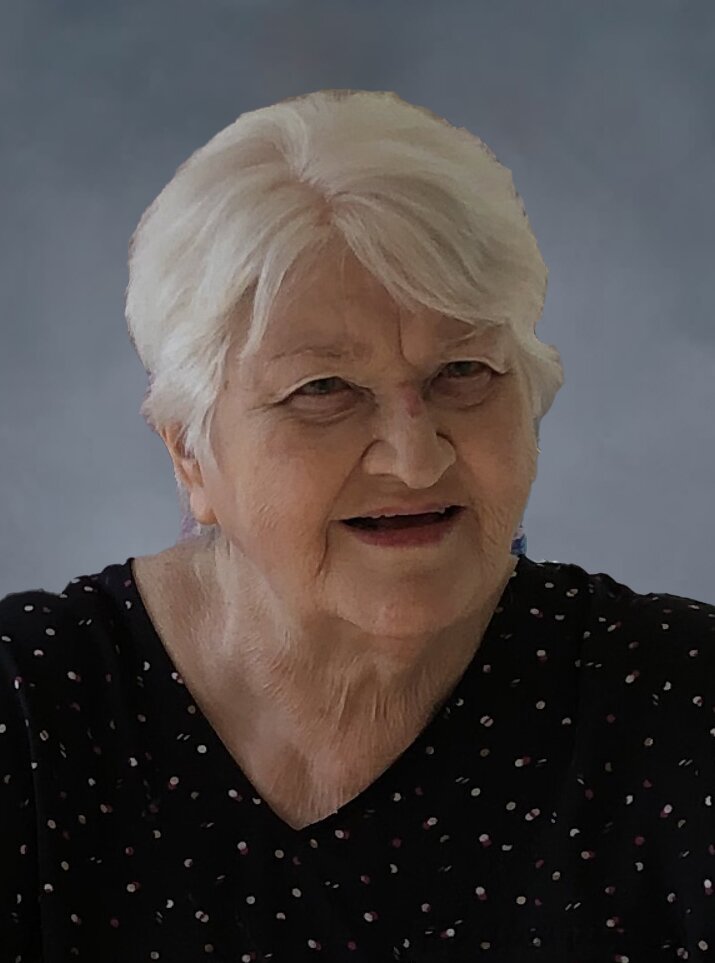 The link will be life approx 5 minutes before the service.

Mary Jean (Ewen) Daelick passed away on November 13, 2022 at Royal University Hospital in Saskatoon. Mary was born on May 10, 1948 at St. Paul’s Hospital in Saskatoon, the oldest of Jim and Ruth (Hunter) Ewen’s seven children. She was named after both of her grandmothers.

The family lived in the Haliburton and Lockwood districts. Mary attended Lockwood School for Grade 1 and then her Granddad Hunter insisted the family move near a town so that Mary and her siblings would be closer to school. In 1956 the family moved to the MacDonald farm, 1 ½ miles east of Jansen. Mary attended Jansen School until Grade 8 and then Lanigan Central High School.

Mary was very involved with community and school activities. She was an excellent athlete taking part in track & field, softball, basketball and curling. Mary would tell stories of going to basketball games and practices after school, then taking the train from Lanigan to Jansen to get home. But she wasn’t home yet as she still had to walk the 1 ½ miles to the farm. She played clarinet in the Jansen Band and was with the band when they appeared on TV on November 16, 1962. She was also a 4-H member and leader working at Camp Rayner for one summer.

Mary went to high school with Ray Daelick from Esk. Ray thought Mary was something special but Mary wasn’t too convinced by Ray. He had to be persistent until she finally agreed to go on a date with him. Their first date was to go see the James Bond movie, Thunderball. That must have impressed Mary as they were an item after that. Mary and Ray were married on November 22, 1968.

They made their first home in Esk and welcomed their three daughters – Corinne, Barbara and Colette. Mary was an exceptionally strong person. In 1972-73, Ray went to school in Saskatoon to earn his Heavy Duty Mechanic certificate and would come home on the weekends. This left Mary at home with two toddlers, a newborn and, as it turned out, a litter of puppies when their dog delivered early. Her ability to be organized and get things done was amazing.

They lived in Lanigan briefly before moving to the Daelick family farm in November 1974. They were the 4th generation of Daelicks to live and work on the farm. Mary loved living on the farm where she could grow a large garden and go for long walks in the country. It was hard work but both Mary and Ray enjoyed farm life.

They also enjoyed visiting with family and friends. Going camping at Manitou Beach with Jim and Janice, visiting Ron and Joyce at Barrier Lake and Saturday night trips to the Jansen Steak Pit. These connections to friends and community were important.

Having three daughters kept Mary busy. When the girls were little, she was still able to curl and sat on the board of Knox United Church in Lanigan. But as the girls got older, she focussed more on their activities. She was president of the Lanigan Figure Skating Club, was a parent helper for the Esk and Jansen girls softball teams and became a soccer Mom when all three girls played competitive soccer. Her homemade doughnuts were famous among all the players as Mary often sent doughnuts on soccer road trips.

Mary earned a certificate from the Kelsey Home Care Services program in 1985 and worked as a home health aide in Lanigan and area and then later, in the Saskatoon area. Mary was a very caring and compassionate person so it was not surprising that she chose this career. She enjoyed spending time with many of her clients, especially those she had known since she was young.

After Ray passed away in 1996, Mary continued to live on the farm until 2000 when she moved to Martensville to be closer to her girls. She continued to work in home care until she retired in 2007.

Mary got her greatest joy from her cherished grandchildren, Emma and Ewen. Mary loved to babysit and spend time with them when they were young. As they grew older, she was often on lunch duty with them and was always ready to attend any of their events. Even as they grew to adulthood, Mary was always happy to hear about the adventures of Emma and Ewen.

Health issues meant that Mary couldn’t be as active as she would have liked in retirement. She loved reading and classic TV shows, going for drives in the country and watching as much curling on TV as she could find. Being with her family was her favourite pastime. Mary enjoyed playing board games with the family and in particular Uno and crokinole on Christmas Eve.

A funeral service will be held on Friday, December 2, 2022 at 2:00 pm at Knox United Church in Lanigan, Saskatchewan. Interment will follow at the Esk Lutheran Cemetery.

In lieu of flowers, donations can be made to: Diabetes Canada, Esk Lutheran Cemetery or a charity of your choice.