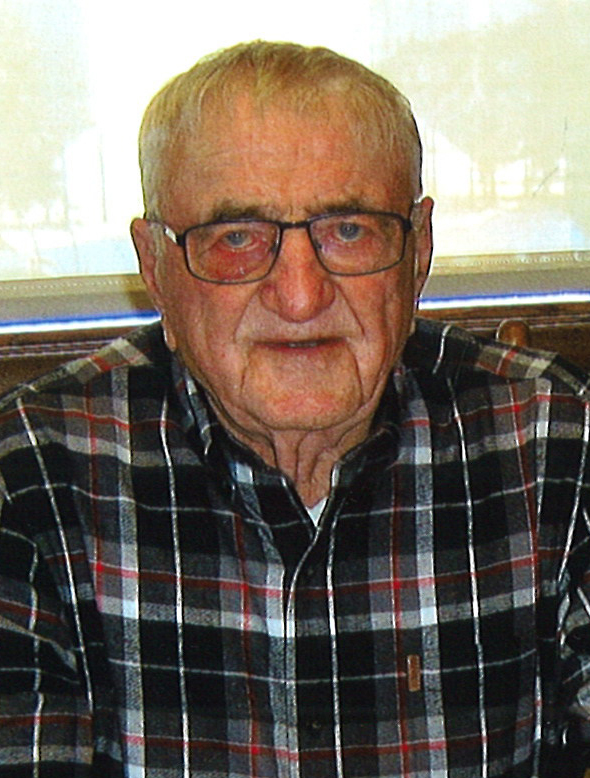 To watch the recording of the Service click this link:

Edwin Emil Loessin was born November 13, 1931 at home on the farm near Radisson, Saskatchewan. He first attended Waterbury school and after moving to town achieved his grade 12 at Radisson School.  Edwin started farming at age 17.  His brother, Albert, joined him a few years later, and together they grew the farm and feedlot.  Edwin and Albert were very close and worked side-by-side on the farm and on many community projects.  Edwin met Miriam Voss when she was teaching at the Radisson School, and they were married on August 20, 1960.  They had 3 sons, Nolan (1963), Corey (1964), and Jeff (1970).

Edwin loved his family, his farm, and his community.  He was a clever, quiet, determined, and hard-working man who loved a challenge.  There was no project he wouldn’t tackle, and everything he did was finished completely to the highest standard.  Edwin combined his first crop at age 9 and his last crop when he was 89.  He loved to curl and was pivotal in building and maintaining the curling rink in Radisson.  He led the project to install the new ice plant and made the ice for many years until his health declined, at which point he carefully instructed the next generation.  His concrete work is well known in the community – from basements to pig barns to bin bottoms.  Edwin also loved working with metal – constructing all the corral fencing at the feedlot and the railings for the Lutheran church ramp.  To prove that a farmer can do even the more unusual, he built a cab for the Terex scraper and for the D7 CAT.  These additions made working on projects in cold weather possible.  In addition to his work with the curling rink, Edwin served on the church council and the Rec Board, and he was honored by the community of Radisson in 1995 as its Citizen of the Year.

Edwin passed from this life to meet his Heavenly Father on November 23, 2022 at St. Paul’s Hospital at the age of 91.  He was predeceased by his parents, Emil and Martha Loessin; brother Albert Loessin, sister Elsie (Bob) Flath, infant sister Emma, granddaughter Hope and granddaughter-in-law Breena.

Share Your Memory of
Edwin
Upload Your Memory View All Memories
Be the first to upload a memory!
Share A Memory