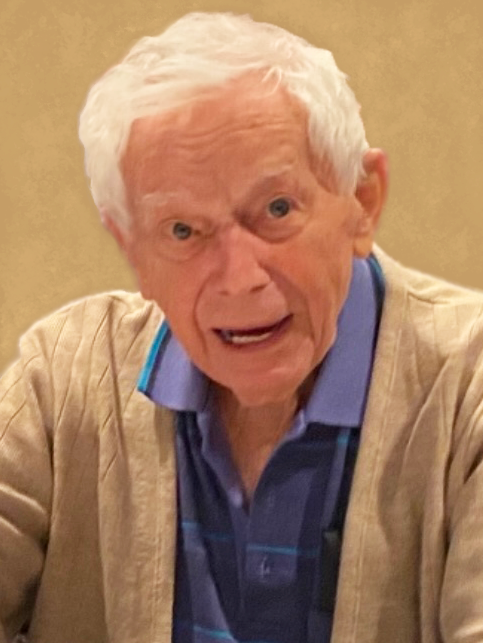 To Watch The Recorded Live Stream of Service click this link: https://video.ibm.com/embed/recorded/132426053

It is with heavy hearts that we announce the passing of Harold E. Haid into the care of our Lord, passing at the age of 97 on Monday December 12, 2022 in Saskatoon.Harold is survived by his children Brad (Debra) Haid and Lynne (Vince) Salamon.  He also leaves behind his adored grandchildren Robert & Laura (André) Haid; Haylea (Josh) Miller & Erik Salamon; his sister Mabel (Alex) Marshall; attentive nieces Brenda (Doug) Agnew and Cathy Karsgaard; as well as a host of relatives & friends.  Special thanks also to Dawn, Harold’s Hospice Society volunteer.

Harold was born and spent his early schooling years in Saskatoon, before going off to St. Thomas Boys College in North Battleford for his senior elementary schooling.  He spent 3 years working for Lone Star Auto Electric and then 1 year at tech school followed by 2 years at the University of Saskatchewan (Engineering), before leaving school to join his father full-time at Haid Construction (founded 1921).  In 1954 Harold met Lorna at a curling event and they married 2 years later.  In 1960 they moved from the Keewatin Apartment building in Saskatoon to their home @ 706 Preston Avenue (which H&L designed & Haid Construction built).  Harold also built several cottages at Waskesiu, including the family cabin.  Harold took over Haid Construction in 1964, following his father’s passing.  In 1978 Harold was elected President of the Saskatoon Construction Association and later served as Director of the Saskatchewan Construction Association in 1981.  In February 1994 Harold sold Haid Construction, as a whole to 3 long time employees (Gary MacGregor, Tim Keys & Ed Krynowski), and then remained active within the company for 3 more years.  In 1995 he was inducted as an Honorary Lifetime Member of the Saskatoon Construction Association.

Harold was always a physically active person.  During his early years Harry Bailey taught him to swim at the YMCA, and subsequently he became a part-time swimming instructor in the 40’s and 50’s.  Besides water skiing, he also was an avid downhill skier, which started with ski jumping off the east bank of the South Saskatchewan River with the Saskatoon Ski Club.  His love of skiing eventually became more than just volunteering and a recreational hobby.  In addition to the construction company, in the mid-1960’s Harold & 3 friends bought Larry’s Ski Shop in Saskatoon, and shortly there-after renamed it “The Ski Haus”.  After several years of operation, he took over sole ownership and expanded the business line to form “Ski Haus / Bike & Hike”.  Harold was heavily involved in the planning & development of Mount Blackstrap Ski Hill for the 1971 Canada Winter Games.  He owned and operated the pro shop at Blackstrap for many years; personally taught & coordinated ski lessons and was instrumental in bringing the Nancy Greene Ski School and coaching certification to Saskatchewan.  In the 1980’s he sold the ski business but continued to ski well into his 80’s.

Harold and Lorna were also active in the community.  For years Harold was an active member of the Nutana Kiwanis Club; Nutana Gyros and the Knights of Columbus.  Harold & Lorna were both members of the Nutana Rotary Club.

The funeral service will be held at the Saskatoon Funeral Home, at 10:00 am on Wednesday December 28, 2022.

In lieu of gifts / flowers, please consider making a donation to your charity of choice, and/or to any Saskatoon Hospital Foundation.  Special thanks to Dr. Barbara Anderson for her years of medical guidance, and to all staff & friends at Riverside Luther Terrace in Saskatoon.

Rest well Dad.  We love you!

Share Your Memory of
Harold
Upload Your Memory View All Memories
Be the first to upload a memory!
Share A Memory