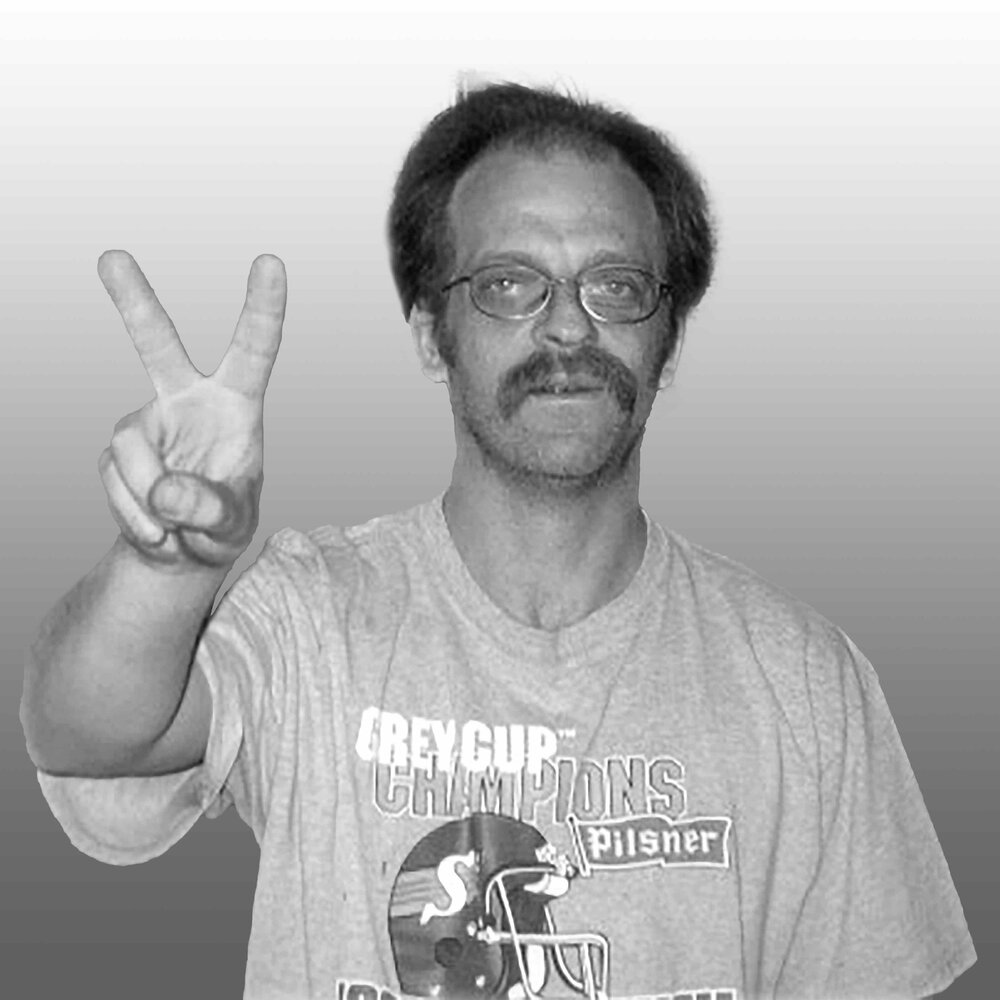 It is with great sadness that family and friends of Dean Monseler announce his death on 15 Dec 2022.

Dean was born in Saskatoon on 24 Jan 1968. He was a gentle, kind, generous man who always thought of others. His legacy is years of creative artwork and logo for Ness Creek Festival who honoured him at the 25th anniversary. He loved playing his guitar, music and Northern lakes.

Dean is predeceased by his parents Nancy and Leo Monseler. He is survived by his wife Sandra Gordon and numerous family members. He was often heard thanking St Paul’s Palliative care staff for their outstanding care. Family and friends thank St Paul’s staff too. A party to remember Dean will be held in the new year. Memorial donations may be made to www.cancerfoundationsk.ca or cmhasaskatoon.ca/donate/. We love and miss Dean.

Dean joined the Monseler family when his three brothers and sister were much older. He was a happy, smiling tot and as a child, an athlete he was not: enthusiastic but happier to explore on his own. He was an exquisite and talented artist.  He was commissioned to design posters and logo (1991) for the yearly Ness Creek Festival which he made it his mission to always attend.

He worked at various jobs throughout his life, planting trees in BC, harvesting rice in Northern Saskatchewan and volunteering with the Service Corp through Scouts Canada. He lived his life close to nature in a humble way.

Dean is really going to be missed for coffee and cards.

At family gatherings, Dean was always present.  He could be found off to the side quietly socializing with a few close friends or family members.   As he grew older, he married and became a true caregiver to his wife Sandy.  He was quiet, thoughtful and sensitive.  He always was quick to volunteer  whenever needed at family functions and seldom complained. Dean always put other’s needs first before his own.  He was kind, generous and caring throughout his life. He suffered many health issues throughout his life but not much fazed him, he always put other people first and was always concerned over the people he loved. As the youngest he should have been the one saying bye to us and not us saying good bye to him. When Dean became aware of his imminent destiny, he took strides to make his conciliation with the world around him. He passed on with no regrets. Your fight is over rest well.

He was a man of few words and was blessed to have a small group of his very own trusted and true friends.  He was forever grateful for their loyalty, support and friendship over the many ups and downs throughout his life. Dean was a gentle soul who always showed unconditional and everlasting friendship.

Service Corps Days - Dean was fearless in a lot of ways. A rugged individual, though without the ego do often associated with these types. During a training trip departing from Anglin Lake, the group was found to be with an odd number of canoeists which provides a difficulty, as three in a canoe is awkward and dangerous, and a solo canoeist is difficult and inefficient.

Dean happened to be in one of the vehicles, though he had not signed on to the trip, and had nothing other than the clothes on his back, he quite happily volunteered himself as the solution to this problem. He offered his services as a paddler, without a sleeping bag, rain gear, dishes, cutlery, or a toothbrush.

Dean seemed to be relatively unfazed by his complete lack of supplies. He simply borrowed what he genuinely needed, which seemed to be very little. Fortunately, we were blessed with mostly decent weather. When it did rain, rain gear was simply fashioned from large black garbage bags.

At night, in the absence of a sleeping bag, Dean would sleep with an assortment of clothing, life jackets and a tarp. In the morning, when the first man got out of the tent Dean would understandably take advantage of the warm sleeping bag and hop in while the fire got started, and breakfast and coffee were being prepared.

Dean took one for the team and single-handedly reinvented the concept of “light weight camping” on that trip. Dean showed the importance of being humble and always reminding friends to “not sweat the small stuff”.

Dean was a lot of things.

Funny as heck.
A prankster extraordinaire.
Generous.
Loved animals.
And BEES!!
A very gentle soul.
A poet, an artist, a musician.
His contributions to the Ness Creek Festival cannot be overstated.
Always available for a cup of coffee. ALWAYS!!
Humble, kind, caring, selfless.
Always up for an adventure.
Always seemed content with what he had.
Was never materialistic or envious or jealous.
He was a great friend, and always understood the concept of brotherhood, and true friendship.
He never held a grudge.
He rarely got angry, and he was impossible to get mad at.
When he was delivered the very worst news, he faced his end with absolutely remarkable courage and grace.
His concerns were not for himself. His main concerns were for his wife, Sandy, and stepson Michael.
But Dean accepted it, and faced it with admirable bravery, selflessness, and dignity.
DJ, Blair, Ken

The Water’s Edge by Cal Ross

Rugged buggers
Full of fight
Over the white water
And the portage with might.

Mosquito bites bother
Horse fly my ass
We just lit a fire
And smoked out the last.

Share Your Memory of
Dean
Upload Your Memory View All Memories
Be the first to upload a memory!
Share A Memory