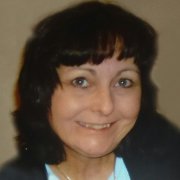 1957-2016 It is with extreme sadness that the family announces that the sudden death of Debbie Craig (lovingly known as Gigi), occurred at Royal University Hospital on Thursday, February 18, 2016. She is survived by her partner Brian Rudolph, daughter Amy Price (Trevor Schiller), granddaughters Kaitlyn and Jorja Price and Tatem Rotinsky, parents Helen Garland and was predeceased by her father Frank Garland and brother Bob Garland. She is also survived by her sisters Bev Sauer (Karl Sauer) and Kathy Garland, sister-in-law Angela Garland, as well as her four nephews Brett, Scott, Jason and David. Debbie was born to Frank and Helen Garland on May 7, 1957 in Saskatoon where she was raised and completed her schooling. Debbie loved gardening and as a real animal lover she looked forward to taking care of everyone’s pets. She was a great pool player, and also enjoyed curling. Debbie will be dearly missed and lovingly remembered by her family and many friends.

Share Your Memory of
Debbie
Upload Your Memory View All Memories
Be the first to upload a memory!