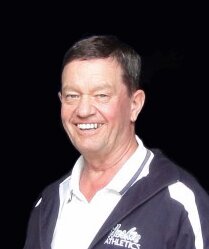 We are deeply saddened to announce that Dick passed away peacefully on January 10, 2023. He leaves behind his loving wife, Caryl, of 57 years; son, Rich and daughter-in-law, Emi; grandchildren, Lauren and David; sister-in-law, Leslie; nephews, Curtis (Shanna) and Craig (Darlene), who were like two additional sons to Dick; grand-nephews and nieces, Olivia, Ethan, Mackay, Liam, and Sophia; and numerous other beloved cousins, nephews, and nieces.

Dick was a proud Saskatonian, graduating from Nutana Collegiate and then from Physical Education at the U. of S. He spent his summers working for his Dad and with his brother Ron at Merlin Motors and lifeguarding at the Banff hot springs. After obtaining his Master’s Degree and Ph.D. from Michigan State University, he returned to Saskatoon to begin a 31-year career as a professor at the College of Physical Education (later Kinesiology).  Dick adored teaching and the energy that his students brought to the classroom, not to mention the highly popular golf and skiing activity classes that he introduced into the curriculum.  He loved mentoring his students and always made time for them.  His students in turn twice voted to award him the USSU Teaching Excellence Award.

In the early 1970s, Dick helped to launch ParticipACTION in Saskatoon, which included organizing exercise challenges with Saskatoon’s sister city, Umea, Sweden, and which initiated a significant change in lifestyles regarding fitness and exercise in the province.  He contributed much to the academic literature in Kinesiology with research regarding the impacts of blood-doping on athletic performance, the safety of “make weight” attempts in wrestling, and the relationship between size and growth in adolescents and maximum aerobic power (VO2 max), among many other topics. He enjoyed two research sabbaticals in Switzerland and Germany, and in the summers before and after each one he drove the family in various camper vans (including one from England with right-hand drive) through almost every country and campground in western Europe.

Dick had a happy and full life, spending his spare time jogging and cross-country skiing up and down the riverbank (before there was a Meewasin Trail) with friends and fellow faculty members, golfing at Riverside, and relaxing at Waskesiu, where he would try to convince anyone who would believe him that the water temperature was always 84F.

Dick was above all a people person.  He loved engaging in spontaneous conversations with both friends and strangers and chatting up everyone on the driving range at Riverside.  Dick always saw the best in people and in every situation and was always interested in the lives, accomplishments, and interests of those around him.  He made others feel special and appreciated. His family was always his first priority as well as his greatest source of pride, and he will live on in the gregarious and active lives of his grandson, David, and his granddaughter, Lauren, as she begins her own Kinesiology studies in Texas.

Caryl and Rich would like to thank Dick’s extended family and friends for their incredible support and love for him over the last several years, as well as the kind and dedicated staff at Luther Special Care Home.  In lieu of flowers, donations in honour of Dick’s memory may be made to ParticipACTION, LutherCare Foundation, or the charity of one’s choice.  A reception and celebration of Dick’s life will be held later this year.

Share Your Memory of
Richard
Upload Your Memory View All Memories
Be the first to upload a memory!
Share A Memory