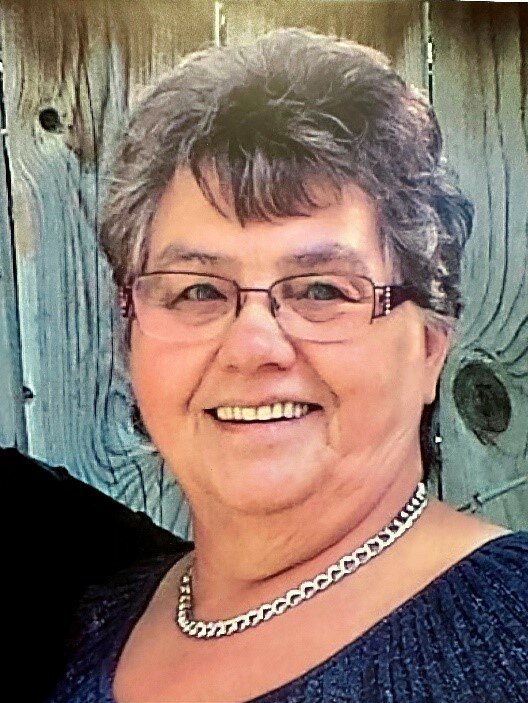 On the morning of January 10, 2023, in Saskatoon, SK, Marjorie Jane Hoskins, at the age of 77 years, surrounded by the love of her family, said her final, “I love you too.” She had her blankets pulled right up under her chin, as was her preference, and she peacefully slipped away.

She took with her special memories of family get-togethers, a treasure trove of laughs (because seriously that laugh of hers would get you every time!), a penchant for giving everything a try (“why not!”), her knowledge of how to make something incredible out of just about anything, whether that was a homecooked meal or an art project, and an indescribable amount of unconditional love that she shared with so many. We are sad for ourselves because we were not nearly ready to say goodbye to our mom, but happy for her—it was what she wanted. She went out singing a song and cracking a joke.

Marjorie Jane was born in Denholm, SK on April 22, 1945, to Olga Seib (Lerch) and Wilhelm (Bill) Seib. She came from a large family of 14 children, Ethel, Laura, Irene, Gordon, June, May, Lloyd, Marlene, George, Judy, Janet, Ken, and Sherran. Marj grew up caring for her siblings and was always there for others, even through her own hard times. Marj met Jack Hoskins in Glaslyn, SK and they married on June 21, 1965. On the farm outside of Glaslyn, they raised their family of 7: Eugene (Carol), Elaine (Don Halliwell), Bev (Dwayne Ross), Arlene Semple (Murl Reinhart), Stacy (Kevin Pizzey), Tania (Murray) Hunter, and Elsa (Mason) Roberts together until Jack’s passing in 1984.  Marj then met another gentleman named Art and had a son, Dylan (Melissa) Hoskins, with him.

Marj loved to spend time with people and enjoyed hearing stories of adventures. She loved to travel when she could, and enjoyed vacations and touring with her daughters, her siblings, and her friends. Although there were places, she still wished to see, she was grateful for and enjoyed any opportunity to go on an adventure of her own. She was the consummate crafter and sewer and was planning on projects and fashioning up a helping tool for herself right before going into the hospital.  She was a collector of items she would repurpose into something she needed or something that she had seen on Facebook and wanted to make.  Mom spent many hours sitting at her sewing machine creating projects from her imagination.  Through the years many of us were gifted with her craft projects; whether it was a quilt made from pieces of material she had been collecting for years, a crocheted baby blanket, a new toque and scarf set, a pair of slippers, a new skirt, or a pair of handmade moccasins. Mom gifted all of us with what she created from that magical brain and her love.

If you have ever been to Marj’s house, you know she loved her decorations. Her small home was filled with mementos and pictures of her children, grandchildren, and great grandchildren, and others that she loved very much.  Inside and out, she decorated for every special occasion.  Christmas was her favourite though.  She would have so many decorations around her home to celebrate the magic of the season. Our Mom would spend hours watching every Christmas movie imaginable and if you came for a visit, you were soon just as engrossed as she was.

During the time Marj was raising her children in Glaslyn and Rabbit Lake, she was involved with Royal Purple and the local 4H club, both social activities for her that helped her to be part of the communities. Marj is most notably known for her role as a caregiver, but she was also a business owner with her partner, Art, running a restaurant in Rabbit Lake called MAGS Café, where she raised her two youngest and supported her daughters in raising their own babies.
Throughout her life, Marj opened her home to many foster children and was able be part of 101 children’s lives. Some of the children stayed for short periods, but some truly became part of our family, and she was proud to call them her own, including Bradley and Ashley Shingoose, and the countless others who continue to love and be loved by this incredible woman. Marj was fortunate to live in many locations which include Glaslyn, Radisson, Rabbit Lake, Hay River, Langham and then lived out her remaining years in Saskatoon.

Once retired from being a foster mother, she worked for a time at Giant Tiger and made sure every customer was her most important. Marj went on to continue caring for others in the ways they needed most. Over the course of the last seven years, Marj made strong connections with people inside and outside of the Fairview Court Community and provided them support and friendship.
Marjorie-Mom, Oma, Nana, Grandma, Aunty-left a legacy of laughter and love and will be missed very much.

A Celebration of Life will be held on Saturday, January 14, 2023 at 4:00 p.m. at Saskatoon Funeral Home (338 4th Avenue North). For those unable to attend the service, the family invites you to join the service via the livestream link posted above the obituary.

Share Your Memory of
Marjorie
Upload Your Memory View All Memories
Be the first to upload a memory!
Share A Memory