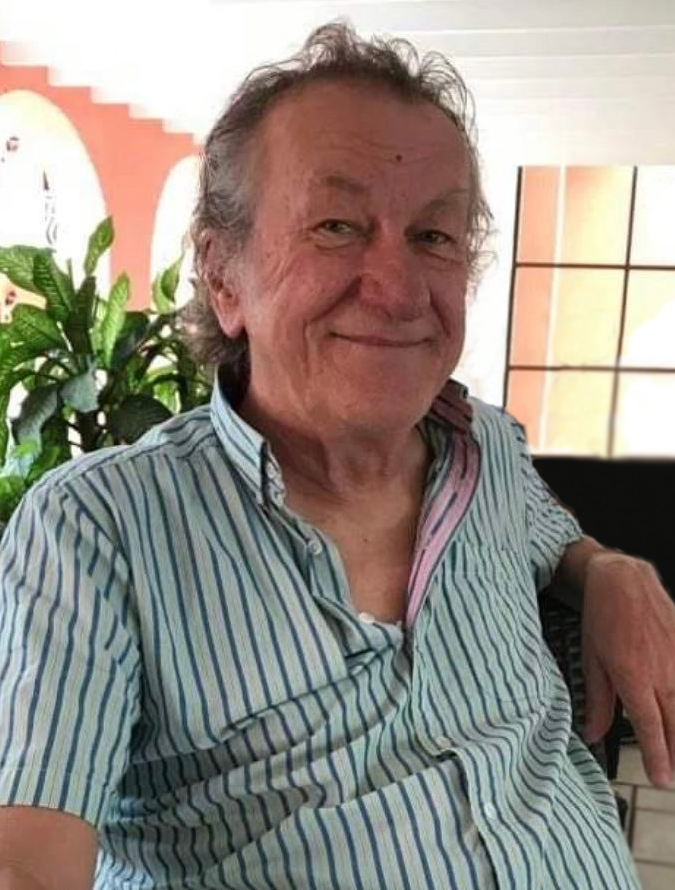 To Watch Recording of The Service click these links, there is a part one and part two.

The Full Screen version of the slideshow is at the bottom of this page.

Mervyn Szuba died peacefully on January 23, 2023 at Royal University Hospital in Saskatoon of cancer, surrounded by his loving family.

Mervyn was the son of Stan and Gaye Szuba.  He grew up in Saskatoon, raised by his mother and stepfather Gavin Byrne and doted on by his sister Linda.  He attended several elementary schools and Saskatoon Technical Collegiate.  He obtained his barber diploma in Regina and opened his first shop in the basement of the Ritz Hotel in 1969.  He continued to groom the heads of men and women in several downtown Saskatoon locations until 2021.  Lawyers, judges, politicians, musicians, street people and anyone who knew a good haircut when they got one kept him wearing out the lino around his chair.  He was very sad when his health forced him to leave the job and the clients that he loved.

Mervyn and his wife Jonny raised their family of Sean, Kory, Rebecca and Mathew in a house on Main Street that Mervyn renovated himself.  As the years passed the family grew to include Sean’s wife Lynn and their children Taylor and Brett and Kory’s wife Molly.  Rebecca and Greg Adams have two children, Ashley and Dillon.  In 2000 as their nest emptied Mervyn and Jonny moved to a house at Pike Lake built by Mervyn.

Music was an important part of Mervyn’s life and he had a lot of fun playing drums in The Pig Boys and Better Off Red with his friend and business partner Konni Horne.  Many enjoyable times were spent practicing in the garage on Main Street , in the rehearsal space on 2nd Avenue and in the garage at Pike Lake.  Mervyn and Konni were original board members of SOMA (Saskatchewan Original Music Association) and they were proud that their bands played original music to their many fans.

Mervyn married Carole Sutherland in 2013 and became a step-dad to Gabe Sutherland and Louise Yaganiski and her husband Kole.  He enjoyed re-living the Grampy experience with Arthur, Evangeline and Sebastian.

Politics was one of Mervyn’s favorite topics and he held strong opinions that he felt compelled to share with the unenlightened.  Once in the chair, a client would get a lesson in strong debate and Mervyn was always delighted with fresh meat for a good argument.  You probably wouldn’t convince him to come over to your point of view but he really enjoyed the attempt.  For the final record, he was not a fan of the current administration federally.  Enough said.

Not enough can be said about the compassionate care provided to Mervyn at St. Paul’s Hospital and Royal University Hospital and the nurses, continuing care aides and doctors in those institutions.  There  is a special place in heaven for those people.  Thank you as well to all the friends who offered their support and prayers to the family during Mervyn’s illness.

Mervyn’s corneas were donated to the Eye Bank of Saskatchewan.  Please consider talking to your family about organ and tissue donation.

A Memorial Service  will be held at the Saskatoon Funeral Home on Friday, January 27 at 2:00 pm. The Service will be livestreamed and can be viewed by clicking the link above on the day of the Service.

Share Your Memory of
Mervyn
Upload Your Memory View All Memories
Be the first to upload a memory!
Share A Memory