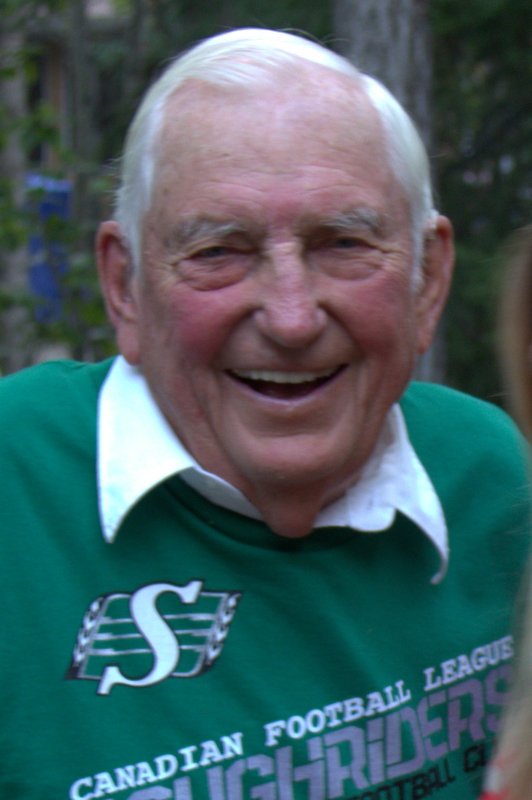 With deep regret, the family and friends of John “Renne” Anderson announce his passing on October 26, 2019. Renne was born and raised in Saskatoon, the eldest of three boys. He was predeceased by his parents, his brother Anders (Andy), his sister-in-law Joyce, his first wife Jean and his daughter Brenda. He is survived by his wife Betty and her family, daughter Loye and son Kent and his family, brother Fritz and sister-in-law Hazel as well as numerous nieces and nephews. Renne attended Mayfair School and Bedford Road High School. Renne joined the Air Force in 1940. He was sent overseas and became a member of the 408 Goose Squadron. He was trained as a radio operator. Along with six crew members he survived 32 flights over Germany as a part of Bomber Command. Before returning to Canada he was promoted to Pilot Officer. In 1944 Renne returned to Canada and became a railway mail clerk until that service ceased. He then worked for the Public School Board in the facilities department. Renne was an enthusiastic sportsman and fan. He loved fishing, golfing, swimming and snorkeling , shinny and curling. He was a hockey and football fan. Renne was a Mason and loyal member of the Royal Canadian Legion Branch 63. Throughout his life he loved Waskesiu and purchased property at McPhee Lake so he could access the northern woods year round. At his request, he will be interred in the Prince Albert South Hill Cemetery, Field of Honour, Thursday, October 31, 2019 at 1:00 pm. A Memorial service will be held on Saturday, November 2, 2019 at the Royal Canadian Legion, Branch #63 ( 606 Spadina Cres W) in Saskatoon  from 1-3 pm. In lieu of flowers, memorial donations may be made to Saskatoon Legion Branch #63 or to a charity of choice.

Share Your Memory of
Renne
Upload Your Memory View All Memories
Be the first to upload a memory!