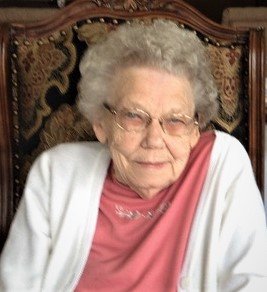 Alma passed away peacefully in Calgary, following a lengthy battle with pneumonia. Alma was raised alongside her two brothers and three sisters on a farm near Aberdeen, Saskatchewan.  She then moved to Saskatoon, where she lived most of her adult life.  Alma worked at Quaker Oats Mills, became an owner/operator of a confectionary in Westmount and subsequently a hardware store in Westview, where she became a fixture in the local community.  She completed her career as head of the toy department at Kresge’s in Midtown Plaza. A tireless bundle of focused and determined energy, Alma was a prolific gardener.  She enjoyed crochet and needle-work, ceramics and design and painting of crafts and lawn ornaments. Alma was predeceased in 2011 by William, her husband of 57 years.  She is survived by her son, Ed (Arlene), grandchildren Chris and Joanna, and by her brother Arnold and her sister Eleanor. The funeral service will be held at Saskatoon Funeral Home, 338 4th Ave. N. on Thursday, November 28, 2019 at 1:00 pm. Interment will be at Woodlawn Cemetery.

Share Your Memory of
Alma
Upload Your Memory View All Memories
Be the first to upload a memory!