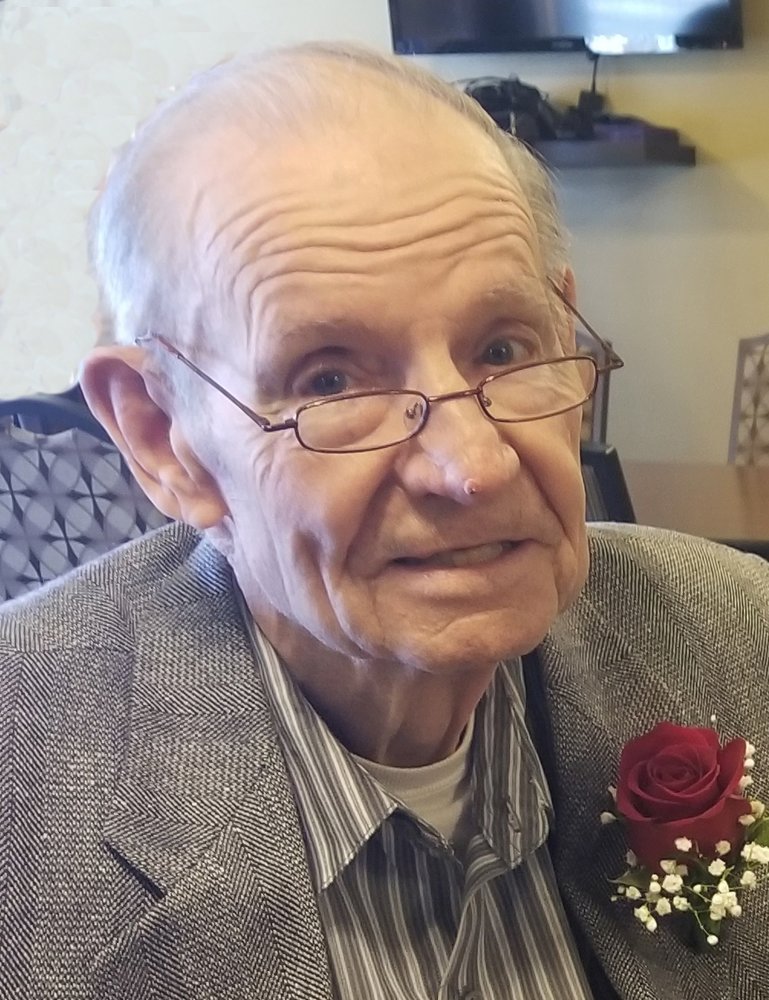 William N. (Bill) Sexsmith passed away peacefully on May 9, 2020 at his residence at Stonebridge Crossing. He was a wonderful and loving Husband, Father, Grandfather and Great Grandfather. He loved spending time with his family above all else. He is survived by his wife of 65 years Mildred (nee Pearen); His children Cal (Nancy), Daryl, Jeff (Debbie) and Colleen; Grandchildren Michael, Kaley (Kenton), Payton and Kelsi; Great grandson Oliver; and several nieces and nephews.
He was predeceased by his parents William P. and Grace (nee Jones) Sexsmith; special Aunt Mildred Sexsmith; Parents in law Carl and Agnes (nee Somerville) Pearen; Sisters in law Frances (Tommy) Anderson and Ruth (Ray) Fay; and brother in law Lloyd Pearen (Joy).
Bill was born August 27, 1930 in Saskatoon City Hospital and moved shortly thereafter with his parents to Rosetown. Following the death of his mother in 1933 his Aunt Mildred helped his father raise him in both Saskatoon and Rosetown. He took most of his schooling in Rosetown but also attended Victoria School in Saskatoon and completed his high school at City Park Collegiate in Saskatoon. Summers were spent at the family cottage, first at Clearwater Lake and later at Emma Lake. Following high school he attended the University of Saskatchewan earning his Bachelor of Education degree majoring in Physical Education and later attended the University of Alberta earning a post graduate diploma in vocational guidance.
While at university he played goal for the Huskies Hockey Team and spent the summers in the Canadian Army officer training program learning to be a tank commander. Following university he spent several years in the active armed forces reserves and was commanding officer of the Prince Albert Army Cadet Corps attaining the rank of Captain.
He taught school in Craik, Birch Hills and Yorkton before settling in Prince Albert in 1956 where he was on the original staff at Riverside Collegiate where he taught physical education and coached football in addition to teaching academic subjects. In 1963 he moved to the newly opened Prince Albert Technical High School as guidance counsellor. When Carlton Comprehensive School was opened in 1975 he became the vice Principal of Instruction, making Carlton the third high school in Prince Albert where he was a member of the original staff. After ten years as vice Principal at Carlton he stepped down as vice Principal but continued in an administrative role at Carlton for another year prior to retiring in 1986.
While attending summer school at the U of S in 1953 he met Mildred Pearen, his future wife, while driving his Studebaker across the University Bridge. They married in 1954 in Indian Head and lived in Birch Hills and Yorkton before moving to Prince Albert in 1956 where they raised their family. In 1972 they purchased the acreage east of Prince Albert where they remained until 2015 when they moved back into the City of Prince Albert. They moved to the Stonebridge Crossing Retirement Community in Saskatoon in 2019 to be closer to family.
Bill had many hobbies and interests. He was an active athlete playing hockey in his younger years and golfing and curling well into retirement. He greatly enjoyed the outdoors and was an avid fisherman and camper and there were many family camping trips to northern Saskatchewan and across western Canada. In his retirement he and Mildred made many trips with their trailer to many parts of Canada and the US. He shared many of his interests with his children: cars and trains with Cal, camping and fishing with Daryl, sports with Jeff and the love of animals with Colleen.
He was also involved for a time with Scouts Canada, both as a boy and as a leader when the boys became involved. He often helped out with Camp Tapawingo at Candle Lake where Mildred was on the Camp Committee and which several of his children and grandchildren attended as campers and/or staff. There were also the family cottages at Emma and Christopher Lakes as well as the various cottages of his in-laws at Katepwa Lake, although he much preferred the trailer. Another favourite activity was cruising the lemon orchards (used car lots) on the lookout for another deal.
The acreage also kept him very busy, but it wasn’t all work. The property was part of a former golf course and the house had originally served as the club house. The former fairways were ideal for hiking in the summer and skiing and snowmobiling in the winter. Of course it also served as a private driving range. Sometimes he would cook a meal over an open fire in the bush and bring it back to the house to be eaten. The house had a view of the Prince Albert Airport and he would monitor the air traffic control communications. Of course in the summer there was grass to cut and in the winter snow to plow with his vintage Ford tractor. Many animals also kept him busy. In addition to the dogs and cats there were at various times goats, sheep, chickens, turkeys, geese, ducks and even a horse.
The family would like to thank the staff at Stonebridge Crossing Retirement Community for the exceptional care they provided him with over the past year. A private family service was held May 15 and a celebration of Bill’s life will be held at a later date.
In lieu of flowers a donation to a charity of your choice would be appreciated.