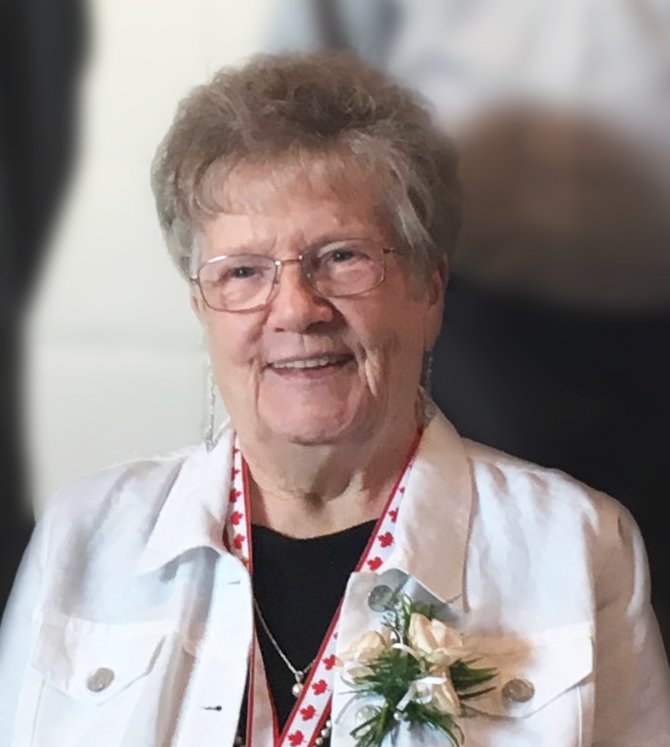 It is with profound sadness and appreciation of a life well lived that we announce the passing of Jean Florence Saunders, formerly Ehr, nee Colborn on May 25th at Oliver Lodge in Saskatoon at the age of 92. She was predeceased by her first husband of 26 years, Gerald Ehr in 1976 and second husband of 30 years, Frank Saunders in 2018; Parents Harry and Reta Colborn; nephew Greg Ehr;  daughter-in-law Sandy Ehr, great-granddaughter Courtney Pilon; brothers-in-law and sisters-in-law Joe (Vera) Ehr and daughter Donna in infancy; George Ehr, Delbert Ehr, Dorothy Ehr; Lorraine  (Joe) Guina; John Loraas; and step-daughter Teri Saunders.
Jean is survived by her seven children Wayne (Debbie) Ehr; Shirley (Marcel) Fontaine; Karen (Calvin) Grindheim; Bryan Ehr; Bonnie (Denis) Keith; Bob (Carol Lee) Ehr; and Cliff (Kathy) Ehr; and the children of Joe and Vera Ehr who made their home with Gerald and Jean after their untimely deaths, Chuck (Georgette) Ehr; Joseph (Darlene) Ehr; Beverly (Mark) Bothorel.  She is also survived by her three stepdaughters Sandra (Allan) Bell; Kathryn (David) Pontarini; Sharon (Jeff) Butler and their children. Also surviving is her sister Joyce Loraas; brothers Keith (Norma) Colborn; Cliff (Marion) Colborn. She is lovingly remembered by 31 grandchildren many great grandchildren and young people who call her Grandma Jean. Also surviving her are her sisters-in-law Pauline Ehr and Rita Ehr and several nieces, nephews and many other relatives and friends.
Born in Delisle on May 22, 1928, Jean lived on the farm north of town and attended Perivil School to Grade XI then took a Commercial course at SK Technical Institute and later worked in the office of Great West Life until her marriage to Gerald Ehr in October 1949. They lived on the farm south of Vanscoy where they raised their family. As a young person Jean played ball on a local team and also played piano in a dance band for several years, enjoying both of these activities. After her marriage she was active in the community working with Church, 4-H, Community Club, and Ag Society and Seniors Club. After her husband’s untimely death she continued on at the farm until the family finished school and then moved into Saskatoon and eventually to Vanscoy to her new home. She kept busy here especially with her flowers and vegetable garden; her pride and joy. She volunteered with Oliver Lodge Activities Group and eventually became a staff member. It was at this time she reacquainted with a friend and colleague of Gerald’s, Frank Saunders and on an extremely hot day, June 4, 1988, they were married and were blessed with 30 years together. They square danced, travelled many miles in their 5th wheel and on bus tours, played shuffleboard in Delisle, and shared many card games with friends. In 2011 they moved to Villa Royale in Saskatoon and enjoyed a number of years there with new friends and more enjoyable activities. Mom had a passion for music, gardening and writing including publishing her memoirs.  She was extremely proud of her large family and treasured the many gatherings over the years. After Franks passing in 2018, Mom’s health declined and she eventually was back at Oliver Lodge, this time as a resident. We are very thankful and appreciative of the wonderful care she has received there since July and also to Kensington Gentle Care Home where she resided for a short period last spring. Our family will miss having Mom’s many friends and family with us to say farewell but we know you will be there in spirit. As the last line in Mom’s memoir reads: “May the Angels carry you home and may you be at peace”.

Share Your Memory of
Jean
Upload Your Memory View All Memories
Be the first to upload a memory!