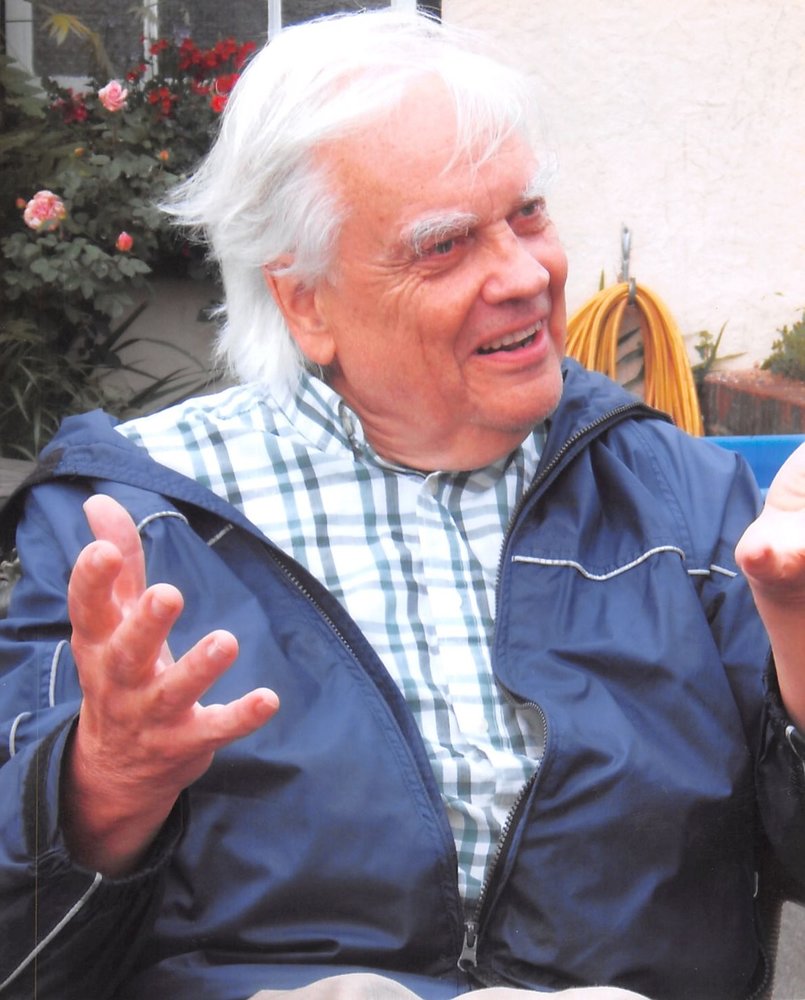 To Watch Live Stream of Service click this link: https://video.ibm.com/embed/recorded/128938443

The University was a large part of Don’s life. It was there, in 1956, that Don met Mildred at St. Thomas More College. They were married in 1960 and just celebrated their Diamond Anniversary in August where they renewed their vows (when asked, “Do you take this woman to be your wife?”, Don replied, “You betcha!”). The event was blessed by Father Paquin and Father Girard.

His was a life well and fully lived. He believed that a piano was only happy being played, a floor only happy being danced on, and a wall only happy covered in art. His life too was filled with others, filled with family and friends. A life deeply involved in community in all its senses. He served the wider community faithfully on the boards of the World University Service of Canada, the Saskatoon Public Library (chair from 1977 to 1982), the Meewasin Valley Authority (as the University’s representative on the founding board of that organization), the Saskatchewan Arts Board, and SaskFilm. He has also been a board member and editor with two regional co-op publishers: Coteau Books and NeWest Press. He was the first chair of the Saskatoon Municipal Heritage Advisory Committee, and served on the committee for an additional five years. He was also the Saskatchewan governor for the Heritage Canada Foundation. As one example of his work to preserve the City’s heritage, he convinced then Mayor Cliff Wright to purchase the Marr residence, used as a field hospital during the Riel rebellion, and designate it as a heritage site

He was awarded the Order of Merit for his lifetime of service to the province and later served as Saskatchewan’s poet laureate for three years. His professional work as a writer, an editor, and as a professor at the University of Saskatchewan will be long remembered (and most collegially) by generations of students, and many, many colleagues, readers, listeners, and audience members.

He is survived by his wife, Mildred Kerr (nee McNamee), and sons David, Bob (Marla), and Bill (Marina), and grandchildren Robyn (Ken), Graham (Janna), Ryan (Dallas) and Kitty; his only sister Lorna Stack and her children (their partners) and her grandchildren; brother and sisters in-law, nieces and nephews; foster family Neil  Batten (wife Linda, sons Anthony and Michael), Charlene Lacombe (daughters Rachelle and Ria), and Robert Badger (son Ethan and daughter Emma) and many many friends.

Predeceased by his parents and in-laws, three brothers in-law, two nieces and a nephew.

His friend and fellow writer David Carpenter said, “If Don were to pass on, it’s almost like Saskatoon would lose its memory.” Fortunately, some of that memory will survive in his many books of poetry, history, and biographies of artists, and in his plays. He read every sermon and every letter home that was published in the Saskatoon paper about the war from 1914 – 1918 and incorporated that into The Great War at 25th Street Theatre. He and Mildred crossed the country so that he could interview sixty of those who had flown in Lancaster bombers (and one Luftwaffe pilot) for Lanc at Greystone Theatre (and over 100 alumni of Nutana for an online blog on the history of the school written to celebrate its centennial). His play at Persephone, Toon Town (a musical written in collaboration with the late Angie Tysseland), which closed Persephone’s old location, included a song for every decade of the city’s existence. For Riverdale BID and with the Chinese community, he wrote Two Gun Cohen for the reopening of the Roxy Theatre. Whether histories, biographies, or fictions, his works grew out of his careful and extensive research – the memories of others, he distilled and filtered onto page or stage.

He donated widely to environmental, wildlife and nature conservancies, and to peace and development overseas. He was also a fervent lover of jazz and the jazz club.

The Kerr family wish to thank the doctors, nurses, support staff, and fellow patients in the dialysis units at St. Paul’s Hospital for the past six years; and the complete caregiving staff and fellow residents of Samaritan Place where he and Mildred lived together for the past five years.

There will be a small family Funeral Service thursday December 17th at 11:30 a.m. and it will be livestreamed. At a later date, when possible, a much larger Celebration of Life (aka “A Right and Proper Wake”) will be held.