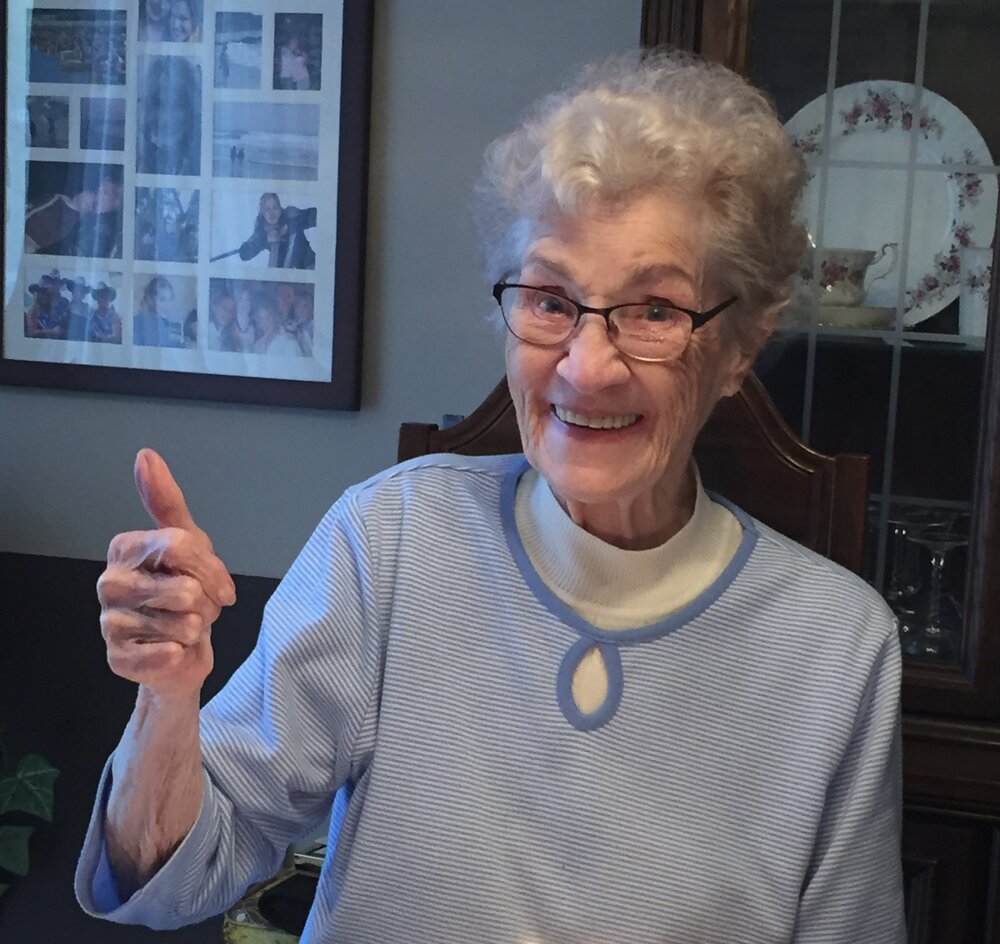 It is with sadness that the family announces the death of Jean Nelson occurred on Wednesday, September 29, 2021, at her residence in Saskatoon Sk. She is survived by her son Donald Nelson (Brita Promane), brother Carl Hanson (Doris); sister Fern Dowse, and grandchildren - Krista Nelson Gougeon, Robert Gougeon, Tyler Nelson and Spencer Nelson, as well as numerous nieces, nephews and other relatives. Jean was predeceased by her parents Harvey and Marie (Hellson) Hanson, her brother John Hanson, brother Gordon Hanson, sisters Mary Kruger and Lil Boothman, loving husband Orville Nelson, son Murray Nelson, daughter Linda Nelson Gougeon, and son-in-law Richard Gougeon.  Jean was born in Mossbank, SK on September 8, 1926. She was raised on her parent’s farm in Expanse, SK. During her working career Jean was employed at Eaton’s Department store in Montreal. As Jean tells the story, Orville and she met at a dance where he stepped on her feet and they were married shortly after on July 14, 1946 in Moose Jaw SK. They lived in Kapuskasing where they began their family with Murray, then Linda and lastly Donald. During their lifetime they resided in Kapuskasing, Montreal, Aurora, ON.  Finally in Saskatoon, SK. Jean was a faithful member of St Paul’s United Church in Saskatoon SK.  Some of her favorite pass times and hobbies – included scrabble, knitting, golfing, casino, sports fan, playing cards, and board games.  Jean will be remembered for her sharp wit and good humour. She will be sadly missed and fondly remembered by her family and friends. Due to Covid-19 gathering and travel restrictions a small family gathering has taken place and Jean’s urn has been laid to rest with Orville at the Columbarium at St. John’s Cathedral. Plans are being made of a Life Celebration Service to be held at a future date and announced in this newspaper.  Condolences may be left for the family on Jean’s Tribute/obituary page at www.saskatoonfuneralhome.com. Arrangements have been entrusted to Saskatoon Funeral Home.

Share Your Memory of
Jean
Upload Your Memory View All Memories
Be the first to upload a memory!
Share A Memory