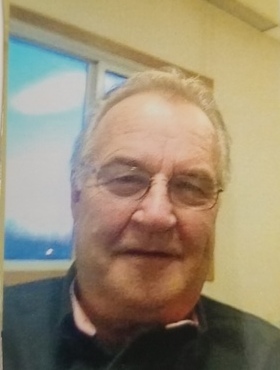 It is with deep sadness that the family of Douglas Frank Denk announce his sudden passing on October 17, 2021.
Doug was born on May 6, 1945 in Saskatoon SK. He lived his first years on the family farm at Dundurn. When he was six years old the decision was made to move to Saskatoon for more educational opportunity. Doug attended school here and also enjoyed playing hockey for many years where he was quite a successful goalie. Later he served with the Saskatoon City Police for a number of years, when he met and married Rose Nykyforak and along with her son Terry, they had two more children Brent and Randy to complete their family. Doug was a devoted father and his grandchildren were his pride and joy. His sense of humor and love of people made a family life full of memories.
Doug farmed with his Dad but found his true passion when he started pipelining in 1971, working for Marine, Majestic and most recently Waschuk Pipeline, where he was a Superintendent for the last decade. All across Canada Doug became well known for his abilities as a Superintendent and his ability to become a leader of men. Doug came into the Waschuk family company and spent the last of his career with Bill, Kevin, and Wes Waschuck.
A quote from Chatter (David), " throughout my career I can not remember a better man and a more dedicated person. A true pipeliner and friend".
Doug loved sports and was an avid fan and supporter of the Saskatchewan Roughriders and Saskatoon Blades.
Thanks to Julie (niece), Brian Fowers, Cory, office staff, Fred and Tara for your much appreciated help. Can not thank all of you but you know who you are.
Doug will be missed and lovingly remembered by his wife Rose, sons Terry, Brent and Randy. Seven grandchildren and one great grandson. He will also be missed by his family of pipeline friends who shared in his life.
Doug was predeceased by his parents Frank and Anne Denk and mother in law Anne Nykyforak, two sisters Helen Zacharias and Margaret Bueckert.
A celebration of Doug's life will be held at a later date this summer.
On memory of Doug please play the song "Something You Get Through" by Willie Nelson.

Share Your Memory of
Douglas
Upload Your Memory View All Memories
Be the first to upload a memory!
Share A Memory